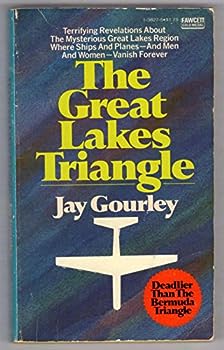 Speculates on the causes of the reported, and reportedly unexplained, disappearances of hundreds of ships, boats, and aircraft in the Great Lakes region. This description may be from another edition of this product.

I had this book

Published by Thriftbooks.com User , 19 years ago
I found it very interesting. The planes just flew into Lake Michigan on a clear night. Ships just sank. The wreck of theEdmund Fitzgerald, of which Gordon Lightfoot sang in the1970s, was real. In November 1975, the Edmund Fitzgerald,a Great Lakes ore carrier with 29 crewmen, sank on LakeMichigan. She sank in the worst storm in over sixty years.The Edmund Fitzgerald was traveling in tandem with another ore carrier, the Arthur M. Anderson, when she sank.The Discovery Channel had a special about her in the '90s, and they had a salvage team raise the ship's bell. A plaquerests on the bottom of the lake.

Best of the 70's triangle books

Published by Thriftbooks.com User , 22 years ago
This book,titled to cash in on the hugh sales that Bermuda Triangle-Devil's Triangle type books were enjoying at the time,is actually quite entertaining. It actually can be a little eerie at times. Reasonably well reasearched unlike most of the other triangle books. About vanished ships and planes in the great lakes area. Some very interesting stories here. A good read. Note: there is a similarly titled book by an author named Hugh Cochran,which came out shortly afterward. Avoid this one as it is a lame copy.
Trustpilot
Copyright © 2022 Thriftbooks.com Terms of Use | Privacy Policy | Do Not Sell or Share My Personal Information | Accessibility Statement
ThriftBooks® and the ThriftBooks® logo are registered trademarks of Thrift Books Global, LLC