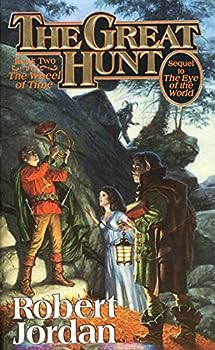 The Wheel of Time is now an original series on Prime Video, starring Rosamund Pike as Moiraine! In The Great Hunt, the second novel in Robert Jordan's #1 New York Times bestselling epic fantasy... This description may be from another edition of this product.

Published by Heather , 7 months ago
I love the story. I’m eating this two stars for the function of the book. It’s small and letters close so doesn’t stay open. Have to use my small pinky to keep open and the whole thing is a strain on my neck. I Guess this is 40. The movie novel was a much better hand feel and easier to read. It was much wider and remained open on its own when I sat at the table to read. I hate tiny books.

Amazing sequel has me itching for the third

Published by Benji :) , 2 years ago
Although the first book (The eye of the World) took me around a year to read on and off, I flew through The Great Hunt in a month. Everytime I put the book down I yearned to pick it back up again.

Published by Lisa , 3 years ago
This is a great book!

Published by Thriftbooks.com User , 19 years ago
I Promise: I'm going to be spoiler free.This is the second book in the Wheel of Time (WOT) series (after Eye of the World). It is BETTER than the first one. Jordan is really finding his legs with the series. All of the tenants of excellent fantasy are here. Jordan is a great writer who builds an incredible world with a compelling history. His characters are also incredible. Great Hunt is a great book, but be warned: as of this writing Jordan hasn't finished WOT. The Great Hunt does not stand alone, the ending is something of a cliffhanger. My guess is the end of this series isn't going to happen until 2006 (I believe there are going to be 12 books, but I don't think there's an official word).Is it going to be worth it? I don't think so. WOT has gotten very complicated and is becoming turgid. Sometime around Book 6, the action began to crawl. Book 8 (the last one I read) was almost 700 pages and took place over three days, AND was practically missing some important characters! I've read the first five books twice now beacuse it is too difficult to wait a year between reading books. (And he's coming out with them once every other year at this point).My advice: Wait until Jordan's finished them all. It's best to read them one after another. By then we'll know if it was worth the wait.You've been warned!My grade for the series:1. Wheel of Time: A-2. Great Hunt: A3. Dragon Reborn: A+4. Shadow Rising: A+5. Fires of Heaven: A6. Lord of Chaos: B7. Crown of Swords: C+8. Path of Daggars: C9. Winter's Heart (haven't read, waiting for Jordon to finish)

Published by Thriftbooks.com User , 20 years ago
I eagerly anticipated getting to this book, especially after having spent so long trying to wrap up the first in the series. It is really more the first book than "Eye....", which seemed more of a introduction into the world of Jordan. You don't even necessairily have to read the first book: the characters and their back-stories are all explained, not too great length, but enough to get a good idea. I'd suggest reading EOTW anyhow, it's a good piece of literature. This is the continuation of th WOT series, and is basically the platform on which to set up Rand al'Thor and his future. In fact, a more appropriate title would be "The Book of Rand", since the other characters generally sit around, watching and waiting for the next move. Perrin, my favorite character, doesn't really make the kind of advancements that I would have liked, and Mat is still basically as he was at first, not quite realized, just a stock character of sorts, although he is one of the main reasons for the story to go on, and he has a good role in the ending. Nynaeve becomes a bit more likable, a bit more tolerable, and Egwene is more fully realized. Moiraine and Lan don't have much of a role here, although you do find out more about them. Also, a character comes back from the dead.... As with the first book, I have a serious bone to pick with Rand. His stubborness and his refusal to accept the truth are very irritating and somewhat nerve-wrecking. I found myself wanting to slap him on numerous occasions. He does somewhat become more enjoyable towards the end, and he has noble enough reasons for doing a lot of the things he does. A main element of the series so far seems to be the beauty of friendship, loyalty, love. Another is the conflict between good and evil. This novel doesn't seem quite as long as the first, and I was able to complete it in a few weeks. Keep in mind, I have a LOT of free time. If you had 6-8 hours of steady reading time every day, you too could finish it in about that much time, but otherwise it could be a matter of months. The finale alone is worth sticking along with the tale for. As would be expected, the book ends, when you would like it to keep going. Fortuately, there are many more to be read, and I am going to be starting "The Dragon Reborn" very soon. All in all, it's fantastic read, and I recommend it highly.

Published by Thriftbooks.com User , 21 years ago
I have a confession to make...I started reading Robert Jordan's The Wheel of Time series out of order, and was instantly hooked by Book 2. The Great Hunt is what brought me back to reading science fiction, and am I glad that I have returned. I have not been so enthralled by a series since Anne McCaffrey took readers to the planet of Pern, and introduced them to dragons. After meeting with some of the main characters(Rand, Egwene, Lan...) and fighting with them from Fal Dara to Tanicho, I was hooked. Robert Jordan's characters seem to come alive as I read through this book page after page, and I was glad that I got to travel with them through their various adventures, as they fought Trollocs, talked to wolves, and met with the Seanchan. Robert Jordan has set the Wheel of Time turning, creating a wonderful new Pattern for readers to follow.I am glad that he is the reigning master of science fiction. I have read several pieces of science fiction while waiting for copies of his series to be returned at my local library, and none come close to his spinning of the Wheel. One of the wonderful things about his books are the fact that it doesn't matter where you begin...the Wheel never stops turing, and according to Thom Merrilin, there is always a story to tell.I hightly recommend The Great Hunt to all lovers of adventure. And while you are at it, feel free to read the rest of the series as well!

A Great Second Book for this Remarkable Epic Fantasy Saga

Published by Thriftbooks.com User , 21 years ago
The second book in Robert Jordan's epic "Wheel of Time" saga is another fantastic book in this series. Set in the most vivid fantasy world ever created, Jordan takes readers further into this world, weaving new plotlines, introducing new characters and growing the roles of characters first met in "The Eye of the World". This series continues to work on multiple levels, containing nuances which have clearly been missed by the few critics of this series. (Critics of this series often focus on its length, reminding one of the emporer in "Amadeus", who complained that Mozart's concert had "too many notes.")In the first book, Rand, Perrin and Mat, 3 young men from the village of Emond's Field were forced to flee from minions of the Dark One, accompanied by Egwene, a village girl who wanted adventure, and Thom Merrilin, a gleeman who had come to the village to entertain at the village's spring festival. Guided by Moiraine, a member of the mysterious order of Aes Sedai, women who can channel "saidar", the female half of the One Power, and Lan, Moiraine's Warder, the group was soon joined by Nynaeve, the village's Wisdom, who had followed them to protect the young people from her village who had been had been swept up in an Aes Sedai "scheme". The group, minus Thom, would eventually be joined by Loial, an young member of the long-lived race of Ogier, a gentle giant of a bookworm who had left home to see the world.One of the joys of the first book was the maturing of the characters, all of whom would change in significant ways: Perrin discovered he could talk with wolves, and now has the yellow eyes of wolf, and has also run afoul of the Whitecloaks, an intolerant military order of zealots; Mat had been uttering the Old Tongue in moments of battle & stress and was then tainted by a cursed dagger from the foul city of Shadar Logoth; Egwene discovered she had the ability to channel and now desires to become an Aes Sedai; Nynaeve learned that she could already channel, having survived what only one in four women do, channeling on her own without Aes Sedai training; Nynaeve has also fallen in love with Lan, a love he also feels, but does not believe he should return; and Rand has discovered that he is a man who can channel. Men who channel inevitably go insane, and have ever since the breaking of the world some 3,000 years ago."The Great Hunt" picks up shortly after the end of "The Eye of the World", with everyone in the borderland town of Fal Dara. The Amyrlin Seat, Siuan Sanche, head of the female order of Aes Sedai, arrives, purportedly to meet with the three young men from Emond's Field, all of whom are "ta'veren". A person who is "ta'veren" has a certain ability to manipulate events and chance, e.g. a leader who intends to reject a treaty might end up signing it. But the Amyrlin has arrived for reasons of her own, with plans she means to make with Moiraine.But before any of these plans can be implemented, a sudden raid by Trollocs and Myrddraa

Engrossing and more development than the previous venture

Published by Thriftbooks.com User , 22 years ago
The Wheel of Time books were introduced to me by a friend, and once I started, it was wildfire. I admit that Jordan likes to rant, he likes to put 50+ main characters in his books, he likes to stray. But unlike many of the other authors who do this, you don't really notice and most of all, you actually ENJOY it! I was enthralled by the fact you were enlighted on the training procedures of the Aes Sedai, the military strategy and downfall of the Seanchan, the prejudicial workings of the Children of the Light. I love this stuff. It makes the characters real, it gives them more structures and basis for being where they are, thinking how they do, and reacting to situations differently than the rest of them. Each page fills you with more insight than the first. I cannot wait to finish The Dragon Reborn (the next book), and will eagerly await and read anything that Jordon publishes in the future. If there is an end, I don't see it in sight any time soon. Long live these books!
Trustpilot
Copyright © 2022 Thriftbooks.com Terms of Use | Privacy Policy | Do Not Sell or Share My Personal Information | Accessibility Statement
ThriftBooks® and the ThriftBooks® logo are registered trademarks of Thrift Books Global, LLC