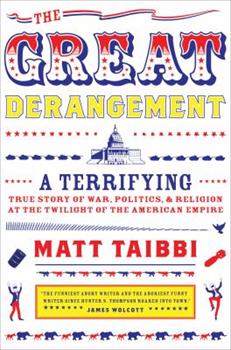 The Great Derangement: A Terrifying True Story of War, Politics, and Religion at the Twilight of the American Empire

Rolling Stone reporter Matt Taibbi set out for Washington in 2005 to find out how laws are made in twenty-first-century America, but soon realized there are two sides to this story: on one side, the Pit, a frivolous and isolated Congress where the laws are made; on the other, the howling madness of the rest of America, where the effects of our politics-of-the-absurd play out in real lives. To get at this wider story, he embeds himself with other key...

the view from Texas

Published by Thriftbooks.com User , 13 years ago
I've lived in every corner of the continental United States and Hawaii, but about half of my 62 years have been spent in various cities large and small in Texas. Few writers have managed to capture the creepy folksiness, the numbing intellectual disconnect, and the vicious religiosity of Texas as well as Matt Taibbi. His acutely observed description of Hagee's San Antonio mega-cult is spot on. The author gleefully picks the chunks out of the mind vomit of homophobia, militarism and apocalyptic whackology such outfits specialize in, and clearly identifies how Hagee uses support for Israel (to be carefully distinguished from sympathy for Jewish people) to make powerful political connections. This is a marvelous LOL examination of the intersection of religious and political sleeze in an America that's DOA.

Published by Thriftbooks.com User , 14 years ago
Much of the book focuses on the insider game in Washington, the non-functioning government bent on both sides twisting reality while continuing to rake in millions from big business. Meanwhile, Boeing, G.M., and Ford are headed towards becoming Chinese companies, and OPEC is likely to begin trading in the Euro. In between safaris into our government, Taibbi also reports on his immersions into both far-Right evangelical religion and far-left (?) 9/11 Truthers, finding them both living in an imaginary world. The common link in all this nuttiness - Madison Avenue and its world of make-believe messages and promises. It was shocking to read that the "06 election saw political parties spend $160 million on negative ads, vs. only $17 million on the positive. Debate has mostly been removed from the House schedule - 79% of all bills passed during the Republican's recent majority were "suspension bills" where only 40 minutes of debate are allowed, no amendments can be offered, and a two-thirds majority is required for passage. The Rules Committee can completely rewrite what passes the committee of jurisdiction (usually in the middle of the night) to include anything leadership knew could not survive public discussion. House members are supposed to have 3 days to read the Rules Committee output before it goes to a vote, but this has been waived in "emergency." Thus, virtually every bill passing the House during the Bush-GOP majority years was voted on just hours after emerging from Rules. Conference Committees again can totally rewrite the bill (majority vote of members not required for passage) and again send the bill out for vote with only a few hours' notice. Moving on briefly to the Army, Taibbi reports that their camaraderie is real - for a lot of them their unit is the best family they had, they are basically lonely. He also makes a similar observation regarding the far-Right evangelicals in Texas in which he immerses himself (including baptism) while revealing their inanity. Then its the 9/11 Truthers - a 2006 poll cited found 36% believed our government either "did" 9/11 or consciously allowed it, despite the preposterousness of their thinking. Finally, Taibbi asks: "What about our corrupt medical insurance system, disappearance of the manufacturing economy, exploding prison population, takeover of politics by financial interests?" After setting aside those believing in aliens on earth, etc., it looks like there's not enough sanity left to care!

Published by Thriftbooks.com User , 14 years ago
Fresh view regarding the world at large. You laugh, you cry, it becomes a part of you. It may be an eye opener for some, but for me as I read, I was more relieved someone else was seeing it all besides me. If I had to guess, from Tabbi's accounts, thats exactly why he wrote this book, as if to say "Is anyone else seeing this.."stuff"..besides me?" Lol. He brings out the good the bad and the ugly of America. Well done.

Published by Thriftbooks.com User , 14 years ago
i bought this for laughs and just plain meanness, but i was pleasantly surprised to find limited name calling and abundant compassion. taibbi truly goes soft here. he really gives the church a fair shake and explains why it is so appealing to so many. he doesn't pull any punches with the anti-environmentalist son of john hagee, though. He really touched on some good points during his trip to camp cuervo in baghdad. he was right about his military views and that the good things from the army are similar to the good things of the church. the church thing with laurie and janine was great and it reminded me of joe dirt telling his story to dennis miller. i want to know more and i need to find out if he ever spoke with laurie again. great book! of course, there are less serious moments like when he is about to "witness" at the mall and is standing outside the front door praying with his group. i cant give that one away. his description of the "way of the master" series was LOL funny. BTW, the left is comparibly insane to their counterparts on the right with the 911 thing. why do they get so fixated on that one anyway? why not fixate on the anthrax? you could actually get somewhere with that. this was awesome and easily his best work to date. buy it now, religious or not. it is truly for everyone(in my opinion).

Published by Thriftbooks.com User , 14 years ago
Got this book Monday, May 5th. Finished it once ... going back again. Matt reveals the absurdity that has this country by the throat. As a former church pastor, the narrative on Matt's adventure with John Hagee's nut bunch was point-on. This book is laugh-out-loud funny but what it reveals is very sad. This book should be required reading in every freshman high school and college civics/polysci course. It's interesting and ironic that Matt Taibbi, Don Imus, Bill Maher, and a very few others may save us from ourselves yet. Thanks guys ... from our kids ... and theirs.
Trustpilot
Copyright © 2022 Thriftbooks.com Terms of Use | Privacy Policy | Do Not Sell My Personal Information | Cookie Preferences | Accessibility Statement
ThriftBooks® and the ThriftBooks® logo are registered trademarks of Thrift Books Global, LLC