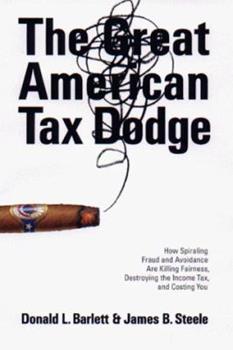 The Great American Tax Dodge: How Spiraling Fraud and Avoidance Are Killing Fairness, Destroying the Income Tax, and Costing You

The authors of America: Who Really Pays Taxes? present a groundbreaking examination of the federal income tax system as they predict how the end of the progressive income tax will change America forever.

The Essence of the Argument is There...

Published by Thriftbooks.com User , 18 years ago
While there are some short-comings with this book, the overall general idea rings true, and their evidence supports the claim. The book does not aim to be a fix-all for the numerous troubles that ail american democracy. Rather, it simply aims to expose yet another example of class preference in American society.Like the legal system, the tax code works more to one's advantage the more money one has. That is the simple premise of the book - not government gridlock, not class jealousy, and certainly not socialism. The authors argue from the simple point of showing how wealthy individuals take great advantage of our tax code. And while it does suggest a certain conclusion, I would argue that it is common sense and logic that they use to arrive at the fact that this is but one more way the wealthy absolve themselves of any responsibility in society.In the end, it is an informative read, but should not be taken by itself. It should be read in conjunction with other works on the tax code, gov't spending, and other problems that plague American society and allow the wealthy to keep distancing themselves, and avoid responsibility.

Published by Thriftbooks.com User , 21 years ago
Barlett and Steel won two Pulitzer prices for journalism so you know their work is high quality. This book will offend some readers, especially the devious rich and the gray-area almost-crooks. But I hope it will anger the hard working stiffs in the middle class who still believe paying taxes is the price of having a good society. The authors make a convincing case that Congress does not care to make the system just or fair and that America is in danger of moving toward the Banana Republic and some-European-countries model where if you pay your taxes honestly you are considered a fool. How bad it has gotten can be seen in the case of our famous former president, who managed to leave his presidency in such a sleazy way. The book came out last fall and maybe Bubba read the pages on Marc Rich, who could be described as a crook and an enemy of America. But that didn't stop our president from granting him a pardon. Could a $450,000 donation to the Clinton library and some $150,000 donated to Hilary's senate campaign have anything to do with that? Of course not. I give this book five stars because it is well researched and well written, fascinating from beginning to end. See what a boon the Internet has become for tax cheats. See how venerable Swiss banks are only too happy to help you hide your undeclared income. See how Congress crippled the IRS. We now have the best government and representatives money can buy and nobody cares. Almost nobody. A man like Sen. McCain is a miracle, because he is one of the solutions. Read this book. It's terrific.

As long as I don't get caught, it's okay.

Published by Thriftbooks.com User , 21 years ago
Before I read the book, I had the (mistaken) belief that all income tax evaders had an equal chance of an IRS Audit. I now see that the IRS is set-up to audit citizens that can't afford lawyers--the book has good evidence for that, the kind you can find for yourself. Unfortunately, the book isn't totally solid. It rightly points out that the current tax system is unfair for the un-wealthy, and I think the authors provide fairly good evidence that this unfairness is largely due to a congress that has created a behemoth tax code while simultaneously stripping the IRS of its ability to enforce it. Unfortunately, though, there were times that some claims went un-referenced (e.g., past tax code), which left me wondering about what was "factual." The book is biased towards blaming the wealthy for lobbying congress while dumping billions into tax shelters (this bias, nonetheless, seems well supported), but the book isn't about wealth bashing--it is about the notion that in our country, to some extent, we are all our neighbor's helper, and to cheat taxes is morally incomprehensible and consequential. They point to the ills of society fostering an environment for cheaters of all kinds...from tax evaders to cheating college freshman, as evidence for the cheater's mentality. In this regard, the book has a pessimistic view of a human nature that always reduces itself to the "lowest common denominator" (i.e., if the wealthy cheat on taxes, why shouldn't I?). The authors pose good arguments against flat taxes and sales taxes, while supporting a progressive tax such as our current tax structure. They argue that the current tax code is too complicated and should be simplified. This complication is largely do to the history of special interest groups successfully lobbying for tax loopholes. Overall, I know more about taxes (and tax evasion) than I had before the book.

Read this before you vote!

Published by Thriftbooks.com User , 21 years ago
Just read the last two chapters, "How Congress plans to increase your Taxes" and the final chapter on their solution. These authors show how Congress is crippling the enforcement of tax cheats by the rich, even granting them loopholes so they pay even less than they should. The flat tax and national sales tax are shown to be the shams they are, the rich will get very rich and the poor and middle class will take the burden of the lost taxes from the rich. Don't believe me, read the book. Why did Warren Buffett endorse Gore saying he (Buffett) pays less taxes than his secretary? Because this is all true, Congress has always made the tax laws favor the rich, hiding it in complex regulations that only the rich can afford the lawyers and accountants to figure out. They pay less taxes and now the Republicans want to make the income tax so difficult that the rest of the country can be sold a bill of goods that repealing the income tax and putting in a flat tax will help the middle class instead of the truth that it will devastate the middle class. Buy the book, get the book from the library, but read the book before you vote!

Published by Thriftbooks.com User , 22 years ago
The authors just added to the indignation I share with fellow citizens over the failure of the rich and powerful to pay their fair share -- or even not to pay anything. It is a corollary that capitalists love to play with other people's money. It is also a habit to force the tax burden on to those less able to defend themselves politically. Perhaps we have to have a complete tax revolt and abandon withholding tax. The rich would have much to lose in anarchy.
Trustpilot
Copyright © 2022 Thriftbooks.com Terms of Use | Privacy Policy | Do Not Sell or Share My Personal Information | Accessibility Statement
ThriftBooks® and the ThriftBooks® logo are registered trademarks of Thrift Books Global, LLC