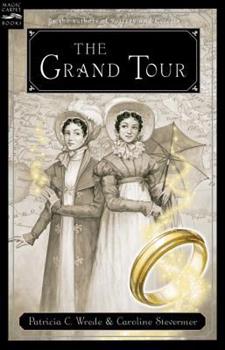 The Grand Tour: Being a Revelation of Matters of High Confidentiality and Greatest Importance, Including Extracts from the Intimate Di

(Book #2 in the Cecelia and Kate Series)

Kate and Cecy and their new husbands, Thomas and James, are off on a leisurely tour of the Continent. But once they arrive in France, strange things start to happen. Cecy receives a mysterious package, Thomas's valet is assaulted, and Kate loses a glove. Soon it becomes clear that the newlyweds have stumbled upon a magical plot to take over Europe, and they must embark on a daring chase to thwart the evil conspiracy. There's likely more trouble ahead--for...

What an AWSOME book!

Published by Thriftbooks.com User , 14 years ago
I suggest checking out all three of Cecelia books. They are just great. A little magic, a little mystery, a little romance, makes a LOT of these books. It is probably one of the best series since Harry Potter and Charlie Bone, but this one is written about two young WOMEN! If you like the stylings of historical romance novels, but without the naughty parts, then you should really read this series!

Published by Thriftbooks.com User , 14 years ago
The Grand Tour (2003) is the second Historical Fantasy in the Cecy & Kate Series, following Sorcery and Cecelia. In the previous volume, Miranda found her full age catching up with her and Kate told a bouncer to the Prince of Wales. Then Sir Hilary captured Cecy and James, but Aunt Elizabeth and Mr. Wrexton showed up unexpectedly. While Sir Hilary was fighting off the intruders, James clouted him with a chair. After Kate told off Aunt Charlotte (and infuriated Georgy), she found enough time to discuss marriage and love with Thomas. Cecy also coaxed a proposal out of James. Then Mr. Wrexton proposed to Aunt Elizabeth. The three couples were married within three weeks after some hasty posting of banns. Since Kate's father had died five years before, Arthur Rushton gave away both his own daughter and his niece. However, Aunt Elizabeth apparently gave herself away to Mr. Wrexton. In this novel, in the fall of 1817, Lady Sylvia is returning to Paris after the weddings. Kate and Thomas are planning on traveling with her and then extending their honeymoon excursion to other cities on the continent. They invite the Tarleton couple to travel with them. As usual, James is initially reluctant, but Cecy convinces him to accept the offer. Still, James insists on discussing the trip in more detail with Thomas over drinks at the club. Lady Sylvia is eager to return to Paris and the party travels straight to Dover. Since the winds are against them, the party spends the night in a local inn and catches the packet boat first thing in the morning. Cecy is dismayed to find herself very seasick. Lady Sylvia explained that mal de mer is common to partially trained mages, but the problem should cease after she learns the orisons and invocations. Also, creating a focus for herself should help. At Calais, the packet ship had to anchor offshore since quays had not yet been built to accommodate the influx of travellers. The party is taken ashore in small boats and then carried through the surf by teams of brawny men. They reached dry land with barely a sprinkle of spray drops on their clothes; except for Kate, of course, who manages to wet the whole front of her skirt. Since Cecy was still weak from the voyage, they decide to spend a few days in Calais before continuing on their journey. They receive an alabaster flask of oil from a middle-aged woman who only refers to herself as the "Lady in Blue". Then they have dinner with Beau Brummel and ceiling plaster falls onto their table. The dinner is resumed outside -- minus the fish course -- and the conversation continues. Before leaving, Brummel advises Thomas to create a new focus as soon as may be. After the dinner with Brummel, Lady Sylvia retires to her chambers, but is wakened by an intruder. The person leaves so precipitously that a slipper is left behind. Later, the slipper is traced to Lord William Montjoy, who reports both slippers and a dressing gown stolen from his rooms. This in

Published by Thriftbooks.com User , 15 years ago
A couple of unenthusiastic reviews of this book made me wait till the paperback came out, but when it did, I was very pleased. In fact, I found this book more fun and MORE satisfying than The Enchanted Chocolate Pot.

Finally! The sequel is out...

Published by Thriftbooks.com User , 17 years ago
Personally, Sorcery and Cecelia is one of my favorite books. So, I was obviously thrilled when Ms. Wrede and Ms. Stervemer announced they were writing a sequel. I wasn't disappointed. While this book isn't quite as memorable as Sorcery and Cecelia, I still loved it. The way the plot moves is different than its predecessor, but it made it seem better to me. Cecy's entries are part of an official document she must write, while Kate's entries are from her personal journal; these two styles tie together very well. I like the "mystery" type style that goes through the book. I thought it was a great story line, and I really enjoyed it. This book is so much fun to read because it does have a good story line but it also stays fairly true to the time period. I think that everyone will at least like, if not love, this book. It's also a great book to reread along with Sorcery and Cecelia.

Enjoyable sequel, but lacks some of the flair from the first

Published by Thriftbooks.com User , 17 years ago
I would certainly not say this is a dissapointing sequel, but at the same time, it did not quite live up to my expectations, either. After eagerly awaiting the Grand Tour, I rather assumed it would be extremely similar to Sorcery and Cecelia. However, in Sorcery and Cecelia, where neither Kate nor Cecelia appear extremely distressed by the predicaments on hand, the Grand Tour seems a bit more solemn, while Sorcery and Cecelia always had a very light, jovial tone. Futhermore, the bond between Kate and Cecelia appears not quite as strong as it was when they were writing letters. Perhaps this is becasue they are now more allied with their husbands than with each other, and Thomas (one of my favorite characters from the first) looses some of his trademark cynacism, (and thus his edginess as well) because he is now married and has to be kinder to Kate. The plot itself only bothered me a little because of the historical connection, and anything that seems as though it could possibly change the outcome of history I find a little bothersome. (Of course no real change happens). All in all, it was a fine sequel, but I wonder whether the reason I enjoyed it as much as I did was because I had Sorcery and Cecelia to support it. Personally, I adored the Enlgish setting from the first, and found the villians more interesting than in the Grand Tour. However, if you do not expect this book to exactly mirror its predecessor, and are somewhat forgiving, there is no reason why you cannot enjoy this one as well.
Copyright © 2020 Thriftbooks.com Terms of Use | Privacy Policy | Do Not Sell My Personal Information | Accessibility Statement
ThriftBooks® and the ThriftBooks® logo are registered trademarks of Thrift Books Global, LLC