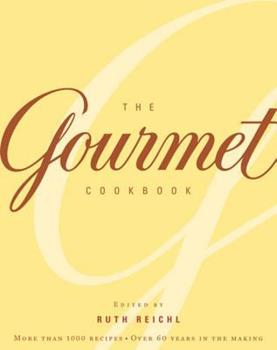 The Gourmet Cookbook: More than 1000 recipes

For the past six decades, Gourmet magazine has shaped the tastes of America, publishing the best work of the foremost names in the world of food. To create this landmark cookbook, editor in chief and celebrated authority Ruth Reichl and her staff sifted through more than 50,000 recipes. Many were developed exclusively for Gourmet's test kitchens. Others came from renowned food writers and chefs and from the magazine's far-flung readers. Then the editors...

Published by Thriftbooks.com User , 5 years ago
We had this and several others including the Joy of Cooking and the Better Home and Gardens cookbook that was my grandmothers when I was growing up. This one was newer and we got it around the time I started I being interested in cooking. This is hands down my favorite go-to cookbook out of the three main ones we had. I didn't use the others once I had this. My uncle was the one who picked it out, he was attending school to be a chef at the time and used it regularly as well. So it is easy enough for a high schooler to use and comprehensive enough for chef school attendee to use as well. Bonus, the brownie recipes in this book are the best I've yet to find one I like better.

It's not supposed to be The Joy of Cooking

Published by Thriftbooks.com User , 15 years ago
I recently moved to Mexico, and as weight and customs tariffs limited my importation of books, I chose this cookbook to be my overall basic resource. I have been glad ever since that I left my "Joy" behind, along with my "Best of Cooks Illustrated" and the Childs volumes. Unlike B. Marold, I have not been disappointed by any of the recipes I've tried, and I've been delighted to find so many of them to be Latin or Caribbean themed, so that I can use the products most readily available here yet branch out from the usual Mexican fare. To complain that the omelet-making or brioche-making techniques are not what they would be in a teaching volume is to ask more of this compendium than what it is: the best recipes published in Gourmet Magazine, period. I find the sidebars useful and the unfortunate yellow titles a minor irritant. The index is excellent, which is not often the case with cookbooks. Everything for which I've needed a recipe I've found in one way or another through it. Try the Cuban Roast Pork Loin; the Avocado, Orange, and Jicama Salad; the Beets with Lime Butter! My only complaint is that several times I've proceeded with a recipe and added all of an ingredient only to discover that some of that ingredient was to be saved for a later step. I've since learned to read more carefully through a recipe before plunging in.

Published by Thriftbooks.com User , 16 years ago
For me, the true measure of a cookbook is how easy it is to follow the recipes and how tasty the resulting food is. This book easily fulfills both these criterias. The recipes are easy to follow for modern cooks. The measurements are good (1 tsp instead of 1 1/8), the list of ingredients practical and seldom or never fussy, the tips include steps in the preparation that can be done in advance, and the procedure are streamlined and still sufficient (they don't shy from using ziploc, or blenders, or food processor). Most importantly, the recipes work! The food i've made following the proportions and methods as written (most of the time) in the recipes have all been flavorful and a pleasure to serve and eat. Some reviewers have judged this cookbook with out trying out any of the recipes in a kitchen. Huh? I also noticed that their recipe may not be "traditional". One of the reviewers used the example of Chicken Adobo where they only use chicken legs instead fo the traditional whole chicken. Or their Tres Leches recipe included the use of the very untraditional coconut milk. To me these are innovations. Using a whole chicken for adobo is not great since some of the white meat will dry out during the cooking. And adding coconut milk to the tres leches made the cake divine. This book brings joy to cooking (ha!)

Published by Thriftbooks.com User , 17 years ago
I looked at this book at the bookstore and decided against buying it because the yellow titles bothered me. I was surprised then to receive it as a birthday gift a couple of weeks later. I am so glad, because it really is a fantastic collection, and I guess I've grown accustomed to the yellow; I don't even really notice it now. And I have been reading this book quite a bit. I have about 300 cookbooks but in the past few days, especially when cooking for Thanksgiving, I've reached for The Gourmet Cookbook rather than search through all the others for something in particular. The introduction to each recipe is engaging and informative. I made the All-Occasion Yellow Cake twice in the past two days because it took a very few minutes to make and my sons went crazy for it. All in all, if you love cooking and recipes and food, you'd be doing yourself a disservice to bypass this book.

Look beyond the yellow typeface

Published by Thriftbooks.com User , 17 years ago
I think the reader should be willing to look beyond the yellow typeface and see all the wonderful features of this book. First, I've tried at least ten of the recipes and they all have been easy to follow and delicious. These recipes have been tested, and tested, and tested. The editors did their due diligence. Second, the tips and techniques section has all the little stuff you should know to make cooking easier...it's only four pages. Read it and remember and know it is there as a reference later. Third, the glossary, despite what grouchy reviewers have said, is thorough AND the glossary ingredients are included in the index. Fourth, the index is one of the most comprehensive indexes I have seen. Has anyone remarked on the fact that you can look up an ethnic cuisine and find EVERY RECIPE in the book that falls under that particular cuisine? In a mood for an Indian recipe? There are fourteen of them in the book...just look up "Indian dishes" in the index. Scandinavian? Thai? Vietnamese? Just look in the index to quickly see the list of all of them. What other cookbook index bothers to do this? And despite what other people have said, the index IS thorough, well-organized, and in a sufficiently large font (a New York Times review of the book praised the index). The famous "sticky buns" recipe is actually named "Pecan Currant Sticky Buns" and can be found in the index under "pecans", "currants", and "breads (under subentry "buns"). If one looked under "buns" or "rolls" to find this recipe, the index has anticipated this and given you a reference "buns and rolls. See breads" with the same reference if you look up rolls. The index is great about indexing minor ingredients. Just bought some saffron and want to use it before it loses it's freshness? Look up saffron and there are NINE recipes in the book that use saffron...all listed right there. I think this is one of the most user-friendly large cookbooks I have come across in a long time.
Copyright © 2020 Thriftbooks.com Terms of Use | Privacy Policy | Do Not Sell My Personal Information | Accessibility Statement
ThriftBooks® and the ThriftBooks® logo are registered trademarks of Thrift Books Global, LLC