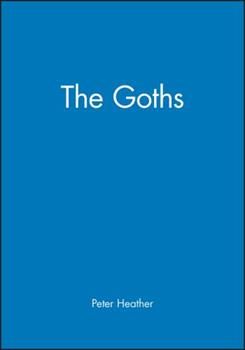 (Part of the The Peoples of Europe Series)

The volume is divided into three parts, corresponding to the three main phases in Gothic history: their early history down to the fourth century, the revolution in Gothic society set in motion by the arrival of the Huns, and the history of the Gothic successor states to the western Roman Empire. At its heart lies a new vision of Gothic identity, and of the social caste by whom it was defined and transmitted.

An excellent replacement for Wolfram

Published by Thriftbooks.com User , 12 years ago
In a relatively few years, Heather has become perhaps the leading living expert on the Goths during Late Antiquity and the early medieval period, and especially on their relations with the Roman Empire. This is also one of the best entries in the long-running and high-quality "Peoples of Europe" series, which makes it doubly worth reading. The last survey (in English) of the whole three centuries of the Gothic period was published in 1888, and not much really new literary material has come to light in that time -- but the sheer quantity of archaeological discoveries regarding the Goths in the past century is phenomenal, and the author seems to have attempted to take all of them into account. Our principle source for Gothic history has always been Jordanes, a 6th century Gothic government bureaucrat in Constantinople who became an amateur historian after retirement, and whose treatment of the "barbarians" leaves a good deal to be desired. Heather reconsidered Jordanes's work in his first major book, Goths and Romans, published in 1991 and based on his dissertation, and he continues that rethinking process here. The book's organization is straightforward: An introductory chapter on the "Gothic problem" -- who were they, really, and did they really feel the self-identity we've assigned to them? -- is followed by three parts. The first investigates the origins of the Goths, almost certainly on the shores of the Baltic, and their early kingdoms. The second follows the Goths in the trail of the Huns, their early relations with the Romans, and the ways in which they transformed themselves into a nation to be reckoned with during most of the 5th century. The third part considers the later Ostrogothic and Visigothic kingdoms in Italy and Spain, and why they eventually failed (a matter of both internal and external forces). Two appendices discuss Procopius's view of the Goths (not to be trusted, the author believes) and the place of non-Goths in the Gothic army. The bibliography is quite extensive, especially for books in this series. There are numerous illustrations (none in color, unfortunately) and the author's style, while academic, is perfectly comprehensible, even for the nonspecialist. Anyone beginning a study of the Goths, or even of the centuries of the Germanic migrations generally, really has to start with this book.

Trying to Get a Grip on Roman History

Published by Thriftbooks.com User , 13 years ago
This is a fantastic book. I can't complement Peter Heather enough on his knowledge and analyses of Goth and Roman interactions. He has a point of view: that the movement of the Hunns into Gothic territory set in motion the eventual dismemberment of the Western Roman Empire. After 376 there was a group of barbarians living as an independent group inside Roman territory. I am not a expert, and accept his thesis; but somewhere in the back of my mind I am not sure. The Hunns did not invade Gothic territory in mass, and took their time in finally getting there. The Goths were not pushed across the river, and were quite familiar with being settled in Roman territory. Other groups had been settled in Roman territory before 376. It is more like the Romans could no longer resist emigration across the Rhine and Danube, for some, or many reasons. In any case this is a great book, and anyone who is interested in the history of this period, should read it along with his other books.

Published by Thriftbooks.com User , 14 years ago
the Goths before the roman empire became the major european power were a really loose small group of families and tribes.The early archaeological evidence from this book shows that they were already metallurgists of some standing in the BC era and had already gone well down the path from subsistence farming to settled towns and farming.The area of present north Poland seems to be where they were when they were recognized as a group but where they originated the author never says because it can't be said for sure although there may have been a number of prehistoric european cultures that were Gothic ancestors.The real "Gothic people" really come about out of necessity because of the steamroller force of the Roman Empire.The Goths became a competitor of Rome and were able to form alliances with other Celtic? or germanic tribes.The image I'd always had of the Goths is a savage fur skinned muscular gothic war chief being met at the gates of rome by a humble bishop who pleads with the pagan not to sack Rome.Then somehow God works a miracle and the Goths pack up and leave.If this was your image of the Goths then you need to read this book,because you will see it is completely inaccurate.the goths in fact were no more warlike than the Romans and would not want to sack rome anymore than some of rome's own Generals and politicians (who probably sacked Rome more times than the Goths anyway)!!Being farmers and artisans the Goths movement into Italy was more a political move out of necessity since the Roman Empire controlled most of the the economic resources of Europe at the time.While the romans disliked the Goths eventually they formed alliances with them according to Heather seeing the goths as "the lesser of the evils" in regard to the numerous european ethnic group vying for power and influence.The ostrogtoths and visigoths are considered "supertribes" that absorbed alot of smaller groups,both Germanic and non Germanic.the Goths played the Roman game of "divide and conquer" well and at times formed alliances with Rome as well as with Rome's enemies,showing themselves as asute as the Romans themselves.there is a good explanation of the rule over Italy of the gothic king Theodoric,who was prominent after the breakup of the Roman empire into east-west around 500AD.Since Theoderic was an Arian christian(non-trinitarian) his role in history was downplayed since most of the histories from this period were written by trinitarian Catholic writers sanctioned by the Roman Catholic church.Eventually the Goths try to outRoman the Romans thenselves in taste,architecture,manners,law and learning.Theoderics famous quote in regard to this phenomena one for the ages,"The poor Roman imitates the Goth,the Rich Goth imitates the Romans."

Published by Thriftbooks.com User , 14 years ago
The seeds of what was later to be "Western Civilization" were sown in the tumultous period spanning the decline and dissapearance of the Western portion of the Roman Empire and emergence of the Merovingian kingdom. The Goths, a Germanic people thought to originate from Scandinavia/Poland played a central role in European history, both as generals and troops in the imperial army, and as important players leading to eventual formation of two independent kingdoms, that of the Ostrogoths in Italy and Visigoths in southern France and Spain. Heather, a lecturer in medieval history at the University College of London, traces the political history of Gothic migrations with an emphasis on Roman-Gothic interactions for which there is a lot of written evidence from Roman historians Procopius, Boethius and Cassiodorus. Rome was a great attraction for the Goths, as a trading partner, military employer - and prey. H. is at his best describing intrigues between different ethnic factions and the rationale guiding military campaigns. I especially liked his descriptions of how Goths incorporated the ius civilum and ius gentium (Roman rule of law) and taxation and how Theodoric managed to coopt the Gallo-Roman landowner elites into the Gothic military. This essentially providing a natural continuation of the Western Roman Empire; in Spain, there was eventually a complete merger between Visigothic and Hispano-Roman populations. As mentioned in other reviews, the book is focused on political events - strategic alliances, dynastic succession wars, relationship to Rome, discords between gothic factions at the expense of in depth analysis of gothic religion, beliefs, lifestyle or even military strategy. Heather successfully highlights the acumen Goths needed to balance the expansionist tendencies of neighboring Franks, Burgundians, Heruli, Gepids, Huns etc, not to mention the constant tension generated by Byzantine meddling and scheming. A separate couple of chapters are rightfully devoted to Theodoric, probably one of the greatest strategic geniuses of the early Middle Ages. Although he tried hard, Theodoric had no heirs and, eventually, intergothic rivalries coupled with Byzantine machinations (notably, the campaign by Belisarius, one the best generals in B. history. Eventually, the Ostrogothic kingdom fragmented and fell, unable to match heavy calvary of Clovis' Franks. Although Goths dissapeared as an organized force by the mid-7th century, their presence can be seen in the blond beauties depicted in rennaissance portraits, and in the looks of many Northern Italians and Spaniards today. This is a well-written and readable expose, one of the best sources on Goths available to the lay reader.

Ian Myles Slater on: A Modern Look at "The Barbarians"

Published by Thriftbooks.com User , 18 years ago
This entire book is not all that much longer than the notes, bibliography, and index of the roughly contemporary translation of Herwig Wolfram's "History of the Goths," which should tell you immediately that the approach is rather different. Both are worth the serious student's time, but as part of the Peoples of Europe series "The Goths" is clearly intended to serve as an introduction to the main events, persons, and problems.Peter Heather's view of the emergence, actions, divisions, and fates of the people (or groups) identified in Greek and Latin texts as Goths, Ostrogoths, and Visigoths is modern and sophisticated, but a lot less ponderous and a lot more conclusive than Wolfram's sifting of the evidence. He frequently disagrees with Wolfram (for reasons which can sometimes be traced in Wolfram's extended discussions and notes), but Heather reaches reasonable conclusions at each stage. He proceeds to build on them, to a limited extent, while trying to keep speculation firmly under control.This attempt to stay true to available data tends to limit what is covered. At the turn of the century, a limited amount of archeology and a lot of data gathered from later Germanic peoples were thrown together to produce detailed descriptions of the supposed daily lives and customs of the Goths. Instead of these interesting descriptions, we find only the most careful use of archeological and comparative data to flesh out the meager record. This is not as satisfying, but a lot more trustworthy.What once were accepted conclusions about how the Goths behaved and governed in Gaul, Spain, and Italy also have been called into question. Instead, we are left with questions of how they exploited the territories they occupied, and who was doing the administering. Heather makes some reasonable suggestions, but avoids getting more specific than the evidence will warrant. The result is heavily weighted to military and political events, which were what contemporary reports mainly described.
Copyright © 2020 Thriftbooks.com Terms of Use | Privacy Policy | Do Not Sell My Personal Information | Accessibility Statement
ThriftBooks® and the ThriftBooks® logo are registered trademarks of Thrift Books Global, LLC