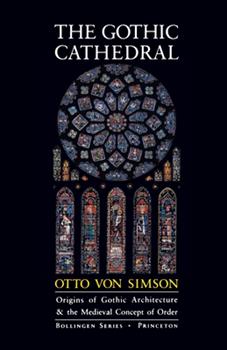 The Gothic Cathedral: Origins of Gothic Architecture and the Medieval Concept of Order - Expanded Edition

The description for this book, The Gothic Cathedral: Origins of Gothic Architecture and the Medieval Concept of Order, will be forthcoming.

Published by Thriftbooks.com User , 15 years ago
An interesting theme is the connection with mathematics. "With few exceptions, the Gothic builders have been tight-lipped about the symbolic significance of their projects, but they are unanimous in paying tribute to geometry as the basis of their art. ... With but a single basic dimension given, the Gothic architect developed all other magnitudes of his ground plan and elevation by strictly geometrical means, using as modules certain regular polygons, above all the square. ... Proportions thus obtained the master considers to be 'according to true measure'. ... Why this extraordinary submission, so alien to our own notions concerning the nature of art and of the freedom of artistic creation, to the laws of geometry? ... The Gothic artist would have overthrown the rule of geometry, had he considered it, as most modern artists would, a fetter. It is clear, on the other hand, that he did not use his geometrical canons for purely aesthetic reasons either, since he applied them where they are invisible to the observer. ... In the first book of his treatise De musica, St. Augustine defines music as the 'science of good modulation'. ... The science of good modulation is concerned with the relating of several musical units according to a module, a measure, in such a way that the relation can be expressed in simple arithmetical ratios. The most admirable ratio, according to Augustine, is that of equality or symmetry, the ratio 1:1, since here the union or consonance between the two parts is most intimate. Next in rank are the ratios 1:2, 2:3, 3:4 ... Augustine uses architecture, as he does music, to show that number, as apparent in the simpler proportions that are based on the 'perfect' ratios, is the source of all aesthetic perfection. ... For him, music and architecture are sisters, since both are children of number; they have equal dignity, inasmuch as architecture mirrors eternal harmony, as music echoes it. ... The Cathedral of Sens is the first Gothic cathedral. ... [T]he ground plan of Sens being designed ad quadratum, the square bays of the nave are twice as wide as those of the side aisles; owing to the tripartite elevation, it was possible to give the same proportion to the relative heights of nave and aisles. The elevation of the nave to the springing of the vaults, moreover, is subdivided, at the level of the arcade imposts, into two equal parts: the octave ratio of 1:2 permeates the entire edifice. ... Fortunately, at least one literary document survives that explains the use of geometry in Gothic architecture: the minutes of the architectural conferences held during 1391 and the following years in Milan. ... The question debated at Milan is not whether the cathedral is to be built according to a geometrical formula, but merely whether the figure to be used is to be the square ... or the equilateral triangle. ... The minutes of one particularly stormy session relate an angry dispute between the French expert, Jean Mignot, and the Italians. O

Published by Thriftbooks.com User , 16 years ago
There aren't many books available looking at the phenomenon or idea of the Gothic Cathedral as a whole, and few of those are generally accessible reading. There are countless books on particular cathedrals and churches - Notre Dame, Salisbury Cathedral, Chartes, the Abbey of St. Denis. There are other books that look at particular aspects of the architecture or function; particular books on flying buttresses, stained-glass windows, and such are also numerous. This third edition of Otto von Simon's book (originally published in 1956, updated in 1962 and again in 1987) looks at the Gothic Cathedral as a whole from many different standpoints - architecture, artistic value, spiritual value, economic value and influence, functional and practical concerns. 'The cathedral,' Simson wrote in his first preface, 'was designed as an image, and was meant to be understood as one.' Simson is direct in his admiration of Gothic style, calling Gothic architecture 'perhaps the most creative achievement in the history of Western architecture'. It is indeed hard to find rivals to this claim. The Gothic Cathedral, according to Simson, is the earthly representation of supernatural reality. It is a physical manifestation of the theological ideas and aspirations of the Middle Ages. However, Gothic has become a bit too commonplace in some respects - being at the centre of many European and North American cities and towns, it also suffers from being seen as a relic more appropriately the object of archaeological examination than current appreciation. Simson highlights many of the aspects of Gothic architecture, including the use of light in new, unparalleled ways, and the relationship between structure and appearance. Stained glass windows, according to Simson, 'are structurally and aesthetically not openings in the wall to admit light, but transparent walls.' Gothic also took advantage of advances in design and building materials to emphasise verticality beyond what earlier architectural forms could do. This together with the sense of geometric precision and orderliness made the Gothic church a reflection of heaven. Simson develops Augustine's idea of architecture and music as enjoyments of transcendence, 'since both are children of number; they have equal dignity, inasmuch as architecture mirrors eternal harmony, as music echoes it.' In addition to talking about the aesthetic principles of Gothic style, Simson develops the political and social history out of which it emerged. He gives an extended biography of Abbot Suger of St. Denis, in most regards the father of the Gothic style. Simson shows the competing ideas political and religious in the world, as well as the different influences and forces at work on Suger. 'Suger undertook the rebuilding of his church in order to implement his master plan in the sphere of politics. His vision as a stateman imposed itself upon the architectural project; he conceived it as the monumental expression of that v

The contextual foundations of Gothic Architecture

Published by Thriftbooks.com User , 22 years ago
As an art historian, museum curator, and traveler to France I found this book very useful. Most books on Gothic Architecture look at style as though it exists for its own sake. Simson places the beginnings of Gothic Architecture into the intellectual and historical context that gave this archetectual style its birth. The two sections that I most enjoyed were the theology of light that Suger was trying to express through architecture and the historical/political life of Suger. Both of these elements had a profound effect on the developement and impact of the Abby Church of St. Denis. This book represents architectural history as it should be written. Simson's approach is only possible because of his ability to draw upon a broad and deep educational framework. Reading this book caused me to lament the shallowness of much of what passes for scholarly training and writing in our time. You don' t have to be an architectural historian to enjoy this book. But you should be passionate about ideas. Simson shows us how ideas have consequences. This is one of the best books I have ever read.
Trustpilot
Copyright © 2022 Thriftbooks.com Terms of Use | Privacy Policy | Do Not Sell My Personal Information | Accessibility Statement
ThriftBooks® and the ThriftBooks® logo are registered trademarks of Thrift Books Global, LLC