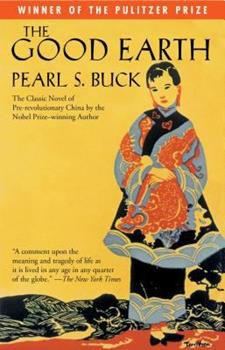 (Book #1 in the House of Earth Series)

Nobel Laureate Pearl S. Buck's epic Pulitzer Prize-winning novel and Oprah Book Club selection about a vanished China and one family's shifting fortunes. Though more than seventy years have passed since this remarkable novel won the Pulitzer Prize, it has retained its popularity and become one of the great modern classics. In The Good Earth Pearl S. Buck paints an indelible portrait of China in the 1920s, when the last emperor reigned and the vast...

What An Enjoyable Find!

Published by Nancy , 5 months ago
I can't believe I've never read "The Good Earth" before. To an extent, I knew about the old and new Chinese cultures, but this book really shows that. I also read the two other books in the trilogy -- "Sons" and "A House Divided". All three books are now part of my library. Worth reading!

Published by D. Contreras , 2 years ago
The Good Earth is one of my favorite movies. If you love the movie starring Paul Muni and Luise Rainer, don’t read the book. I was extremely disappointed.

Published by Thriftbooks.com User , 18 years ago
This 1932 Pulitzer Prize winning novel is still a standout today. Deceptive in its simplicity, it is a story built around a flawed human being and a teetering socio-economic system, as well as one that is layered with profound themes. The cadence of the author's writing is also of note, as it rhythmically lends itself to the telling of the story, giving it a very distinct voice. No doubt the author's writing style was influenced by her own immersion in Chinese culture, as she grew up and lived in China, the daughter of missionaries. This is the story of the cyclical nature of life, of the passions and desires that motivate a human being, of good and evil, and of the desire to survive and thrive against great odds. It begins with the story of an illiterate, poor, peasant farmer, Wang Lung, who ventures from the rural countryside and goes to town to the great house of Hwang to obtain a bride from those among the rank of slave. There, he is given the slave O-lan as his bride. Selfless, hardworking, and a bearer of sons, the plain-faced O-lan supports Wang Lung's veneration of the land and his desire to acquire more land. She stays with him through thick and thin, through famine and very lean times, working alongside him on the land, making great sacrifices, and raising his children. As a family, they weather the tumultuousness of pre-revolutionary China in the 1920s, only to find themselves the recipient of riches beyond their dreams. At the first opportunity, they buy land from the great house of Hwang, whose expenses appear to be exceeding their income. With the passing of time, Wang Lung buys more and more land from the house of Hwang, until he owns it all, as his veneration of the land is always paramount. With O-lan at this side, his family continues to prosper. His life becomes more complicated, however, the richer he gets. Wang Lung then commits a life-changing act that pierces O-lan's heart in the most profoundly heartbreaking way. As the years pass, his sons become educated and literate, and the family continues to prosper. With the great house of Hwang on the skids, an opportunity to buy their house, the very same house from where he had fetched O-lan many years ago, becomes available. Pressed upon to buy that house by his sons, who do not share Wang Lung's veneration for the land and rural life, he buys the house. The country mice now have become city mice. This is a potent story, brimming with irony, yet simply told against a framework of mounting social change. It is a story that stands as a parable in many ways and is one that certainly should be read. It illustrates the timeless dichotomy between the young and the old, the old and the new, and the rich and the poor. It is no wonder that this beautifully written book won a Pulitzer Prize and is considered a classic masterpiece. Bravo!

Wonderful book, but a lure to "impractical" studies

Published by Thriftbooks.com User , 23 years ago
I first read this book when I was about 14 years old, loved it, and went on in high school to read every Pearl Buck novel I could get my hands on. However, I want to warn potential young readers that too many Pearl Buck novels read at an impressionable age can lead one to major in an "impractical" subject in college, like Chinese Literature, rather than a more lucrative field like computer programming or engineering! :) This advice comes from someone with a 1987 B.A. in East Asian Studies--a wonderful, fascinating discipline, but not the one I have stayed in to earn a living. Still, my life is richer for having encountered the works of Lu Xun (short stories, which I read in the originals) and Dai Hou Ying (Stones of the Wall, which I read in the translation by F. Wood), etc., works which I would recommend to readers who enjoy Pearl Buck novels.

Published by Thriftbooks.com User , 23 years ago
The Good Earth, is about Wang Lung's plights with the earth. Many other things occupy Wangs life, but the earth is his main concern. He works the land as his father did before him. When famine strikes Wang Lungs land, he and his family are forced to go south for the winter. They have to work hard and beg all winter, and if they had not been so lucky as to be at the city when a revolution was occurring, which enabled them to loot the rich mans house, they might still be very poor. His new found riches gave him the ability to buy for himself a concubine from a teahouse in town. This started Wang Lungs Downward spiral. I thought this book was very good. It was like a window into the Chinese culture. My favorite part of the book was when Wang-Lung says to the old teacher in regard to his boys that he is sending to school, "So if you would like to please me, beat them." I also think that The Good Earth is indispensable to any person that fancies himself well read. I think that because of what I said previously about it being a window to the Chinese culture.

The Good Earth Mentions in Our Blog 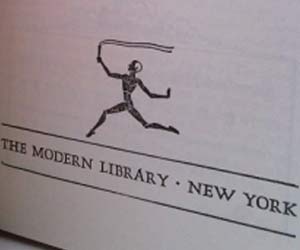 ThriftBooks Collectibles are special items that are rare, vintage, signed, or otherwise remarkable. This week the Collectibles team wants to highlight a wonderful book publisher imprint called Modern Library. Learn more about the history of "The Modern Library of the World's Best Books" by reading more, and maybe you'll find a new treasure while you're at it.