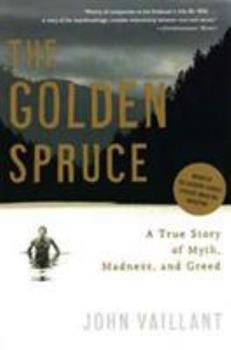 The Golden Spruce: A True Story of Myth, Madness, and Greed

When a shattered kayak and camping gear are found on an uninhabited island in the Pacific Northwest, they reignite a mystery surrounding a shocking act of protest. Five months earlier, logger-turned-activist Grant Hadwin had plunged naked into a river in British Columbia's Queen Charlotte Islands, towing a chainsaw. When his night's work was done, a unique Sitka spruce, 165 feet tall and covered with luminous golden needles, teetered on its stump...

Published by Thriftbooks.com User , 16 years ago
This is an incredibly well written book and I loved it. I have to say that I wish they (publicist or who ever) had not compared John Vaillant to Jon Krakauer because aside from the subjects being something they both would be interested in, they are not comparable in their writing styles and I think it does Vaillant an injustice not to let him stand on his own. I think that if you like Krakauer you might be let down by Vaillant simply because they have different writing styles. John Vaillant is more of a historian; his book is very detailed and technical; whereas Krakauer's writing is much more haunting and emotional and pulls you in the way a novel does. Also, when you buy this book keep in mind that Vaillant goes into a lot of history of the logging industry, the Golden Spruce, and the Haida as well as the story of Grant Hadwin. If you are interested in all of those things you will enjoy this book immensely. On another note, if environmentalists could articulate their cause the way that Vaillant has, more people would be interested and sympathetic to their cause; this book definitely opened my eyes. Although this book is not a novel, it is definitely a tragedy on many fronts; the Greeks would applaud.

An Incredible Story by a Terrific Writer

Published by Thriftbooks.com User , 16 years ago
The amazing and surprisingly gripping tale of the Golden Spruce is one of the best books I've ever read. From the seed of a story about a magnificent and mysterious tree, in a way not unlike the Golden Spruce itself, John Vaillant's story grows into something much more than an interesting and informative book. To help the reader fully understand the strange sequence of events, Vaillant's book is loaded with historical and factual detail, interwoven into a compelling and vital narrative. Rarely have I learned so much about things around me that have a direct impact on my life while fully enjoying the entire process. The result is a fascinating and truly important book. And the best investment of my reading time in many, many years.

Published by Thriftbooks.com User , 16 years ago
I'm always up for a book on adventure, whether it's Redmond O'Hanlon lost in a jungle or climbers gasping for breath as "Into Thin Air." Having an interest in animals and nature as well, I might be inclined to read "The Geese Of Beaver Bog" (which I loved). So, it was in this vein that I was drawn to this book. However, what has surprised me greatly is that it has become a sort of segway to some other books that I have wanted to read, but, have so far avoided. "Collapse" being one and the other being "A Short History of Progress." In a way, this book has a bit of the same message, it seems. John Vaillant has managed to elegantly weave the hard-edged history of man surviving and pillaging the resources of the Pacific Northwest with science, mythos, and modern ethical dilemmas. We learn, as others have pointed out, about the history of loggers, a bit on otter hunting, the Indigenous cultures, the lore and science of trees and forestry, the origins of Greenpeace, and the fine edge of reason and madness that rarely balance themselves in the quest for power and riches. I love the personal explorations of madness as it taunts the rope and drags you to the final question, which is "will we survive our own disengagement with reality?" In the end, one hopes that the people of the Queen Charlotte Islands will catch themselves in time and not go the way of Easter Island. As we explore the broken hearts of the Pacific Northwest, let us explore our own collective broken heart and divine how we might heal those wounds.

Published by Thriftbooks.com User , 16 years ago
The most obvious comparison to Vaillant's work is that of Jon Kraukauer. Both have chronicled superhumans in the wild, putting their main characters within the scientific, evironmental, and political context of the day. This is a book about so many things--the natural history of British Columbia and the offshore islands, the heritage of the Haida and other island British Columbian tribes, the lives of the courageous men who felled trees for logging companies in the 1900's, and the life of logger-turned-activist Grant Hadwin, who felled a magnificent and one-of-a-kind-tree. Vaillant weaves a compelling tale of the formation of the islands and the native tribes, who first gained wealth trading sea otter pellets with the Europeans. When that business dried up, there were tough times until the logging business picked up. One tree, the Golden Spruce of myth and legend, was spared by the logging conglomerates as a publicity stunt, until Hadwin came along. Vaillant sets up the story well, priming the reader with history and science until Hadwin comes into the picture. I only have two criticisms of the book. (1) Hadwin is kind of "snuck in" to the story. Vaillant speaks of Hadwin's uncle Angus and then brings Hadwin in without introducing him as the man the Golden Spruce story is about. Unless the reader read the inner jacket, they have no idea why they are reading about this Hadwin (or Angus) character for so long. (2) There are no pictures of the mythical Golden Spruce, other than the cover shot, which looks to be altered so that it stands out more than the other green trees. I'm not even sure if the cover shot is genuine or an artist's rendition. The description of the Golden Spruce once felled is amazing, and I was dismayed that they didn't include a picture of it after it was felled. I learned a lot about the history of the logging industry and the super-men who work felling trees. This is not a job for ordinary men. I also learned about the necessity of participating in "evil" trades. On p. 49 Vaillant states [of the sea otter pellet trade], "the natives were hostages, first and foremost, of the trade itself: once the market for skins had been created, they really had no choice but to participate. Any village or tribe that didn't would become losers in the inevitable race for new arms, technology, and wealth. Once aboard a juggernaut like this, it appears suicidal to jump off--even if staying on is sure to destroy you in the end." In modern days, the Haida tribal natives found them caught in the search for jobs--the only two available were fisherman or logger. [p. 115] "Many Haida find themselves in a strangely familiar double bind: aid and abet the plundering of their historic homeland, or get left behind." This is an excellent book that will teach you a lot about science, history, politics, the business of logging, and activism. Any non-fiction lover will appreciate the tale that Vaillant has woven. As a bonus, his prose

Published by Thriftbooks.com User , 17 years ago
John Vaillant conjures the mystery of the Pacific Northwest coast where hundred-foot waves wash fish into the limbs of trees and diving birds fly underwater, a land where the Haida people collaborate in their own near destruction through exploitation of the otter trade, a place where an indestructible and brilliant logger becomes a zealous, misguided environmentalist. The rainforest is a place of myth and transformation. If you dare to enter, you will be changed. And if you enter the world of this magical book, where trees grow 300 feet tall and live 500 years, you will be transfigured by what you know. John Vaillant has exposed a compelling story, a murder mystery where the victim is a rare spruce with brilliant golden needles. Without sentimentality, with complete reverence for the tree as a tree, Vaillant illuminates the terrible loss, and the deeper loss it represents: the desecration of old growth forests. Mr. Vaillant has done his research and rendered his tale with suspense and energy, with great beauty, in a language that approaches poetry.
Trustpilot
Copyright © 2022 Thriftbooks.com Terms of Use | Privacy Policy | Do Not Sell My Personal Information | Accessibility Statement
ThriftBooks® and the ThriftBooks® logo are registered trademarks of Thrift Books Global, LLC