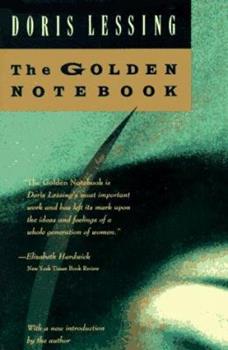 The Golden Notebook is Doris Lessing's most important work and has left its mark upon the ideas and feelings of a whole generation of women. -- New York Times Book ReviewAnna is a writer, author of... This description may be from another edition of this product.

Published by Thriftbooks.com User , 14 years ago
The Golden Notebook (1962) was Doris Lessing's most complex work. It is generally hailed as a pioneering novel on male-female relationships and places her among the great writers of novels. It uses overlapping stories, each slightly similar to the prior, starting with a fictional writer Anna Wulf, her story, and the stories she writes. Doris Lessing (1919 - ) is the 2007 Nobel Prize winner in literature. She has a score of novels and many other works. The three novels including The Golden Notebook (1957), her first novel The Grass is Singing (1950), and The Summer Before The Dark (1973) are considered to be her representative works. I read those three. In many ways the novel is incoherent, and it takes some patience to read all 634 pages. I had to take one break after page 200. It was all a bit too intense. She uses a complex narrative technique to outline three or four different main stories featuring different sets of characters. Some characters or similar characters appear in many pieces, i.e.: a character Ellen in one story is similar to Anna in another. There must be at least 100 stories, some very short. The central protagonist is a writer, Anna Wulf, and she draws on five notebooks for her story about Africa, politics and the communist party, her relationship to men and sex, The chaotic and disjointed form of the novel is supposed to reflect Anna's mind. As pointed out by other critics, there is no "single perspective from which to capture the entirety of her life experience." As I post this review, I have read three of Lessing's novels from three different time periods in her career and have taken out another four from a library which I am in the process of reading. This is her main work - of her 30 or 40 longer works - and it contains the strong feminine perspectives, dialogues, analysis, and commentary that is associated with Lessing. One could say that these are the trademark writing styles of Lessing. I bought this novel and it has an excellent introduction by Lessing. Having read The Grass is Singing (1950), her very first novel, I found that the present novel is far more complex. The Golden Notebook is a series of stories within a story and it is 600 pages long. I liked the book and would recommend it. It is not a simple read. It took me a week to read it and I could not read it in one go. The Summer Before the Dark is a much easier read and can be read in an evening or so and contains some similar ideas. But to get a full appreciation of Lessing, one must read the present novel. I have never read anything similar, and the novel must place Lessing among the geat writers of novels.

Published by Thriftbooks.com User , 15 years ago
This was my first Lessing fiction and it's a true inspiration. The notebooks and short story are well-paced well retaining consistent stylistics of the writer 'Anna'. I particularly enjoy the short story and the yellow notebook, which imitates the short story. Lessing writes with such honesty it forces you to read with honesty as well while reflecting on similar situations in your own life. This book reminds me of a few short stories/novellas by Marguerite Duras - a delightful connection. I recommend reading Lessing's introduction before attacking the novel itself. It is insightful and intelligent, pushing you to ask questions heuristically. Also, I recommend trying to finish the novel between 1-2 weeks to keep the momentum and intensity of the notebooks.

All the Amazing Notes

Published by Thriftbooks.com User , 21 years ago
The Golden Notebook is Lessing's most well known of her works and with good reason. It is an incredibly complex and layered work that addresses such ideas as authorship of one's life, the political climate of the 60s and the power relation between the sexes. It would be naïve to consider this novel as just a feminist polemic. I know many people have read it only this way or not read it because they assume it is only this. Lessing articulates this point well in her introduction. The novel inhabits many worlds of thought. It just so happens that at the time of its publication it was a very poignant work for feminism. More than any book I know it has the deepest and longest meditation on what it means to split your identity into categories because you can not conceive of yourself as whole in the present climate of society and in viewing your own interactions with people. This obsession with constructing a comprehensive sense of identity leads to an infinite fictionalisation of the protagonist's life. Consider the following passage "I looked at her, and thought: That's my child, my flesh and blood. But I couldn't feel it. She said again: `Play, mummy.' I moved wooden bricks for a house, but like a machine. Making myself perform every movement. I could see myself sitting on the floor, the picture of a `young mother playing with her little girl.' Like a film shot, or a photograph." She can't attach her own vision of herself to the reality of her life. The two are separated by the ideologies of society which influence her own vision of who she should be.This novel also captures the political climate of the era, a state of post-war disillusionment with the available models political ideology. They recognise the need for some kind of change, but are unable to envision a model that will work. Opinion is split into infinite personal categories of what government should become. Unfortunately, for all these good things which this novel intelligently discusses, it also has its own shortcomings that the reader should be aware of. Its representation of homosexuality is very limited. It has the unfortunate tendency to envision homosexuality as an idea of being rather than an actual state of being. No doubt, this was influenced at the time it was written by the meaning of being `a gay' as being strongly attached to one's political position. The state of being a homosexual is inextricably attached to the misogynist vision of what femininity should be when it is actually something a bit more complex than that. Though Lessing is able to see through many misconceptions of her era such as the hypocritical actions of people who claimed to be fighting against racism while reinforcing racial divisions, the novel falls a bit short in other areas. Nevertheless, this doesn't prevent it from being a very powerful and enjoyable novel to read.

Read this book. Let it change you.

Published by Thriftbooks.com User , 22 years ago
Future generations will call this the most important novel of the 20th century, or at least they should, for this is the book that expresses the major themes of the world in that century. What we now call gender issues (now there's a broad label!) occupy a major portion of the novel, but it is just as much a picture of the Fear of humanity during the Cold War times, when every day we were 30 minutes from doomsday. It is about racism and colonialism and the fading of empire; it is about the breakdown of society in the technological age; it is about single mothers; it is about mental states and breakdowns. It is about Communism, and have we not heard the 20th century called the Age of Communism? All this is not what makes this a great novel. Each time I've reread it, the more it seemed I could almost put my finger on something-a question of identity, or what it means to be human. "Breakdown" is a word appearing throughout the novel-by the end, it almost seems to mean "break through": break through the rhetoric, break through the categories. The Golden Notebook speaks to deep emotions-something there is that needs to shine through, to grow, to love and to be loved. This novel reached down to that. It is sometimes painful, sometimes provoking a fear/hate reaction, or a feeling of dislocation. This is the kind of book that you often have to slap down on the table, pace the room, and work off the tension that has built. Doris Lessing wrote once that she considered this novel something of a failure, for it only names the issues, exploring briefly, but not solving. I can see what she means-this is a novel that forces the reader to wrestle with themselves as much as the characters. This is why some people read the novel and yawn, and why some read the novel and are profoundly changed. One must be at a crossroads, unsettled. Read this book. Let it change you.

Anna Wulf is my anti-heroine!

Published by Thriftbooks.com User , 24 years ago
The Golden Notebook is brilliant. Lessing does an amazing job of holding many strands together. Apparently she wrote it exactly as is published--page after page rather than completing the "notebooks" and short novel separately and spliting them into final form later. I must admit that one notebook did give me a bit of grief until I caught on to Lessing's plan, but it was well worth it--especially for the last 80 pages or so.The author decries the labelling of her book as being about the "sexual war" between men and women. I agree. Far more is contained here. Lessing addresses everything: the political, the social, the personal, sanity, insanity, truth, the sexual, the notion of accepting any experience for the sake of just that--experience. And of trying to keep oneself "whole" when fragmenting is the only protection against the pain of living. But how can one justify avoiding the pain of life when she subscribes to "experience of all" as self-education? Maybe the answer is the meaning of life.
Trustpilot
Copyright © 2022 Thriftbooks.com Terms of Use | Privacy Policy | Do Not Sell or Share My Personal Information | Accessibility Statement
ThriftBooks® and the ThriftBooks® logo are registered trademarks of Thrift Books Global, LLC