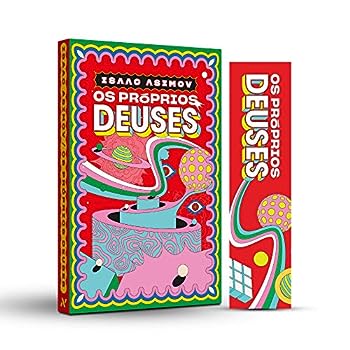 In the twenty-second century Earth obtains limitless, free energy from a source science little understands: an exchange between Earth and a parallel universe, using a process devised by the aliens.... This description may be from another edition of this product.

Published by Gabriel L Delatorre , 3 years ago
the book was good and captivating. it confused me a bit but im a little slow. Great book

A classic masterwork created by an acknowledged master!

Published by Thriftbooks.com User , 16 years ago
To elevate a work of science fiction from mere novel to literary masterwork is an achievement to which few authors can lay claim. Asimov is one of those authors and "The Gods Themselves" is one of those rare classics. Asimov has expertly blended visionary and imaginative yet credible hard science with a softer side of science fiction that includes an exciting story line, both human and alien characters that are so much more than cardboard cut-outs and a thoughtful exploration of the world in which he has placed his story. Those who prefer their sci-fi hard will marvel at Asimov's prescient cosmological vision of communication and transportation of matter between parallel universes. This communication, a source of unlimited non-polluting energy,also causes a slow leakage of the fundamental characteristics of the joined universes resulting in a reduction of the magnitude of the strong nuclear force in our universe. A few scientists have determined that as this effect accumulates, the sun will become a super nova and our little galactic corner of the universe will explode into a quasar. (There goes the neighbourhood!). On the softer flip side of this particular sci-fi coin, Asimov has actually created three quite distinct short stories that combine to create an exhilarating unified whole. In the first we witness the purely serendipitous discovery of the portal between universes and we gasp as research into the potential harmful effects of the inter-universe communication is systematically suppressed by purely political and ego considerations. In the second story, Asimov takes us on a brief tour of the other side of that portal creating alien beings that are manifested in three distinct parts - rational, parental and emotional - and feed on pure energy. Asimov's rather imaginative exploration of their sexuality is exciting and evocative without losing sensitivity. In the final story of the three, Asimov takes us to a manned lunar station. The science issues are resolved satisfactorily in a setting that also includes a brilliant, probing exploration of the likely psychology of permanent human settlement away from earth in a physically, hostile alien environment such as the moon. An added bonus - a warm, fuzzy ending that cannot fail to bring a smile to any reader. If you're a lover of science fiction, your library remains incomplete unless you've added a copy of "The Gods Themselves"! Paul Weiss

Science and Sex Do Mix

Published by Thriftbooks.com User , 18 years ago
The good doctor, over his lifetime, wrote more books than many people read in their lifetimes. Many were excellent explanations of various aspects of science written in language that a layman could understand. Some were good analyses of literature, such as Shakespeare and the Bible. But it is his science fiction works, from his vision of a Foundation to Robots imbued with Three Laws, that guarantee him a place in the hearts of fans of the genre, and a fame that spreads well beyond its boundaries. This book was something of a departure for him, not being related to any of his other SF works, but still shows his sure hand at plotting and his deft melding of real science with a literally out-of-this-world idea. The story is told in three completely different segments, related only by the commonality of the scientific idea that drives this book, the Electron Pump, a device that can, apparently, deliver infinite free energy by trading material with a universe that operates on slightly different physical laws than our own. The first segment is a beautiful glimpse into the sometimes not-so-nice world of the academic researcher, into who gets credit (not necessarily the deserving one) for an idea, how animosities begin and are nurtured, about the crassness of public policy being determined by those who do not and cannot understand the basics of the science that delivers the technological goodies. The second segment is the part that makes this book deserving of its Hugo Award. Shifting from our universe to the para-universe that initiated the transfer that began the Electron Pump, Asimov invents a truly alien race that is at once believable and violently different from our own. Here we meet Odeen, Tritt, and Dua, who each form one part of tri-sexed whole. Each of these beings becomes a real person, from Tritt, the stolid, stubborn parent, Odeen as the absent minded thinker, and most especially Dua as the feeling, capricious, different one. Part of what makes this section so seductive is that Asimov has not just stated that this was tri-sexed species, but shows just how such an arrangement could work, and then throws in something I don't think I saw elsewhere till some of Ursala K. LeGuin's stories - just what constitutes the no-no's, the 'dirty' aspects of their sex lives. And these aspects, when viewed in terms of the whole life cycle of this species, make sense! A truly remarkable achievement, and I wish he had written more about this remarkable universe and its inhabitants.The third section returns to our universe, and deals with how free investigation into reality guided by leaps of intuition can overcome even two separate hide-bound organizations, and naturally leads to the resolution of the problems introduced in the earlier sections. This section is not quite as strong as the other two, but does definitely develop one of Asimov's points: the characteristics of the universe we live in are determined by several seemingly random constants, from the

Published by Thriftbooks.com User , 20 years ago
It's been a while since I read any of Asimov's books - the Foundation series has always been one of my favorite science fiction series. Therefore, I decided to read another classic of Asimov (or at least, so I've been told). "The Gods Themselves" didn't surprise me, yet I was also surprised. Why? Well, the book was terrific, definitely one of Isaac Asimov's greatest novels. But also, I was surprised to see such an amazing description of a fascinating alien society - Asimov usually does not like to write about aliens (at least, that's the impression I've gotten from reading his books), but the "alien part" of the book was SO good, and so well conceived and written, it made me wish Asimov would've written more books in this style.What is the book about? The book contains 3 parts, each is actually a separate story which revolve around the same theme. The first part tells the story of Dr. Peter Lamont, a physicist, which recalls how the "Electric Pump", a device which enables receiving a near-infinite amount of energy as a result of matter transferral between our universe, and another universe which has different laws of nature. Lamont finds that this device might destroy our solar system, and this story depicts his attempt to stop the pump. I really liked this story. It's written in typical Asimov style: witty, humorous and totally brilliant.The second part tells the story of Odeen, Dua and Tritt - an alien "Triplet" (3 beings which are a family). These aliens live in the other universe and the story describes what happens on this side of the pump (as a result of the events from part one). As I mentioned before, this part was truly amazing. I wish Asimov had written more books about this world, as he created such a fascinating universe. You have to read it to see what I mean.The third and final part, tells the story of Denison, a scientist which also appeared in the first part, and as a result of events which occured there, moved to the moon. I found this part a bit boring. This part resolves the story lines from parts one and two.I wholeheartly recommend this book, if only for the second part. Asimov being a professor, this book is filled with real science in a way which integrates with the plot and supports it (contrary to "technobabble" use of science) - this is one of the reasons the book is so good. The only thing which bothered me a bit, is that the first and second parts aren't really resolved on their own, meaning, the story ends only after the third part is over. This disappointed me, because these really were the best parts of the book and I felt somewhat cheated that I could not see how the protagonists reacted to what happened in the end. Nevertheless, this only detracts a little from the book which is still a masterpiece.

Published by Thriftbooks.com User , 23 years ago
I have been a fan of Asimov's fiction as well as his science essays since childhood. I've read his Foundation novels, Robot novels, and various unrelated fiction and factual material. While most of his works have usually appealed to me, I can say with little reservation that "The Gods Themselves" is my favorite Asimov novel - and certainly earns a prominent spot in my personal "Top 10".One of the things I like about this novel is the way the Friedrich von Schiller quotation "Against stupidity, the [very] Gods themselves contend in vain" is worked into the story. The three phrases that make up this quote - "Against Stupidity...", "...The Gods Themselves...", and "...Contend In Vain?" are used as chapter titles - and, what's more, these titles are quite appropos to the theme of each chapter.One of the most enjoyable parts of the novel is the second chapter, which portrays a most unusual, and wholly believable and consistent alien race. Science fiction authors often struggle with the difficulty of portraying an alien race that is different enough from humans to be believable as aliens, yet similar enough to make their motives and culture graspable by a human reader. Asimov succeeds brilliantly in this task, something I can say for only a few other SF titles.At the risk of sounding PC, I was also pleased that Asimov introduced a strong female supporting character, something not usually found in most of his works. The "Selene" character introduced in the third chapter is reminescent of the strong female leads found in many Heinlien novels.Any fan of Asimov's works - or, for that matter, any fan of good science fiction should add this book to their essential collection. There is a good reason why this novel was awarded both the Hugo and Nebula awards after it's initial publication. Unlike many modern winners of these awards, "The Gods Themselves" is both a good AND entertaining story. It's clever and stylish enough to appeal to the "artsy" types that issue such awards, while being entertaining enough to appeal to the meat-and-potatoes reader.
Trustpilot
Copyright © 2022 Thriftbooks.com Terms of Use | Privacy Policy | Do Not Sell or Share My Personal Information | Accessibility Statement
ThriftBooks® and the ThriftBooks® logo are registered trademarks of Thrift Books Global, LLC