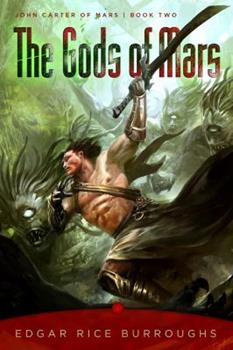 The Gods of Mars (John Carter of Mars)

(Book #2 in the Barsoom Series)

After his death-defying feats in "Princess of Mars," John Carter was forced to return to Earth--but 10 years later, he's finally sent back to the Red Planet. Carter dreams of reuniting with his beautiful wife Dejah Thoris, but first he must join his Martian ally Tars Tarkas to battle a wide array of enemies--including the deadly Pirates of Barsoom on their speeding aerial craft. Amidst all the thrilling swordplay and intrigue, Carter learns more about...

Be sure to read "A Princes of Mars" first

Published by Thriftbooks.com User , 11 years ago
We last left John suffocating and wondering if we will ever see him again (except for those few intrepid people that dare to read ahead) "Twelve years passed since I laid the body of my great-uncle, Captain John Carter, of Virginia, way form the sight of men in that strange mausoleum in the old Cemetery at Richmond." John returns to a Mars he never saw before yet soon finds old friends and new adventures. Not everything is black and white as in the Saturday morning cowboys. The story is a never-ending series of last minute escapes until the very end when, well read the book and find out. Once again, we get to kibitz. A Princess of Mars

Published by Thriftbooks.com User , 12 years ago
This classic tale of high adventure from Edgar Rice Burroughs was one of the books I cut my reading teeth on at a very early age and have read it several times over the past 55 or so years. Of the pulp fantasy writers of the time, Burroughs, in my opinion was one of the best. His writing introduced many concepts, techniques and plotting which are still used to this day. I must admit that I was quite leery of this particular work as it has been edited somewhat to make it more palatable to the young reader of today. The original was written in an almost Post Victorian style and to be honest, was difficult at times for young readers to connect with. I am normally very opposed to such changes, but it this case it actually works. Anything that can be done to introduce the younger generation to some fine story telling is worth the effort I suppose. Now this is not my cup of tea by any means as I absolutely delight in the original prose and feel it is one of the strengths of the story. The convoluted sentence structure is wonderful, but there again, unless you were raised with it, I can see where it would be a turn-off for many. This of course is the story of John Carter's return to Mars in search of "the incomparable" Dejah Thoris and hopefully save her again from "a fate worse than death." John Carter who is the "greatest swordsman on two planets" lands in the wrong place. He ends up in Mars Heaven, so to speak, which is far from that he soon learns. And the adventure begins. He is reunited with his friend the mighty Jeddak of Thark, the great green, four armed warrior and of course a plethora of bad guys and good guys. The action never stops and the sword play is never ending. Strange creatures abound and of course our hero overcomes all odds. This is wonderful, action packed fantasy at its best. And does John Carter, greatest swordsman of two planets find and save the love of his life? Well, no spoilers here, so you have to read it for yourself. All in all, despite the subtle changes, I have to give this one five stars. It is a great way to open up a whole new reading world to a new generation of readers. Don Blankenship The Ozarks [...]

Published by Thriftbooks.com User , 15 years ago
The Viking lander in the 70's proved there was no life on Mars. If you just forget that while reading this book you will enjoy it from beginning to end. Gods of Mars takes place ten years after the first John Carter Mars book, A Princess of Mars, but you really don't have to read it to enjoy this one. Another note, this there is a John Carter of Mars movie in the works due out some time in 2006-(7?). Check out this imdb link to learn more: http://www.imdb.com/title/tt0401729/

WORTH A SECOND GO!

Published by Thriftbooks.com User , 17 years ago
While digging through my large collection of books, I came across this one, along with the entire John Carter Series. I hate to admit to the fact that I first read these books over 45 years ago. I sat down and read them again. I was as delighted this time as I was when I was fifteen. This is fiction from an era we will not see again. This is the stuff little boys dream of! Read it, savor it and enjoy it! I cannot recommend this one high enough.

Published by Thriftbooks.com User , 23 years ago
This second installment in Burroughs' Martian series surprisingly outshines A Princess of Mars. Sporting even more action than the first novel, it makes good use of ideas made mention in Princess. Add to it a cliff-hanger ending even more "edgey" than before, and you've got one of Burroughs' best.
Copyright © 2020 Thriftbooks.com Terms of Use | Privacy Policy | Do Not Sell My Personal Information | Accessibility Statement
ThriftBooks® and the ThriftBooks® logo are registered trademarks of Thrift Books Global, LLC