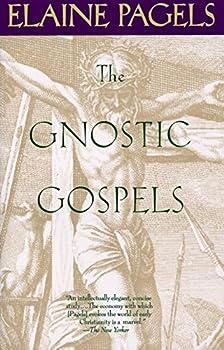 A provocative study of the gnostic gospels and the world of early Christianity as revealed through the Nag Hammadi texts. This description may be from another edition of this product.

A provocative, insightful look at the early Christian church

Published by Thriftbooks.com User , 18 years ago
Noted historian of the early church Elaine Pagels has produced a clear, cogent, and very effective introduction to the subject of Gnosticism, a different form of Christianity that was declared heretical and virtually stamped out by the orthodox church by the start of the second century after Christ. Most of what we knew of the Gnostic belief system came from the religious authors who worked so hard to destroy the movement, but that changed drastically with the still relatively recent discovery of a number of lost Gnostic writings near Nag Hammadi in Upper Egypt. Unlike the Dead Sea Scrolls, this momentous discovery of ancient papyri has received little attention, and I must admit I went into this book knowing virtually nothing about Gnosticism. As an historian by training and a Christian, the information in these "heretical" texts intrigue me, and I believe that Christians should challenge their faith by examining material that does not fall in line with accepted beliefs. I should note that Pagels does not attempt to summarize or examine in detail the Gnostic Gospels in and of themselves; her particular focus here is the way in which Gnosticism affected the rise of the orthodox church that declared the Gnostics heretics. Still, she presents a great deal of information on many of the newly discovered texts and inarguably shows that the Christian church was founded in a society espousing a number of contradictory viewpoints.Pagels does a good job of presenting the context in which the early Christians lived and eventually argued against one another. The debate was seemingly one over spiritual authority, and social and political issues played a part alongside purely religious disagreements between different factions. I think she tends to overemphasize the sociopolitical implications of Gnosticism, yet her arguments are certainly sensible and enlightening. One of the problems with Gnosticism as a movement was the disagreement among many so-called Gnostics on a number of issues. In terms of Gnosticism as a whole, however, one can point to a number of thoughts and ideas that ably represent the whole. Gnostics basically saw their faith as an internal thing, a practice based on the secret knowledge Jesus supposedly shared with a select number of individuals, one of whom was Mary Magdalene. Gnostics attracted women in particular because most Gnostics viewed everyone as equal and allowed for the participation of women in any sacred act. The orthodox, arguing that the disciples were men and thus the church held no leadership positions for women, opposed the teachings on these grounds. Gnostics basically believed that one found Christ in oneself; inner visions were the trademarks of true Gnostics. To the orthodox church founded on the basis of Peter's succession as the head of the church, Gnostics thus placed themselves not only on the same footing as the apostles but above even the Twelve. They tried to answer their own questions as to how Ch

Remains a popular introduction to the Gnostic Gospels.

Published by Thriftbooks.com User , 19 years ago
For almost two thousand years these so-called Gnostics have been silent allowing the polemics of their detractors to define our understanding of Gnosis (insight). These gnostic testaments give us an entirely different worldview to experience and a different teacher in Christ. It would be difficult to inflate their importance to students of early Christianity and Pagels does a terrific job of setting the stage for this important drama to unfold. In the end, I felt Pagels consistently struck the right balance with the aim being to elucidate and not to convert. My highest recommendation.

Published by Thriftbooks.com User , 20 years ago
.....by a Harvard educated luminary in the field. In "The Gnostic Gospels", Pagels explores the implications of the 1945 discovery of the Nag Hammadi, a collection of early Gnostic Christian texts dating back 1,500 years ago and reflecting original texts written as early as the first and second centuries. These texts have allowed scholars to learn how Gnostic Christians viewed God, Jesus Christ, the roles of women, orthodox Christianity and the formation of the Church. Pagels further analyzes the distinct differences between Gnosticism and orthodox Christianity and shows us how it came to be that the Gnostics were condemned as heretics and much of their writings destroyed. She then takes us through the victory of orthodox Christianity and the formation of the Church. Her writing is illuminating because it shows us the incredible social and political motivations behind routing out Gnosticism and forming a church with a powerful and distinct hierarchy and strict doctrine. What is additionally interesting is that we see the slow evolution of doctrine and the origins from which it stems. We come to see that Church doctrine did not always exist from the very beginning of the Church, that is was not always honestly motivated and that much was excluded from what the Church ultimately adopted as the New Testament. We see how the orthodox Christians came to view Jesus Christ as having been a real man who literally died and was resurrected. We also come to see and clearly understand the slow exclusion of women from positions of even the slightest power within the newly forming Church. Each of these developments are part of what distinguishes orthodox Christianity from Gnosticism. Pagels, as well, takes us through early Roman persecution of Christians.Those who are well read on the origins of Christianity will find Pagels unbiased approach to the Gnostic Gospels and the entire subject of early Christianity refreshing. Throughout, she quotes numerous texts based on the writings of early Christian leaders, both orthodox and Gnostic and guides us to a better understanding of the forces that shaped early Christianity. I highly recommend this book to anyone interested in the subjects of Gnosticism, early Christianity, and religion in general.

A Question of Religious Authority

Published by Thriftbooks.com User , 22 years ago
The book, The Gnostic Gospels, by Elaine Pagels presents an easy-reading historical document that reveals the fundamental and theoretical similarities and differences of gnostic and orthodox Christians of the early Christian movement. According to Pagels, the finding of the 52 Coptic texts at Nad Hammadi in 1945, has seemingly shifted our very thoughts about Christianity as a traditional religious movement. Interpretation of the gospels reveals that historically, various diverse forms of Christianity flourished during Christianity's early formative years. Probably the single most threatening movement of the time was a group known as the Gnostics who formed from a variety of sources and traditions and who were often referred to as a heretical movement by the Christian church forefathers. The strength of Pagels work shows that although Gnostic and orthodox Christians believed in God and the value of sharing a relationship with God, they differed greatly in their approach to knowing and understanding God. Gnostics believed that one could know God by gaining insight into oneself, and that by knowing oneself, one might understand human nature and destiny. In general, Gnostics maintained an equality amongst individuals and established no fixed orders of clergy. They allowed all individuals to seek to know God through their own experience and to achieve personal enlightenment through rigorous spiritual discipline and self-discovery. Unlike the Gnostics, the Christian church developed as a religious structure to encourage social interaction amongst individuals and required only that individuals accept the simplest essentials of faith and a variety of celebrated church rituals. Pagels work also succinctly shows the interaction between the two forms of Christianity and challenges the reader to explore the very meanings of the movements on the Christian tradition of today. The essence of the book reveals that the survival of the Christian tradition was dependent on the organizational and theological structure of the emerging church and that the emergence of the religious hierarchical structure of the church seemed to mirror the difficult times of the growing social and political forces of the governing body of that time. Furthermore, the movement to institutionalize Christianity, created a leadership structure that consisted of a small band of persons (bishop and priests) who stood in a position of incontestable authority to define how individuals could know God. Pagels postulates that mounting alienation from the world in which the individuals lived combined with a longing for a miraculous salvation as an escape from the constraints of political and social existence of the time, gave the necessary strength and power to create the burgeoning orthodox Christian church. A shortcoming of the book concerns Pagels personal indifference in the final chapter of the very core truths of Gnosticism that she so vividly

Published by Thriftbooks.com User , 25 years ago
Christianity has shaped Western civilization much more than we care to believe in these agnostic times. Some of our most basic ways of thinking can be traced back to those chaotic years in the first few centuries of our era when people were trying to form a systematic theology from the teachings of Jesus. The Biblical canon had not yet been formed, and what we now call orthodoxy was just one of many systems. Among the different interpretations in this ferment were those called Gnostic, and I have long tried to understand exactly what Gnosis was. I found Dr. Pagels' short book to be a masterwork of clear and concise scholarly thinking. Gnosis was not so much a doctrine but a way of doing religion that emphasized a very individualistic approach to God, propagated by close mentor-student training. Gnostics tended to exclusive and restricted to intellectuals and ascetics. This was in opposition to the more 'mainstream' church, which wanted to be universal and inclusive, with a well-defined hierachy of priests and bishops. Thus, the struggle was sociological and political as much as it was religious. I have read through Dr. Pagels' work several times, and it is among the best books I have come across on any subject
Trustpilot
Copyright © 2022 Thriftbooks.com Terms of Use | Privacy Policy | Do Not Sell or Share My Personal Information | Accessibility Statement
ThriftBooks® and the ThriftBooks® logo are registered trademarks of Thrift Books Global, LLC