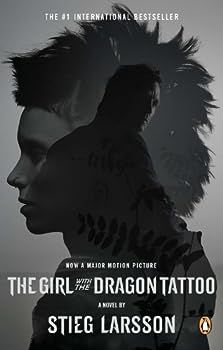 The Girl With the Dragon Tattoo

(Book #1 in the Millennium Series)

Murder mystery, family saga, love story, and financial intrigue combine into one satisfyingly complex and entertainingly atmospheric novel, the first in Stieg Larsson's thrilling Millenium series... This description may be from another edition of this product.

Really worth the time to read

Published by Marie , 7 months ago
One of the best books I've ever read..A very strong character .well written.

Published by Jen , 9 months ago
I prefer books that are surprising with unpredictable plots and settings. The type you don't why to put down. This fits the bill. The Girl series doesn't make for easy reading however if you're willing to put in the time to become immersed this abs the others in the series are worth the read.

Under the dust jacket was The Da Vinci Code

Published by Irene , 10 months ago
I ordered this book a year ago and finally sat down to read it today. I was disappointed when I opened to the title page and saw “The Da Vinci Code.” I took off the dust jacket and, sure enough, I was sent the wrong book in the dust jacket of the book I ordered.

Published by Babycakes , 1 year ago
I loved the movie but just could not get through this book. I found it dull and boring.

Published by JennM , 1 year ago
The style of writing grabs you and pulls you in. You really can't put this down until you reach the last page. Then you want more! Just outstanding writing, an outstanding story, and it's not too fantastical that you feel like your reading fiction. The girl with the tattoo just might really have existed... she just might really have done all these things. Her struggle internally and externally is relatable and you truly cheer for her with each chapter. This is no happily-ever-after fairy tale. There is sad truth, and horrible people portrayed here that unfortunately exist in reality. There is the awful criminal underworld that all countries have where human beings are commodities and not people. I don't recommend for tweens, but high school age and up is ok, depending on the maturity level of your teen. Showing kids how to refuse to be a victim is never wrong. Worth reading over and over - get the whole series!

Published by alex , 1 year ago
The cover is different from what was advertised :/

Larsson's Books are Not "Easy Reading" But They are Fascinating

Published by Sharon , 2 years ago
Stieg Larsson wrote an incredible trilogy of books about the complicated, imperfect heroine, Lisbeth Salander. I read this book more than once because the details are so rich, and Larsson lays the groundwork for subsequent books. These books are definitely not "easy reading" but are worth the time you will invest. The series is unsettling, informative, and rich in details and plausible plot twists. Sadly Larsson died before the 4th book in the series could be finished and published. There was a feud between his family and his live-in girlfriend who wanted to have his book finished and published but the family elected to go with another writer whose vision for the continuation of the series is clearly not the same. I would have loved to see what Larsson envisioned. Read this book and the two after. They are entertaining, and you will learn a lot about cybercrime and tracking down those who would abuse women. Larsson was a great storyteller. This book is definitely not for young readers.

Published by Bibliophile , 3 years ago
I highly suggest this book and the two that follow after it, as they was written by Stieg himself, but the others are written by someone that lacks the 'flame', 'heart' and just totally rips the guts out of Lisbeth Salander, and they aren't very well written, in my opinion. I only read them, because I love Lisbeth and long for her to end up with Mikel and have a wonderful life together.

Published by Thriftbooks.com User , 4 years ago
well it took quite a few pages to really get it going I say first 75 I almost gave up lol but I'm glad I didn't I loved it I'm now on last book in series!

Published by Thriftbooks.com User , 6 years ago
I recommend everyone to read the Millenium series which include The Girl With The Dragoon Tattoo. I love Lisbeth. And I really appreciate Stieg Larsson's writing style. Lastly I just want to say thank you to the translator Reg Keenland.

Published by Thriftbooks.com User , 12 years ago
FASCINATING. ONCE YOU START READING YOU WILL NOT WANT TO LEAVE THE BOOK. AND, WHEN YOU FINISH THIS NOVEL YOU WILL BE RUNNING TO THE NEXT BOOK OF THE TRILOGY.

Published by Thriftbooks.com User , 14 years ago
The Girl with the Dragon Tattoo is a masterwork of fine craftsmanhip. When I reached the final page I was disappointed that there was no more to read. I did not want the story to end. The characters are too intriguing for this to be the end. Apparently this was the first novel in a trilogy by the brillant writer, Stieg Larsson, who unfortunately died in 2004: the book contains a tribute to him and his career. I cannot wait to read the sequels scheduled for release in the USA in 2009. The Girl with the Dragon Tattoo is an international best seller and is set in Sweden. It takes a little effort to get accustomed to all the Swedish names and places but then the story moves with lightening speed. There are two key plots happening simultaneously. In one, a Swedish financial investigative journalist publishes a libelous attack about a powerful industrialist and is sentenced to jail, fined a ruinous sum, and has his career torn to shreds. Another industrialist, Vanger, hires the journalist to investigate the 36 year old disappearnace of his then 14 year old grand niece. There has been no trace of her in all these years and she is assumed dead. Yet, every year on his birthday, he receives a mysterious gift of a pressed flower, mimicking a gift his missing grandniece used to give him when she lived there. Vanger, an old man, is tormented by the flower gifts, and wants one more chance to find out what happened to her and who killed her. What the journalist uncovers about the Vanger family's hitherto unknown secrets and connections to the Nazis, will have you hanging on the edge of your seat. The book is titled after yet another character, Lisabeth Salander, a societal outcast and social ward of the State, uncivilized without any desire to obey societal norms, and replete with piercings, tattoos, and a goth/biker appearance. In short, at first glance a totally undesirable and unsympathetic person. She is a researcher with a corporate security firm and ends up working with the journalist. In truth, she is a survivor of abuse in all forms with low self esteem, and an inablity to trust. She is a genius with Asberger's Syndrome, a form of autism, who sees patterns in things ordinary mortals miss and uses incredible computer hacking skills to accomplish her goals. She is fascinating: ruthless and tough to a fault, yet internally vulnerable, struggling to comprehend her own feelings. She has an appeal that draws you to her, rooting for her, and wanting to understand her. Lisabeth is unforgettable, unlike most characters that populate mystery thrillers. There is such depth here. The book is a thriller on many levels: The story about the Vanger family itself, the journalist's crusade to redeem his reputation, Lisabeth's vendettas and development, and of course, the truth about what actually happened to the missing Vanger heiresss. This is a superb novel and impossible to put down. Utterly stunning. Probably the year's best book. SUMMER 2009: SE

Couldn't put it down to the last page...

Published by Thriftbooks.com User , 14 years ago
The novel is really rich in detail and quick paced -- And incredibly moving in depicting the struggles faced by its female protagonist. This novel somehow brings off having two really well drawn protagonists, one male, one female that one can empathize with. A middle aged journalist, and a troubled but incredibly talented young woman who works as a PI intersect to solve a labyrinthine plot. Lisbet's story would have made an incredible novel on its own. She has Aspergers and is trapped in an awful school /social system with no advocates and non-existent mental health services. It is really dark in its themes somewhat like the Kite Runner. The complex mystery, thriller aspects are really good, and then the whole other aspects of the novel which is also a social comment on society in Sweden, journalistic ethics, misogyny, and gut-wrenching sexual violence. So prepare to be disturbed by the darkness it depicts. The only thing that bothered me a little, though the incredible characterizations and plotting made up for it totally was the out of time technology -- It seemed like the novel was set in the 90s, but all of the technology action seemed to be happening in the late 2000s. So the technology used in the plot time lines seemed a decade out of whack sometimes. I will go back and read it and see if its something I misunderstood. All in all, its one of the best mystery /thrillers I've read from the last decade. In fact comparing it to the Da Vinci Code, the characters are not simplistic one dimensional cut outs at all. The rich characterizations and explorations of dark behaviour remind me of Elizabeth George. I'm waiting for the two final books of this trilogy. It is so sad that the author has passed away and we won't be meeting the characters for more than just 3 books.

The Girl with the Dragon Tattoo Mentions in Our Blog