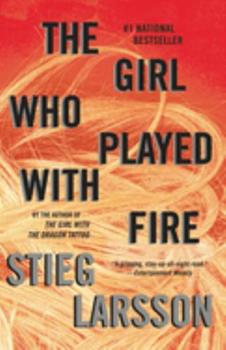 The Girl Who Played with Fire

(Book #2 in the Millennium Series)

#1 NATIONAL BESTSELLER - Part blistering espionage thriller, part riveting police procedural, and part piercing expos? on social injustice, this follow up to The Girl with the Dragon Tattoo is a "gripping, stay-up-all-night read" (Entertainment Weekly). The next installment of the Millennium series: Mikael Blomkvist, crusading publisher of the magazine Millennium, has decided to run a story that will expose an extensive sex trafficking operation...

Published by Marie , 9 months ago
Wasn't as good as the first in the series but on the other hand had some really good characters..They kept me reading it..No weak woman in this book.

Published by Bibliophile , 3 years ago
If you haven't read his books, I would highly advise you to. I suggest you read the first 3 that was actually wrote by Stieg, as the other books that are ghost written, don't have the same feel or heart, and leave something to be desired.

This author really knows how to keep you hanging!

Published by Faith , 3 years ago
I really like mystery/thriller books and this one was everything I thought it would be. I could hardly put it down! If you like thrillers, this is a book for you. I have read 2 of Stieg Larsson books and loved them both. Waiting to read the next one. There wasn't anything about this book that I disliked.
Published by Thriftbooks.com User , 5 years ago
Enjoyed this book more than the first! The book is hard to put down and can burn through 100 pages real quick. Can't wait to start, The Girl Who Kicked the Hornets Nest

Published by Thriftbooks.com User , 12 years ago
Perhaps the product details were not available when you bought the book, but they currently state that the language is German. Hope that this helps others!

Published by Thriftbooks.com User , 13 years ago
In The Girl With the Dragon Tattoo, Lisbeth Salander electrified the story, even though she had a relatively small part in the plot; here, in the second novel of the series, she is given center stage to Blomkvist's secondary role, making The Girl Who Played With Fire much tauter, more exciting than the first book. Larsson begins to expose what makes Salander tick, and the result gives her character an interesting vulnerability, one that makes her more human and less crazy. But let's get one thing straight; even with the more humanizing portrait, you would not want to corner Salander in a dark alley. Nor do you want to give her access to your computer. She is every bit as gritty and clever as she was in the first, and her stark determination to live by her own moral code drives the plot. When a journalist working for Blomkvist and Berger and his PhD candidate girlfriend are murdered, it's bad enough, but when those murders are linked to that of Salander's sadomasochistic guardian, Salander becomes the only suspect. On the lam, she seems to make no attempt to clear her name and instead gets in deeper. Throw in a "blond giant" (similar in many ways to the albino monk of The DaVinci Code), the seedy underpinnings of the sex trade, and returning characters, and you've got a suspenseful, likable, satisfying thriller. As a pure thriller, The Girl Who Played With Fire is stronger than its predecessor because it has fewer meandering subplots, more unrelenting suspense, and more deftly drawn characters, even if Larsson occasionally resorts to types. The author seems to have found his narrative stride with this. If you liked the first, you'll love the second. I just hope Larssen's third manuscript was polished enough before he passed away to build on his already finely-tuned skills as a novelist. -- Debbie Lee Wesselmann

Published by Thriftbooks.com User , 13 years ago
It's a tragedy for world literature that Stieg Larsson is dead, and we'll never have more than three books with Lisbeth Salander as the heroine. She's an absolutely fascinating creation. This is the second book in the series, and every bit as riveting as The Girl with The Dragon Tattoo. In the eyes of Sweden's social services system, Salander is a deeply disturbed person who needs a guardian to supervise her and handle all her affairs. But unbeknownst to the authorities, she's a world-class hacker with a photographic memory, brilliant at chess, wildly rich from an Internet coup - and a vicious fighter. For relaxation, she has sex with men or women, as the spirit moves her, and reads books on spherical astronomy and higher mathematics. All this in a very small package: Salander stands less than five feet tall and weighs 90 pounds. The plot of this book is too complex and full of twists and shocks to summarize. But to oversimplify, three people are murdered because of a book two of them are writing about sex trafficking, and Salander, by a quirk of circumstantial evidence, becomes the prime suspect. Salander is in hiding for much of the book, baffling all the cops, well-wishers and thugs looking for her, while doing her own highly irregular detective work. In her twenty-five years of life, Salander has come in for a lot of sexual abuse. But she also has a genius for pay back. Her unique display of brains and aggression is utterly satisfying. The characters in this book are wonderfully drawn, the pace breathtaking and the fight scenes terrific. I can't wait to read the third book in the series.

Second Time Is The Charm

Published by Thriftbooks.com User , 13 years ago
In the first of the series, originally titled in Swedish "Men Who Hated Women", Larsson did a magnificent job in setting up an absolutely unforgettable literary character -- Salander. Where part one of this trilogy fell short was in the too often sideways plotting, i.e. too many red herrings that added little, too many subplots, plus an inability to avoid multiple endings. However, in "The Girl Who Played With Fire (and I would love to know what the original Swedish title is), Larsson, in addition to layering depth to Salander's incredibly unique character, at once creating backstory and thus motivation, he also writes (yes, even at 649 pages in the British paperback edition I read), a very tight plot where virtually all the clues, surprises, and discoveries are well earned. This one is the masterpiece of the two -- so far -- as there is the third and final book to come. Still, it's necessary -- and no less rewarding -- to read "The Girl With The Dragon Tattoo first. You'll not be disappointed in either. You'll even learn a bit about Swedish politics, but most importantly about gender politics in the context of a first class literary thriller.

Published by Thriftbooks.com User , 13 years ago
This is the follow up to The Girl With The Dragon Tattoo. I suggest you read that one first, though this novel is reasonably self-contained. This book opens with Lisbeth Salander enjoying her newly ripped of wealth lazing in a hotel in Granada. No one knows where she is (as usual), and back in Sweden, Millenium magazine are preparing a an expose of the sex slave business in Sweden. The journalist who is preparing the expose is murdered, along with his partner, and Salander's legal guardian. Salander, now back in Sweden is the prime suspect, and the police hunt is on. To say things get complicated from this point is an understatement. There are multiple investigations (Salander's of course, the police and Millenium's), multiple suspects, more murders, red herrings galore, and just general mayhem. Dark as all this is, it is actually quite funny in places: the police have no idea at all what is going on, despite a well meaning and competant detective in charge. This is all tremendous fun for the reader. It is as anything remotely boring (and probably realism suffers) has been left out, yet despite the novels sheer page turning ability, (I read this too fast, I will need to read it again), it still has the power to inform. So buy it, read it once, and then read it again.

The Girl Who Played With Fire Mentions in Our Blog