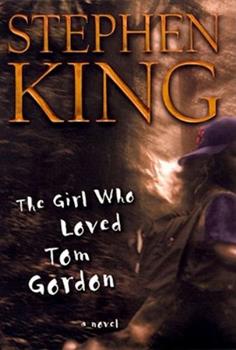 The Girl Who Loved Tom Gordon : A Novel

From international bestseller Stephen King, a classic story that engages our emotions on the most primal level, a fairy tale grimmer than Grimm but aglow with a girl's indomitable spirit. What if the woods were full of them? And of course they were, the woods were full of everything you didn't like, everything you were afraid of and instinctively loathed, everything that tried to overwhelm you with nasty, no-brain panic. The brochure promised a "moderate-to-difficult"...

Published by Thriftbooks.com User , 3 years ago
If you love stories of kids in dark situations, scary forests, and imaginary things then this is the book for you!!!!!!!!!!!! Seriously it's really good I love it

Published by Thriftbooks.com User , 13 years ago
I also read this all in one night. I could NOT put it down! King uses his natural storytelling genius to pull in the reader. Absolutely terrifying! Now if only his newest stuff could live up to his novels like this...

Published by Thriftbooks.com User , 13 years ago
I have read King books over the years, some but not all, and frankly, I had stopped reading them. My complaint was that there was always a totally unnecessary ugly event happening to a child, usually a death, that when you finished the book, you say, was that really important to the story? Like the girl dieing in "Langoliers", or the boy shooting himself in "Needful Things", the murdered twin girls in "Shining", the kid in "Cujo". I am not afraid of these elements, but they need to be important, and finding them not important, I got turned off. Well, here comes a book that features one main character, a kid, and I'm thinking, this is a disaster in the making (for me). I didn't read it for several years, it sat on a bookshelf (I gave it to my daughter as a gift, she was really into King novels for awhile). Well, I picked it up in a hurry the other day for a weekend plane trip, and read it, and I am blown away. It was not predictable, and it was simply, very moving. Very moving. I don't want to give away any of the story elements, because I do recommend it. If you're not moved at the end of this story, then your emotion switch is not functioning!

Published by Thriftbooks.com User , 14 years ago
I picked up this book on a Saturday afternoon and read it overnight. It is definitely entertaining and interesting. I expected it to be scarier, but then again if it was, you'd be quickly leading down the path of Blair Witch...which I'm actually glad it wasn't. The outcome was pretty predictable and it's very short for a King book, but I'm glad I bought it. I agree it keeps you on the edge of your seat.

Much More than a Walk in the Woods

Published by Thriftbooks.com User , 21 years ago
While Stephen King continually gains respect from literary critics, his work remains controversial to many. People often dismiss him out of hand as a crass horror author. Rather than being so narrow minded, I would suggest reading this book. I will freely admit to being a fan of his work since I was in junior high, and as a fan, I felt that this novel took me places that even King's work sometimes misses. I was IN those woods, feeling every bug bite and painful bodily function that Trisha went through. I held my breath and read non-stop to see if she would make it out. And most importantly, I totally bought into her faith in Tom Gordon--if she could just believe enough, he would be her savior. Yet, he was also a part of her own mind, so in essence, she was her own savior. This work displays King's ability to leap outside of the horror pigeon-hole in which so many place him. His writing ascends to the lyric, while retaining its everyman feel. I think that this book could convert even King-haters into his camp. I've recommended it to a few that I know and the results have been completely positive. Even if you do not usually read Stephen King's work, try this--I think that you'll find it hard to put down.
Copyright © 2020 Thriftbooks.com Terms of Use | Privacy Policy | Do Not Sell My Personal Information | Accessibility Statement
ThriftBooks® and the ThriftBooks® logo are registered trademarks of Thrift Books Global, LLC