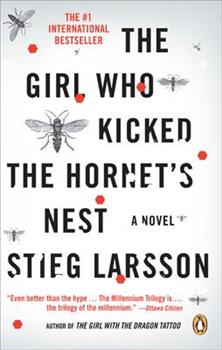 The Girl Who Kicked the Hornet's Nest (Millennium Series)

#1 NATIONAL BESTSELLER - In this "thoroughly gripping read" (New York Times), Lisbeth Salander lies in critical condition in a Swedish hospital, a bullet in her head. But she's fighting for her life... This description may be from another edition of this product.

If the series had to end, this was the perfect conclusion

Published by Thriftbooks.com User , 12 years ago
I came to this novel with great trepidation. I'd loved the first two novels in the series and was understandably saddened by the premature end due to the author's untimely death. Aside from that, I was worried that the novel would end with some terrible cliff hanger as the previous one had. For what it's worth, I'm happy to report that if this series had to end now, I'm completely satisfied with how the story of Lisbeth Salander, Mikeal Blomkvist, et al wraps up. As mentioned above, The Girl Who Played with Fire ends on a cliff hanger. The Girl Who Kicked the Hornet's Nest picks up exactly where it ends off. I'd liked the second novel in the series much more than the first because it dealt far more extensively with the eponymous character. That is also the strength of Hornet's Nest. I just can't get enough of Lisbeth Salander. She is endlessly strange, fascinating, endearing, and resourceful. This final novel strikes the best balance of the three between Lisbeth's story and Mikeal's story, which essentially converge at this point. But other characters get their fair share of narrative time and a subplot involving Erica Berger particularly captured my interest. Every storyline allowed Larsson to show off new facets of his established characters. One of the most fascinating things about the plot of this book (which obviously I'm being incredibly vague about) was that in another novel, the good guys and the bad guys could have easily switched places. There are no cookie-cutter heroes and villains in Larsson's world. Sure, there are people to root for, but there's a lot of moral ambiguity involved. All of which makes for complex and smart story-telling. And Larsson's plotting is as strong as it ever was. This novel is his best yet. At nearly 600-pages, I plowed through the book at breakneck speed, my interest never flagging. It is sadly clear to me that Larsson had further stories to tell about his girl. Not every loose thread is tied up, but the important bases are covered. The novel's end was as satisfying as anything you could ask for. Rest in peace, Stieg.

Tips on How to Read a Stieg Larsson Novel!

Published by Thriftbooks.com User , 12 years ago
It was bittersweet to finish the last novel of Stieg Larsson's about Lisbeth Salander, "The Girl Who Kicked the Hornet's Nest". What a unique and fascinating character Lisbeth has been throughout the three novels. This last of the triumvirate begins the very moment that the last one leaves off. I highly recommend that one reads these novels in order for the best effect. I've enjoyed them all thoroughly and found the conclusion to be immensely satisfying. Others reviewers have summarized the plot, and described the qualities and shortcomings of the novel, but I would like to take a moment to help readers who may be a bit daunted by Larsson's work. So here are my Tips on How to Best Read a Stieg Larsson "Girl" Book: * Read it in hunks of time. Larsson's books aren't amenable for dipping in and out of in 5 or 10 minute increments. If you do that, you'll spend most of your time backtracking to get back into the complicated flow and plot. It's best to devote some time so that you can keep up with the pace. * Don't be embarrassed if you need to make a character "cheat-sheet" - it's difficult to remember all the characters and it's cumulative; "The Girl Who Kicked the Hornet's Nest" has all the characters of the first two novels in addition to its own set! Larsson had nothing on Tolstoy for a long list of characters...and with the Swedish names being unfamiliar to the average American reader, it can be even more confusing. Just look at some of the "B" names: Blomqvist, Berger, Bublanski, Bjork, Bjurman, Bodin, Beckman, Berglund, Billinger, Badenbrink, Bladh, Borgsjo...then there is a Niedermann and a Nieminen and a Malm and a Malin...too similar to keep straight. Which are the cops, which are journalists, which are villains, which are heros? * Don't be discouraged by the techno-babble. The first book has a comprehensive description of International Business standards and practices, the International Banking system, as well as specific Swedish business practices. The second book has a long and technical section about computer systems and hacking processes, the third book goes into great detail about the Swedish Secret Police and Sapo operations and super-secret sub-ops. Don't feel daunted by these, you don't need to understand every nuance to enjoy the story! * Suspend judgment on the Swedish justice system and some of the "morals" of the characters. It would be, in my opinion, unpleasant to read these books while constantly thinking: "That wouldn't happen in the US!" or "We do things better in the US." so don't. As for the character's "morals"...there are villains who are 100% villains in these books, but there are no "heros" who are 100% heroic or fault free. Sweden never had the Puritans like we did, so their views on sex might be a little different than the average American's. All this is part of what is interesting , educational, and intriguing about these novels. * Enjoy!

Published by Thriftbooks.com User , 13 years ago
I started reading the Trilogy a few months ago, I am a 100% satisfied with the Book, definitely fulfilled my expectations. A shame that no 4th book will be available.

Published by Thriftbooks.com User , 13 years ago
Just as Tolkein's "Lord of the Rings" is held up as the trilogy to which all fantasy trilogies are inevitably compared, I've little doubt that Larsson's Millenium series will play that benchmark role for mystery thrillers over the next few decades. "The Girl Who Kicked the Hornets' Nest" is an incredibly worthy successor to the previous two books in the trilogy. And toward the end, there will be moments when tears are brought to your eyes. Larrson knew precisely how to play with timing, rhythm, and wording to pace the story and its ending just right. I'm hard pressed to even guess how else he could have ended this series. The story follows the natural conclusion of the events in the first two books as everything dovetails toward a "behind-closed-door" trial. Larrson did a very good job of the first part of this book that takes place in the hospital where Lisbeth is recovering. I really enjoyed reading things from her perspective, then spinning out to others involved and each of their limited pieces of the evolving puzzle. And things just get better as the book moves along. Frankly, once you hit part three of the book, it's almost impossible to put down. I picked it up just once...just to read a chapter or two in the second half of the book...only to find that three hours had gone by and the book was over. Larrson's tying up of many loose ends throughout the book - and this is key - throughout the book (not all in the last few chapters like so many other writers) is masterful. And that emphasizes the one tragic aspect of this final book: knowing that we will never again be graced with Larrson's storytelling mastery.

The Girl Who Kicked the Hornet's Nest Mentions in Our Blog