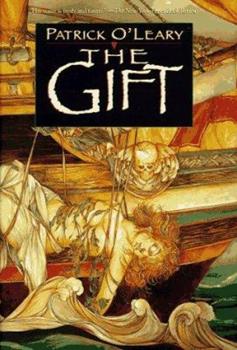 Science FictionLarge Print EditionOLeary displays his mastery of fantasy and social motifs, weaving familiar themes into a heartwarming, enchanting story. starred, Publishers Weekly A story within a story, The Gift is a story of innocence betrayed and magic rejected. Tim is robbed of his childhood, and Simon is tormented by hearing made too acute. Both are victims of The User of the Night, once a boy like them, now pathetically twisted by his own...

a story to keep you up late, unable to stop

Published by Thriftbooks.com User , 18 years ago
This is the first novel I have read by this author but will not be the last. It seems some of the negative reviews came from readers who took the structure of the story too seriously. The book is a brilliant meditation on the joys, pains, power, and responsibility of storytelling in all its forms. Whether it serves to strengthen a bond between friends, help a listener to understand and forgive, to expand the listener's breadth of experience, or to indict the guilty for secret crimes; storytelling is a part of what makes us human as well as an effective means of communication. I read this book over two nights and in the days after became so aware of how often in conversation we are telling tales- not meaning that people are being dishonest- just that people paint a picture of "what really happened" based on what they feel is the message of the story. And it is in telling our own particular and unique stories that others come to know us. I loved the characters, the story, the stories-within-the-story, and yes, the ending. I can see how one would think it contrived or too neat, but I felt as if O'Leary meant it that way as a perfectly fitting lid to this decorative box filled only with more boxes.

Published by Thriftbooks.com User , 21 years ago
I was drawn to Patrick O'Leary's second novel by Tom Canty's always wonderful cover art. I brought it home from the bookstore and thought I'd read a chapter or two. The Gift drew me in and before I knew it, it was nearing 2 am and I had read it all the way through.The Gift is one of those novels that you cannot put down. O'Leary paints a picture every bit as vivid as that on the cover. Writing as emotionally evocative as O'Leary's has in my experience been almost entirely the domain of women authors.I have already read this book twice in less than a year and I know I'll read it again and again.

Published by Thriftbooks.com User , 21 years ago
How delightful to find a book that surprised and pulled me into another world and reality! I had come to believe that I had grown too old and had lost the ability to exercise this pleasure. I am greatful that I did not discover Patrick O'Leary until now and only wish there were more like him.

Published by Thriftbooks.com User , 24 years ago
This is probably the oddest book there is in this genre. Oleary is a new uprising writer, who has a real talent in storytelling. Now, SciFi Fantasy is one thing, but what this guy's doing is a whole lot of a different art. And you'll love every minute of it. This story is actually an excuse for Oleary to do his best - Storytell. The layout is some kind of an Earth-like world, only technologically retarded. It tells the story of the ancient Wind Wizards, who crashed to the planet, and made it their own; it tells the tale of a young deaf King, Simon, who's healed by the dark Usher of the Night, only to become a Sentinel. He then starts on an adventure with only one thing set on his mind - Revenge; it tells the story of a little orphan, Tim, who's destined to more then he's ready to bargain for; it tells the sad story of a lost species of magic, the Watermen, who are at the point of extinction. Science-fiction, Fantasy and Story-telling meet in an exquisite mixture of high-tense adventures, humor, bizzare and night-marish sequences of the S.King kind. If any, this book's worth the reading. You'll LOVE it - every one of its 287 pages.

A wonderful and magical adventure!

Published by Thriftbooks.com User , 25 years ago
I found this book as enjoyable as Door Number Three. It is a fairy tale, with modern overtones, rich in description, and almost surrealistic. This book is more than a fantasy novel; it is a work of literature, beautiful and fearsome. I eagerly await any forthcoming books by Mr. O'Leary.
Trustpilot
Copyright © 2022 Thriftbooks.com Terms of Use | Privacy Policy | Do Not Sell My Personal Information | Cookie Preferences | Accessibility Statement
ThriftBooks® and the ThriftBooks® logo are registered trademarks of Thrift Books Global, LLC