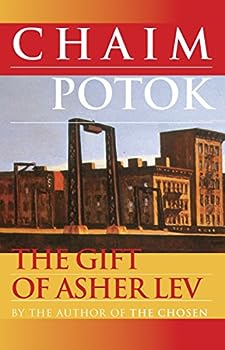 The Gift of Asher Lev: A Novel

(Part of the Asher Lev Series)

This description may be from another edition of this product. "Rivals anything Chaim Potok has ever produced. It is a book written with passion about passion. You're not likely to read anything better this year." THE DETROIT NEWS Twenty years have passed for...

Not art for art's sake

Published by Thriftbooks.com User , 15 years ago
Asher Lev drew outcasts. The people were angered. He had grown up in a Brooklyn apartment. His father worked for the Rebbe. Now, a middle aged man with two children, he lives in the South of France. He and his wife and children travel to Brooklyn because his uncle has died. His uncle had supported his art. He did two crucifixions, paired, and the community was enraged. He arranged to attend a yeshiva in Paris where things would be calm. Asher read in a book that children threw stones at Cezanne when he was an old man. The Hasidim refer to God as the Master of the Universe. The group is called the Ladover community. The last time Asher Lev stayed with his parents there had been death threats. His uncle's watch and jewelry stores supported the Ladover communities. Asher's mother teaches Russian history and political theory at NYU. In the matter of painting pictures Asher Lev disagrees with the Ladover community. In other respects he is a Ladover Hasid. Asher's Uncle Yitzchok leaves a substantial art collection. He put money and energy into the collection. His uncle had said to Asher Lev that he would be another Picasso. Asher's parents want him to lengthen his stay with them. He feels he is being sucked into the sect's and his family's disapproval of his pursuits. A friend believes the Ladover success as a fundamentalist movement on America's secular soil makes it newsworthy. It is both traditional and contemporary, but what about Asher Lev? How does Asher fit in to the scheme of things? Jacob Kahn, Asher Lev's teacher, told him that redemption is death to art. The Rebbe requests that Asher Lev and his family remain longer in Crown Heights. Everyone but Asher is pleased to extend the visit. Asher wants to be back at Saint-Paul. In the Holocaust Asher's wife, Devorah, lost her entire family. Devorah spent two years in the dark in an apartment in Paris. She is enjoying becoming acquainted with Asher's family. Asher has been designated trustee of his uncle's art collection pursuant to the wishes of his uncle and notwithstanding the uncomfortable feelings of his cousins and the widow. Any profit realized from the collection is to be given to the Ladover community. Asher returns to Paris, leaving the children and Devorah in Crown Heights. He has been working under a series of shocks, the deaths of his teacher and uncle, and the savaging by critics of his latest exhibition. In the end her realizes what the crucial dilemma is. Asher Lev agrees to give his family over, particularly his son, to community interests. It seems that his father, as the chief assistant to the Rebbe, is in a position to succeed the Rebbe, but only if he, in turn, has a suitable successor, Avrumel, the son of Asher Lev. The arrangement of living in France is to become a solitary existence permanently on the part of Asher Lev.

This is one of the most important books in my life.

Published by Thriftbooks.com User , 15 years ago
I take my spiritual life seriously -- and so does Asher Lev. I am certainly not any kind of artistic genious, but Lev and I really fell into sinc. In fact, I have read this story so many times that I have been through three paperback copies. And it has never disappointed me. Potok took me so deeply into Lev's character that I was him. I felt his pain and his struggle. I understood his feeling of being torn apart by two worlds that should and could have fit together. This book also provides the deepest insights into Hasidism that I, a lapsed Episcopalian, have ever read. I have a deep respect for that tradition because of Potok and Asher Lev. Sacrifice is always a central storyline and in "The Gift of Asher Lev" not only is a sacrifice required but the sacrifice is wrapped in mystery and enigma. Delightful read!

Sometimes the truth must be told in riddles

Published by Thriftbooks.com User , 18 years ago
Of all the Chaim Potok books I've read, (the last being about 8 years ago) this one has stayed with me the most, perhaps because it perplexed me at the time. Probably most people will prefer the first Asher Lev book, with its clearer narrative and dramatic plot. It covers the painful conflict between a traumatized community's survival and personal creativity so well it seems unnecessary to bring it up again. But to me it was merely the prequel for this second book. Asher struggles to keep his son from being taken from him by the same Chasidic community that had banished him for his artistic intensity. I had the strange experience of being drawn into the books central conflict, only to reach the end realizing that a conclusion had been reached that I was entirely unaware of! So I reread most of the book-- I had to go back very far to pick up the threads I missed-- and noticed an early scene in which the great Rebbe, standing from the balcony overlooking the Ladover community he leads, speaking about the key issue of who his successor shall be-- he has no children to follow him. He speaks in nonsense, something about Ones and Threes, and then explains that when a truth is difficult to bear, it is better to be pesented in riddles than more straightforwardly. So it was with this book, and for me it was one hell of a trick. On the surface, nothing really happens. Asher mopes around Brooklyn and Paris broodingly, draws sketches of passing moments, talks to ghosts of Picasso and his own mentor, Jacob Kahn, and chooses the fate of himself and his son so subtly that it appears to be nothing at all. But it was frightening and wonderful when I finally got what he did: he gave his community the gift of Asher Lev. In the first book, 'the Gift' always referred to how his people saw his artistic talent, as a gift from God. But by the end of the second book, we see the gift he gives back to the community he has such intense love and bitterness for is something completely different.Let me just add that I am a middle aged Jewish artist, about to go back to MY family from a 13 year exile abroad, and this book speaks very closely to my situation. ...

Published by Thriftbooks.com User , 20 years ago
Twenty years have passed for asher lev, last seen dispalying waht sounded like a version of Marc chagalls white crucifixion to a stunned and mortified family. He is, as this novel opens, a very successful artist living in France. When his beloved uncle dies, he ends his exile and returns to Brookly, to the chasidic community he thought h had left behind,to small storefront shuls and men in dark hats and coats,to that place deep inside himself which he could never leave. The travles from Willaimsburgh to Monticello, Ny{the catskills}, and the intorduction of Lev's young son are a lovely narrative touch. The Rebbe,based it would seem on the late Lubavitch rebbe of Blessed memory,is brilliantly,sympathetically drawn. he comes off as a holy,profound man of deep compassion and mystical understanding. Lev has grown, also, and the story of these tow, brilliant men is the key to the novel. A wonderful,beautifully plotted story of an amazing group of people.

One of the most affecting books I have ever read

Published by Thriftbooks.com User , 22 years ago
The sequel to My Name is Asher Lev is that rare achievement - better than the first. I re-read the book about once a year and each time long for the third, to know the path down which Asher Lev and his son Avrumel travel. This family and community is so affecting, I find it hard to accept they do not exist. Potok's writing is truly beautiful and each time I read his work I find more to digest.
Copyright © 2020 Thriftbooks.com Terms of Use | Privacy Policy | Do Not Sell My Personal Information | Accessibility Statement
ThriftBooks® and the ThriftBooks® logo are registered trademarks of Thrift Books Global, LLC