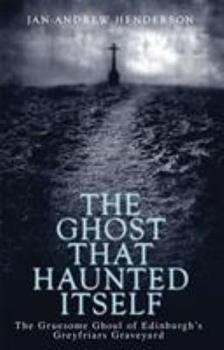 The Ghost That Haunted Itself

Greyfrair's Cemetery in Edinburgh has a centuries old reputation for being haunted. Its gruesome history includes use as a mass prison, headstone removal, witchcraft, bodysnatching, desecration, corpse dumping and live burial. In 1998, something new and inexplicable began occurring in the graveyard. Visitors encountered 'cold spots', strange smells and banging noises. They found themselves overcome by nausea, or cut and bruised by something they could...

Intrigue Mixed With a Bit of Fear

Published by Thriftbooks.com User , 15 years ago
When I first bought this book I thought, "Oooh...creepy ghost stories...just my type". I didn't realize however that I was about to open a book that was full of more than just "creepy" ghostly happenings. The story of Greyfriar's cemetary is one that is widely known throughout the area, yet I knew very little, but this book changed that. While explaining the events and happenings that surrounded the MacKenzie poltergeist it also explained all the scientific, historical, and otherwise basic information. There were times when the book fell a little slow, but it almost came back in full swing with another frightening story of the poltergeists abilities. This book isn't about to scare you into hiding under your covers, but it'll sure give you the creeps. I, myself am finding that I'd love to visit the cemetary and take the City of the Dead tour myself just to see what happens...

Published by Thriftbooks.com User , 17 years ago
I've been on the City of The Dead tour twice and it's everything this book describes it to be. I got this book after my second outing to greyfriar's because I find it so interesting. The book tells the history of the Kirkyard, the history of Mckenzie and a (dramatised) account of what the guides encountered. by dramatised I mean it's told in story form as opposed to a basic statement. However, Henderson's way of telling his story is comical and I found his comments about his guides (and incidentally the ones who took me on the tours) highly amusing. I like the bit where one visitor had his new leather coat ripped in the Black Mausoleum by something he didn't see or feel. Henserson went on to tell us how alarmed the guides were to hear this. Not because of the cuts bruises and collpses, but because they all wear long leather coats as part of ther uniform. There are also statements from the guides themselves, and visitors who experienced collpases and injuries in the tomb. I remember City of The Dead being on the news, in the papers and even featured on GMTV because of what they found. Another good point about this book is that there is absolutely no attempt made to prove the existance of the ghost. It's not as if Henderson is trying to sell his tour by exaggerating everything. He makes it clear that he is not sure what is there. If it's a ghost or not. There is something, but what it is he can't explain. There are theories put forward, both scientific and those of the guides, but none put words in the readers mouths. We are presented with what happened on the tours, and we can make up our own minds. All I can suggest is that those who haven't done the tour do so. Even if nothing happens (nothing weird happened on either of my tours by the way) it's still a hugely enjoyable night and the book is the perfect addition.

Published by Thriftbooks.com User , 18 years ago
I enjoyed this book so much, that I've read it twice. If you are into the paranormal, you'll find this information very interesting. I'm dying to go to Scotland to check out the tour!

Published by Thriftbooks.com User , 19 years ago
The end of this book is scary, wicked scary.

Published by Thriftbooks.com User , 19 years ago
Being from Edinburgh I thought I would be a little disappointed that this book would be "another old Edinburgh ghost book". Wrong! Greyfriars kirkyard can be quite scary in the daytime even when the sun is shining and this book certainly enhanced that view and made any contemplated visit at night seem both terrifying - and inviting! It was simply one I could not put down. It is written in an almost documentary-style way which made for easy reading. An excellent read which I was sorry to finish.
Trustpilot
Copyright © 2022 Thriftbooks.com Terms of Use | Privacy Policy | Do Not Sell My Personal Information | Accessibility Statement
ThriftBooks® and the ThriftBooks® logo are registered trademarks of Thrift Books Global, LLC