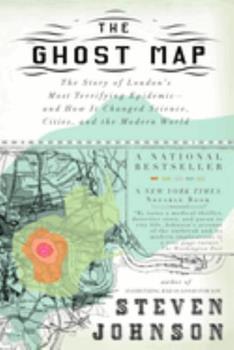 The Ghost Map: The Story of London's Most Terrifying Epidemic--And How It Changed Science, Cities, and the Modern World

A National Bestseller, a New York Times Notable Book, and an Entertainment Weekly Best Book of the Year from the author of Extra Life "By turns a medical thriller, detective story, and paean to city life, Johnson's account of the outbreak and its modern implications is a true page-turner." --The Washington Post "Thought-provoking." --Entertainment Weekly It's the summer of 1854, and London is just emerging as one of the first modern cities in the...

Not just intriguing, but thought-provoking

Published by Thriftbooks.com User , 15 years ago
In the wake of Dava Sobel's _Longitude_, we've seen a lot of books about how [something] "Changed/Made/Shaped the World." I've read a good many of these books, and liked most of them. But _The Ghost Map_ is a standout. The reason is that Johnson has assembled, not simply a collection of facts, but a *story*. Certainly, the history of Dr. John Snow and Rev. Henry Whitehead is fascinating in itself. Johnson has done a lot of meticulous research, and his writing is vivid--sometimes brutally so. As with many of these books, he bulks out the chronological narrative with discursions into related topics. But then he does something that most other authors haven't done: he brings the discursions and the central story together into a single thematic whole. Johnson makes the case that the real significance of Snow and Whitehead's actions was that they marked the emergence of science and rationalism over ignorance and superstition. The defeat of the old (and tenaciously defended) "miasma" theory of disease was a watershed moment. Modern cities, Johnson argues, can exist--and provide immense benefits--only because of this sea-change in human thinking. Now, if you disagree with this conclusion, you'll probably dislike _The Ghost Map_. Nonetheless, in tying his threads into a coherent package, Johnson has gone the extra step that most similar books have skipped. The books isn't just historical/scientific facts; it's an argument, a foreceful defense of reason and civism. Snow and Whitehead didn't cause the change that the book's subtitle refers to, but their presence illuminates a crucial moment in that process, and Steven Johnson deserves extra credit for pointing it out.

Published by Thriftbooks.com User , 16 years ago
In a dramatic, harrowing and heroic narrative, Johnson recreates the London of 1854 in all its teeming modernity and pestilential filth. Viewing the devastating cholera epidemic of that summer as a pivotal point in the history of the modern city, Johnson describes a city on the verge of imploding from its own success. Population had doubled in the previous 50 years, to 2.5 million. The scavengers alone numbered 100,000 and without them the city would have soon succumbed to its own filth. Busy in their niches, the pure-finders, mud-larks, bone pickers, dredger men, bunters, toshers and others recycled the city's waste, eking out a living. The night-soil men cleaned out the cesspools and carted the waste to farms. But as the city sprawled, their journey grew longer and more expensive. Property owners, particularly landlords, chose to let it accumulate in the cellars rather than pay to have it carted away. The modern and celebrated sewers and the sanitary and popular water closet just made things worse, flushing raw sewage into the Thames. On a night late in August an infant came down with cholera. How she got it no one knows, but the microbe made its way from the open cesspool below the family's house into the Broad Street water supply - a particularly clean and envied pump that attracted users from all over the neighborhood. In the next days whole families died with terrifying swiftness. Johnson imagines their anguish and fear and the mental outlook of people who knew they could wake healthy in the morning and be dead by nightfall. The bravery of a young clergyman, Henry Whitehead, was not only kind but important. It was his neighborhood and he visited and nursed the sick, making his way from one overcrowded, foul-smelling room to the next. His open-mindedness and powers of observation would prove to be no small thing. In graphic detail Johnson describes the course of cholera and its evolution, showing how human cities created a flourishing haven for this opportunistic microbe, allowing it to spread so fast it had no need to keep its host alive. Meanwhile the prevailing belief - among scientists as well as the population at large - was that disease was caused by miasma - foul smelling air. Johnson explores this conviction from the point of view of our own evolution, showing how, once again, city living confounded the Pleistocene brain. But one man, physician John Snow, bucked conventional thinking. A brilliant man from a working class background, he had already attained stature in the burgeoning field of anesthesia. His observations of previous epidemics led him to suspect the water supply. Again, Johnson shows how various factors, among them Snow's origins and his home in the Broad Street neighborhood, contributed to his success. Although there was considerable resistance from city officials and the medical establishment, the city agreed to shut down the Broad Street pump. The epidemic ended. But it had been winding down anyway. And Whit

History With A Warning

Published by Thriftbooks.com User , 16 years ago
The Ghost Map is an engrossing tale of medical detection and discovery. In 1854 a London neighborhood was suddenly plunged into a massive cholera epidemic. The actual disease was awful enough, but ignorance added to the fear felt by Londoners, because no one understood the true method by which cholera spread from one victim to another. Prevailing medical opinion held that cholera, like nearly all other diseases, was spread through miasmas, bad air and bad smells. Two men, Dr. John Snow and Rev. Henry Whitehead, began to suspect that the true culprit was water from the neighborhood pump and conducted an assiduous investigation that finally proved them right. Although most doctors and scientists were reluctant to discard the miasma theory, eventually the weight of the evidence convinced them that Snow and Whitehead were correct. Like all good histories, The Ghost Map branches from the main story to trace the many different ways in which Snow and Whitehead's investigations helped lead to the development of modern cities. I especially enjoyed the final chapters and epilogue, in which Johnson identifies many ways in which our modern mega-cities are both more vulnerable (yet thanks to technology and communications safer and better able to cope with threats as well) than was London in 1854. The Ghost Map is an engrossing read, well written, scholarly, yet dramatic too. It will appeal to historians and fans of medical detection alike.

Published by Thriftbooks.com User , 16 years ago
This is a very well-written book that tells an important story in the evolution of cities and introduces us to two fascinating characters in history. However it is much more than that. It is an essay on the role of cities in our civilization, on the scientific method, and on the role of micro-organisms in history. My criteria for a book of this type; 1) Tell an interesting story; 2)tell it well, 3)make me think more broadly; 4) make me aware of new interconnections. This book does it all. I had four books on my "to read" list when I picked this up. It was the first finished.

Fascinating: A look at the past, A look into the future.

Published by Thriftbooks.com User , 16 years ago
This is surprisingly, one fascinating and important read that spins the historical reality of pathogenic disease with a well crafted story regarding the plight of a society facing a treacherous epidemic. Combining an in-depth view regarding the indefatigable energy and brilliance of Dr. John Snow in his quest to solve the deadliest outbreak of cholera in the history of London, with the history of epidemic plagues, `The Ghost Map: The Story of London's Most Terrifying Epidemic- And How it Changed Cities, Science, and The Modern World' provided me with one page-turning, gripping historical tale that also provided further insight into the plight free societies face today in lieu of the possabilities of biological or chemical attacks on innocent people. When I was recommended to read Steven Johnson's book, it was not for the sake of diving into a good read, but rather to `browse' through it for further insight on the origins of water contamination and how, thru these origins, terrorist could look at contamination for horrific purposes. As a writer with an interest in international affairs, and a tendency to use fiction storytelling to share my views, I opened Steven Johnson's book and within pages was completely hooked on this extraordinarily written, well researched tell all of the London epidemic of cholera that killed so many lives. With reflection on how science viewed pathogenic outbreaks during the midpoint of the 19th Century, it was startling to find that there really existed a classification system that gave all sorts of bizarre reasons why a disease would spread, including a weight based upon wealth and financial disposition! We sure have come a long way . . . or have we? I guess we can still look at Africa with great outrage and clearly say we're back in London during 1854! And this folks is important: in Johnson's attempt to share the history of the past, what he really is doing is talking about the immediate needs of to protect the most impoverished with assistance to medical treatment, and ongoing diligence to understand the nature of disease and how wide-spread health concerns effect not only those who are directly in contact with a pathogenic, but equally as important: how societies infrastructure's essentially crumble when epidemic disease spreads. Writing with such an easy style that readers will not get lost, Johnson takes us on a fascinating trip with Dr. John Snow; clearly one of the scientific pioneers whose actions have saved the lives of untold people. Take your time and sit back with `The Ghost Map': it may bring you a bit closer to acting in a socially responsible way that connects all of us a bit further. It may even cause you to open your wallet and send a few much needed dollars to health care organizations attempting to follow the lead of Dr. Snow: determining pathogenic causes and feverishly attempting to help those in need. Steven Johnson's `The Ghost Map' is simply brilliant.
Trustpilot
Copyright © 2022 Thriftbooks.com Terms of Use | Privacy Policy | Do Not Sell or Share My Personal Information | Accessibility Statement
ThriftBooks® and the ThriftBooks® logo are registered trademarks of Thrift Books Global, LLC