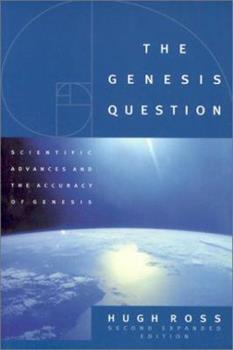 The Genesis Question: Scientific Advances and the Accuracy of Genesis

"Everyone knows the Bible teaches scientific nonsense" is a commonly held misconception. When pushed for examples, many point Genesis 1-11. In this book, Dr. High Ross shows how those very chapters hold some of the strongest scientific evidence for the Bible's supernatural accuracy thus reinforcing its reliability as the authoritative Word of God. "The Genesis Question" takes up the challenge in an intelligent and scientifically accurate response...

Published by Justin , 1 year ago
The author subscribes to the idea that God did not make the earth is 6 consecutive days. But, 6 consecutive "time periods" or "eras" to satisfy the scientific data of the Earth's age, without disputing the Book of Genesis. He writes that the Hebrew word "yôm" can be interpreted as one day(aprox. 12 hrs of daylight), one 24hr day, or a certain amount of time. I am taught, and believe, that God made everything in 6 consecutive 24hr days. I belive the writer of Genesis is clear on this. On day one How old were Adam and Eve? How many rings did the trees have? Point being, when God created things, he created them with age.

Published by Thriftbooks.com User , 17 years ago
Dr. Ross' explanation of the Genesis creation account is the most reasonable around. Add to this the fact that the science matches the account and ones has a compelling argument for the divine inspiration of Genesis. As a former atheist and well educated person, I recommend this book more than any other to those looking to understand the intersection of science and the Bible. Dr. Ross explains how to correctly exegete Genesis chapter 1 by noting the frame of reference of the author. Using this he explains why light was created before the sun. He points out differences in the different hebrew words used in the Genesis account that mean 'create'. This understanding is crucial to figuring out the creation account. As a person who for years studied science in the search for truth, I found this book to be most helpful- and it leads to a belief in Christianity.

Scientists and creationists, put away the buggy whips!

Published by Thriftbooks.com User , 17 years ago
Dr. Ross's book shows that Moses anticipated the findings of modern science. Scientists are only now realizing that the universe was created a finite time ago. It is not infinitely old. So you don't have to check your brains at the door to be a devout Christian, Jew or Muslim. On the contrary, you have a head start!

Intelligent harmonization of Genesis and science

Published by Thriftbooks.com User , 17 years ago
Dr. Ross' careful and nuanced book is a joy to read! He uses an old-earth framework to demonstrate the accuracy of Genesis, in a thorough and systematic way I have not seen from other authors. Of course, this book is not appreciated by young earth creationists, as many of the reviews below attest. I think most young earth creationists are sincere, though misguided. The church embarrassed itself once before, rejecting Copernicus and Galileo based upon an overly-literal interpretation of Joshua 10 and other passages stating that the sun moves across the sky. We should be careful not to make the same mistake a second time. The Bible is divinely inspired and without error. But that does not mean that every word and phrase should be read literally. For example, the Scriptures say that God is a "rock." But no one believes that He is a finite, inanimate piece of stone. That is figurative language. But it dramatically and accurately conveys something about God's protection that literal language could not convey. Moses was not a scientist. The ancient Israelites did not think in scientific categories. So we should not expect Genesis to use a literal, scientific framework. The use of "days" more accurately conveys, from God's perspective, the relative importance of His creative activity. On the other hand, for those who prefer to read the creation days as literal 24-hour days, you have an ally in Albert Einstein. According to his theory of relativity, the speed of time depends upon the speed of the object. For objects close to the speed of light, the universe may be only weeks, days or even hours old. Physicist Gerald Schroeder calculates that the universe is literally 7 days old, when measured from the edge of the expanding universe. See his book Genesis and the Big Bang (Bantam 1990).

Published by Thriftbooks.com User , 18 years ago
I was brought to faith in Christ through the teachings of Henry Morris' "The Genesis Record" - a book that explained a theory in how science and the Bible are not enemies. I had some remaining questions about how much of secular science could be wrong (e.g., Big Bang theory, age of fossils, etc.) but enthusiastically embraced the Young Earth position. While in seminary I was challenged to understand the various positions on theological topics such as age of the earth. I picked up a copy of "The Genesis Question" wanting to understand the Old Earth argument from their own mouths, although at the time I was confident that Old Earthers were demonically influenced and Hugh Ross was a goat not a sheep (this was what I was taught by my Young Earth friends). After reading chapter one, I began thinking "this guy is making a lot of sense." But I was scared that I would have to abandon my belief in the Bible to accept anything other than a 6,000 year old earth. Ross showed me how I could still believe in a literal interpreation of Genesis, a literal Adam and Eve, still believe the Bible was the inerrant, inspired Word of God AND believe in a 15 billion year old universe. For anyone interesting in learning how you don't have to check your scientific brain at the door to believe in the Bible I encourage you to check out this book!

Published by Thriftbooks.com User , 22 years ago
I needed this book thirty years ago, when my attempts as a young man to make arguments like those in this book met blank stares and offers to "pray with me for healing" from members of my church--with the result that I left that church. I grew up in Escondido, California, with one foot in fundamentalist Christianity and the other in the geological sciences. I hope--for their sake--that today's members of that church are more open to Dr. Ross' arguments than their parents were to mine.
Trustpilot
Copyright © 2022 Thriftbooks.com Terms of Use | Privacy Policy | Do Not Sell or Share My Personal Information | Accessibility Statement
ThriftBooks® and the ThriftBooks® logo are registered trademarks of Thrift Books Global, LLC