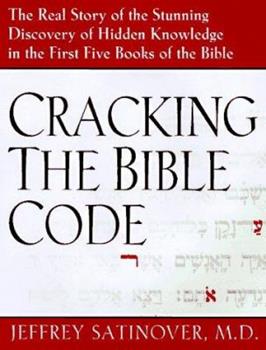 Analyzes encoded information in the first five books of the Bible, discussing how the codes were discovered and the historical efforts to preserve, interpret, and authenticate them.

Published by Thriftbooks.com User , 19 years ago
I picked up a number of these bible code books after reading "Conquest of Paradise", a fictional account of the end times and the prophecies from the Bible. This is far superior to any other that I've read. "Cracking the Bible Code" is concise and elegantly written. You won't find the hype associated with other books, just facts and rational reasoning. This is a must read for both Bible scholar and skeptic alike. It provides tremendous amounts of research, great discussion, relevant stories, and ample references. It's far better than the original "Bible Code" by Michael Drosnin. I suggest readers avoid that and pick up "Conquest of Paradise" and "Cracking the Bible Code" instead. Both books will have a profound effect on your worldview long after you've read them.

A Jewish and Christian Odyssey

Published by Thriftbooks.com User , 21 years ago
When I purchased this book and began to read it, I did so thinking that it would be a somewhat intriguing diversion from all the ugliness of the atrocities of Sept. 11 and their aftermath. But I doubted that it was anything that I should take seriously. I have been a Christian for many years, and have heard all kinds of theories regarding Biblical interpretation, from numerology to non-Christian mysticism. So I wasn't quite sure what I should expect from this book. The topic of hidden Biblical codes was mildly interesting to me, but somehow - out there; the stuff of pseudo science, pseudo religion and Fox Molder."Cracking the Bible Code" surprised me in that it does not sensationalize or subjectively promote its topic. Rather, it begins by telling a series of biographical stories that illustrate the long and rich history of the Jews and their devotion to the Torah both as Holy Scripture, and as God's Puzzle to be pieced together by the faithful. Eventually, these stories include the development of modern day encryption/decription technology, and the application of some of this technology to continue the ancient pursuit of hidden mysteries of the Torah. The results are astounding.As a Christian, I believe that science and the theology are investigating the same mystery. The two are at once compatible but divergent. The more scientific information we gather, the more we learn of the act of creation, and even of the mind of God. "Cracking the Bible Code" follows this theme, but perhaps leaves the reader with more wonder than answers. Dr. Satinover seems especially aware of the temptation for the Jewish and Christian believer to loose objectivity with regard to this subject, and strives to stay focused on the facts (as he sees them) and present to the reader a 4000 year old drama that has yet to be finished.

Published by Thriftbooks.com User , 21 years ago
There have been several recent books concerning the potentially life-altering phenomenon, The Bible Code. The most widely known text, by Michael Drosnin, seems to be a highly drawn upon source of information. This is unfortunate, as it is written with such narrow scope and understanding, it leaves one feeling as if he has just stepped out of a $60 million special effects picture, entertained but not enlightened, not inspired. Cracking The Bible Code by Jeffrey Satinover, on the other hand, is written with the care and skill deserving of such complex and subtle material. A wonderfully thought out book that certainly explains the codes and their mind boggling implications, but also goes a step deeper, using a devastating combination of history and hard science relating to the math behind the codes, as well as the Torah (the first five books of the Bible) and the Jews themselves. A very passionate mix. There is no doubt Satinover is sympathetic to the cause... However, unlike the aforementioned "pop" text by Drosnin, Cracking the Bible Code attempts (and succeeds) to do nothing more than this: Provide enough framework to warrant further exploration into the legitimacy of the Codes. This exploration would be intended not to "see into the future" as Drosnin strongly suggests, but rather to reveal an undeniable watermark: God's authorship. Religious or not, Jewish or not, this is powerful stuff.

A Most Thorough, Objective Analysis of The Code Phenomenon

Published by Thriftbooks.com User , 23 years ago
This book is simply excellent. As a Christian always seeking more biblical insight, I came away from this read with numerous and invaluable insights into (1) the history of Judaeism (which is pivotal for Jews and Christians alike); the intriguing field of quantum physics; the origins of the computer; and the role cryptology played in ending WWII. Beside the "bonus" history lesson it provides, the joy in reading "Cracking the Bible Code" comes from the author's care in avoiding subjective conclusions that could otherwise provide fodder for skeptics. Rather, Dr. Satinover merely reports the facts as he knows them, based on an impressive body of research. Of course, like any other communique, one can feel that the author does side with one point of view over the other, in the debate. So what. As I said, unlike numerous other writers on the subject, Dr. Satinover takes great pains NOT to "purport" much of anything. Again, this a just a tremendous book that I recommend to anyone and everyone. It is an exercise of the mind and the spirit. As an aside, that Michael Drosnin's book on the same subject became a New York Times Best Seller, despite its sensationalist, baseless, and shallow nature, pretty much sums up the character and intellect of our society today. I hate to reveal my cynisism, but I would not be surprised if Drosnan's book was deliberately publicized by the atheist elite who virtually control the direction of debate in our country today. To anyone who enjoys reading, please read "Cracking the Bible Code", by Jeffrey Satinover.

An enlightened treatment of a lightning topic.

Published by Thriftbooks.com User , 25 years ago
QUESTION: Which one of the following terms describes people's reactions to the discovery of the Bible codes? Amazing, astonishing, incredulous, questionable, impossible, puzzling, stunning, astounding, baffling, weird, implausible, curious, exciting. ANSWER: All of the above. Incidentally, these same words could be used to describe the reactions of people to miraculous happenings in Bible times, both Old Testament and New Testament. QUESTION: Which one of the following words describes the contents of Dr. Satinover's new book, Cracking the Bible Code? Mystical, psychological, statistical, philosophical, archaeological, technical, autobiographical, probable, theological, anecdotal, historical, fuzzy. ANSWER: All of the above. QUESTION: How would you compare and contrast the books by Michael Drosnin (The Bible Code) and Jeffrey Satinover (Cracking the Bible Code)? ANSWER: In comparison, (1) both authors think the Bible code is real. (2) Both men have helpful Jewish roots and connections. (3) Both are gifted writers. (4) Both aimed their books at a general readership. (5) Both ignore or discount the research of Christian codes' enthusiasts. (6) Both think that only the surface has been scratched by current scientific research and that there is more to come, particularly from the disciplines of quantum physics and quantum cryptology. In contrast, (1) Drosnin's book is sensational, the work of a journalist; Satinover's book is reasonable, the work of a scientist. (2) Drosnin says Bible codes are like crossword puzzles; Satinover says they are like cryptograms. (3) Paradoxically, Drosnin is both secular and Biblically apocalyptic; Satinover is both religious and scientifically restrained. (4) I had to keep my Bible concordance at hand while reading Drosnin; I had to keep my Webster's dictionary at hand while reading Satinover. (5) Drosnin preaches, prophesies, and warns; Satinover teaches, explains, and enlightens. (6) Drosnin says that Bible codes are not God's doing; Satinover says that Bible codes are a divine fingerprint, God's watermark, on the Torah scrolls.
Trustpilot
Copyright © 2022 Thriftbooks.com Terms of Use | Privacy Policy | Do Not Sell or Share My Personal Information | Accessibility Statement
ThriftBooks® and the ThriftBooks® logo are registered trademarks of Thrift Books Global, LLC