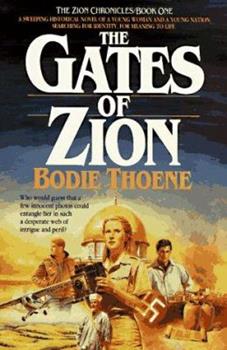 The Gates of Zion

(Book #1 in the Zion Chronicles Series)

by Bodie Thoene and Brock Thoene

The Zion Chronicles series covers the events surrounding Israel's statehood in 1948. Each book vividly portrays the intense struggle of the Jewish people in the aftermath of the Holocaust and the... This description may be from another edition of this product.

This Book Has It All

Published by Thriftbooks.com User , 21 years ago
Action, intrigue, romance! This book has it all. Ellie Warne, a young American photographer suddenly finds herself thrust into the role of photojournalist for "Life" magazine, covering the turmoil between the Jews, Arabs and British in 1947 Palestine.Throw in the mix an assortment of characters, including the brave Moshe and David, who vie for Ellie's attention, as well as Rachel, a beautiful Jewess who had been forced into prostitution in Auschwitz during World War II and you have people you can be interested in. Bodie Thoene can excellently craft a novel and turn a phrase and she definitely has done it in this book!

5 stars isn't enough. I was captivated!!!

Published by Thriftbooks.com User , 23 years ago
Never have I come across a better author. Bodie Theone (tay-nee) is truly amazing. These books are full of drama. It's like the characters became my friends. When I finished the series, It felt as though I lost some good friends. I really don't know if I could be as entertained, enlightened and fulfilled by reading anything else after reading this series. Originally I was checking the series out one at a time from the library. But when I realized I'd finally found something I couldn't put down, I figured I better buy the whole series. I have never bought books before, because I've never found anything worthy of being read more than once. I was just so compelled and I want to share her writings with all my friends and family. She's spectacular. So is anything written by her husband Brock, who helps her co-write everything. It's almost like watching a movie, because there are so many plots intertwined. I was shocked to read the epilogue in RETURN TO ZION. You'll have to find out for yourself. Just don't start reading in the middle of the series. If I could never read another authors works but one it would be the Theone's. - Megan Villa

Published by Thriftbooks.com User , 23 years ago
I picked the first one up at my local library, and had to have more. If you like adventure, a little romance, and great historical fiction, this is it. It grabs your attention, immerses you in the characters, and lights a sympathy for the events. Get the whole series, they're great!

Published by Thriftbooks.com User , 24 years ago
This book was very powerful! The stories were taken mostly from actual events that took place post WWII in Palestine and Jerusalem. A must read book!

Published by Thriftbooks.com User , 25 years ago
I've always enjoyed Christian fiction, particularly historical Christian fiction, but this book has me hooked on Bodie Thoene. She presents her characters in such a real way that I cried when I finished the series, because I wouldn't see the characters again.Also, this book, and the series in general, has given me a very real appreciation for Israel's struggle for peace and recognition. It's taught me to value the freedom I have. Reading about those who will stand up for what they believe in, at any cost, and those who will stand up for others, has left me with the desire to do likewise.If you like Bodie Thoene, or even if you have never read any of her books but enjoy historical fiction, give this book a try. I was so hooked I finished all five books in the Zion Chronicles and the three books in the Shiloh Legacy in six months, in spite of college studies
Trustpilot
Copyright © 2022 Thriftbooks.com Terms of Use | Privacy Policy | Do Not Sell My Personal Information | Cookie Preferences | Accessibility Statement
ThriftBooks® and the ThriftBooks® logo are registered trademarks of Thrift Books Global, LLC