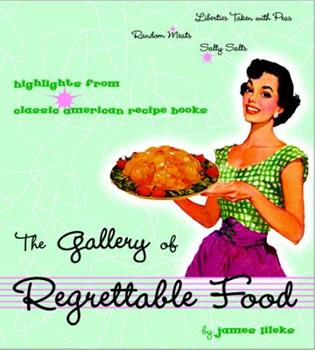 WARNING: This is not a cookbook. You'll find no tongue-tempting treats within -- unless, of course, you consider Boiled Cow Elbow with Plaid Sauce to be your idea of a tasty meal. No, The Gallery of Regrettable Food is a public service. Learn to identify these dishes. Learn to regard shivering liver molds with suspicion. Learn why curries are a Communist plot to undermine decent, honest American spices. Learn to heed the advice of stern, fictional...

Published by Thriftbooks.com User , 18 years ago
When James Lileks unearthed an old recipe pamphlet from the back of his Mom's closet and viewed the culinary nightmares within, he made it his life's work to discover other such cookbooks and food company ads from the 40s, 50s, and 60s. The results of his tireless research are now brought together for your amusement and indigestion in "The Gallery of Regrettable Food."Through photos and witty commentary, Lileks displays some of the most unappealing foods and recipes I have ever seen, and he does it with flair. Whether using the recipe names from the original cookbooks, with such labels as "pepper pups" and "liver spoon cakes," or providing his own descriptive phrases like "cross section of the Swamp Thing's brain" or "grubworms and lawnmower clippings," he kept me laughing. He presents a parade of incompatible foods thrown together into gastronomic horrors, such as peppers baked and stuffed with creamy marshmallow sauce, frankfurters in aspic, or tongue mousse. The photos illustrate a parade of dishes that are unidentifiable at best and nauseating at worst. There are pictures of gray, fat-shrouded mystery meats, objects drowned in cream sauce, and gelatin molds with bizarre foods suspended within. The pamphlets produced by food companies urge us to cook everything using their products, whether 7UP or ketchup - and I mean everything! I could go on and on about the gems here, but I don't want to spoil your appetite for dinner.This book also provides a look at the days when advertisers depicted homemakers in dresses, pearls, and frilly aprons when serving meals to the family. This was the era when cholesterol and sodium were not yet flagged as health hazards, and where salmon usually came out of a can. It was a time when families at the dinner table were idealized and stereotyped to the extreme. Through a recipe booklet produced by Spry shortening and its spokesperson Aunt Jenny, we learn that a new bride's biggest worry is whether her biscuits are up to snuff or not. We learn that cooking man-pleasing meals is of the utmost importance to the homemaker. The only cooking a man does in this world is when he dons the barbecue apron and grills a steak. I recommend this as a great gift for anyone who loves collecting cookbooks or who enjoys a humorous look back at the good old days.Eileen Rieback

The Little Book of Gastronomic Nightmares!

Published by Thriftbooks.com User , 18 years ago
Columnist James Lileks has hit a home run with this pungent assemblage of comestible horrors. Noted for his amusing website (www.lileks.com), the author has been collecting humorous bits of Americana for a while, and this is essentially the greatest hits of horrifying food that he has thus far uncovered. The book is very tongue in cheek and profusely illustrated with recipes for and photographs of hideous and disgusting real recipes that somebody thought were a good idea at the time, but in retrospect seem amazingly daft. The book is divided into chapters largely by food type ("Poultry for the Glum", "All the Smart People Eat Toast", "Glop in a Pot!", etc.) but there a couple organized more by genre ("Swanson's Parade of Lost Identity", "Eat Brains and Whip Hitler!", etc.) All told there are 192 pages of revolting and hilarious monstrosities of the kitchen. Most are descriptions and photos of the dishes, while some include the actual recipes. I actually wish more of the recipes were included, as I can't imagine what ingredients make up some of these dishes, the sardine dish on p. 76, for instance, the appearance of which is accurately described as "piscine torsos in a vinyl sauce colored with melted peach crayons." Some of the recipes, on the other hand, find the reader wishing they knew a bit less about the contents of the dish, for instance on p. 31 under the heading 'Aspic Entrees', the recipes for "Tongue Mousse" and "Jellied Calf's Liver" spring to mind readily. This book is a wonderful addition to any library; I plan on putting mine among my cookbooks for easy future reference! Highly recommended!

Published by Thriftbooks.com User , 19 years ago
In this book, James Lileks takes his readers back to a time when moms looked like June Cleaver and meals of creamed brains on toast were perfectly acceptable. Really - he's got the pictures to prove it!Lileks was inspired to create The Gallery of Regrettable Food after a trip back to his parents' home in Fargo, North Dakota. That's where he found Specialties of the House, a cookbook that his mom had gotten from the Welcome Wagon when they moved into the house in the early 60s. The book contained all kinds of horrifying pictures that looked very little like edible dishes - but a lot like something out of a horror film. Lileks then began creating the Gallery online... and eventually turned it into a big, disturbing book.The Gallery of Regrettable Food is 200 pages of absolutely disgusting pictures (taken straight from the cookbooks of the 30s through the 70s) - along with Lileks's crude commentary. It definitely makes me want to take a closer look at my mom's cookbook collection.This book is absolutely pants-wetting-ly hilarious. Every once in a while, I'd read it during the evening, and I'd start making a sound that can best be described as a mix between laughing and gagging - and my husband would continually ask if I was okay. I have a few tips for reading this book, though. First, don't read it all at once. I believe it could do permanent damage. Second, don't read it anywhere near mealtime. Read it before you eat, and you'll lose your appetite (note: it could, however, be used as a diet aid). Read it after you eat, and, well... never mind. Third, don't read it before bed. It will create nightmares unlike anything you've ever experienced. And, finally, whatever you do, don't try this at home!

Give it a read, then give it to your Web-challenged friends

Published by Thriftbooks.com User , 21 years ago
While most of the material in this volume can be found on the Lileks Web site, this book is just too good to pass up! Mr. Lileks passion for rehashing some of the worst of mid-century pop culture results in brilliant humour. Though I grew up in the 70's, I recall seeing cookbooks very similar to these in our family library, and I thank God my parents did not use them.The sheer volume of the material presented (and the cookbooks are just the tip of the iceberg on the Lileks website) would lead one to believe that people in the 30's - 60's had absolutely no (or bad) taste and were motivated by an entirely commercial culture. While the Gallery of Regrettable Food is funny in the extreme, once you've finished reading it and brushed the tears of laughter from your cheeks it's also interesting to contrast the (perhaps unjust) impression of an advertisement driven mid-20th century to the reality of today's highly commercialized society.Even if you are already familiar with Lileks' Web site, I recommend this book because it will look great on your coffee table, and it may be the only way your Web-challenged friends (read: your parents) will be able to enjoy this outstanding brand of humour.

Published by Thriftbooks.com User , 21 years ago
This is not a cookbook. If you cook from this book you should be shot, for indeed, that would be more merciful than eating the meal. But the truth is, thousands of moms in the 1950s and 1960s *did* cook from the cookbooks that James Lileks so hilariously skewers in "The Gallery of Regrettable Food," and if you ever remember your mom proudly plopping down a new recipe that had dad and the kids staring at each other in disbelief, then this book is for you."The Gallery of Regrettable Food" does for the cookbooks of yesteryear what the robots from "Mystery Science Theater 3000" do for bad movies. And hoo boy, is this *bad* food...bloated with lard, tasteless, shiny, and topped with some kind of sauce that you swear must be made from radioactive by-products. These "classic" dishes are shown in photos from the original cookbook, photographed in their various original shades of gray, mauve, and pink--just looking at this requires a strong stomach, and Lileks is to be commended for having the nerve to page through them all.But most of all, Lileks is hilarious--his caustic commentary pulls no punches ("This is a meal. It is also a scene from "The Andromeda Strain." "Satan himself could not invent so fiendish a dish.") and he spares no sarcasm in his horror and contempt for the way America was "supposed" to cook. ("This is some of the most tortured, attenuated garnish a steak has ever had; it looks as if El Greco had attempted to paint the mask from the "Scream" movies.") and most of all, the bizarre and disturbing oddities of "classic" cookbooks (Why the Sam Hill is that cartoon chicken FRYING UP A CHICKEN LEG?!?!). The hilariously dated and macabre cookbooks include such "classics" as "You're Really Cooking When You're Cooking With Seven-Up!," "Cooking for a Man: Tested Recipes to Please Him!," and the infamous "How Famous Chefs Use Campfire Marshmallows." (Answer: to slap on any kind of dish from toast to (urp!) peppers.)Buy it for your mom for Christmas...and be prepared to have her take down her hilarious collection of bad 1960s cookbooks to show around. Just, for God's sake, don't ever, *ever* let her cook from them.

The Gallery of Regrettable Food Mentions in Our Blog 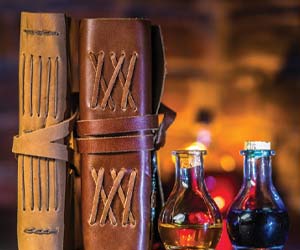 A Historical Look at Life Hacks
Published by William Shelton • May 22, 2022
Tips, tricks, and shortcuts to improving the quality of life have been peddled for centuries, long before we began calling them "life hacks." From hog-killing, log rolling, syrup making, spell casting, fine dining, and keeping your skin movie-star perfect, there has always been a life hack book on the market to meet your needs.
Read Article
Trustpilot
Copyright © 2022 Thriftbooks.com Terms of Use | Privacy Policy | Do Not Sell My Personal Information | Cookie Preferences | Accessibility Statement
ThriftBooks® and the ThriftBooks® logo are registered trademarks of Thrift Books Global, LLC