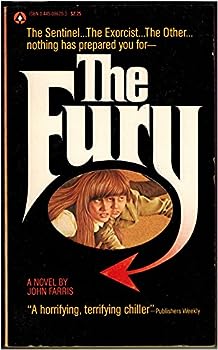 The fury: A novel

This description may be from another edition of this product. Gillian Bellaver's family is one of the wealthiest in the world. Robin Sandza's father Peter is a government assassin. The two teenagers seem to have nothing in common. Yet they are spiritual twins,...

Published by Thriftbooks.com User , 15 years ago
What possessed John Farris to write, in 1976, such an avant-garde no holds barred of a novel, we will never know. But one thing's for sure, his FURY is one heck of a roller coaster ride. From the get go, the novel screams of ingeniuty, whether it's in its pre-Koontz-like subject (Gouverment propaganda behind "gifted" subjects), its dead-on characterization or in its dynamic and assured pace. The author's skills as a writer shine through and through, up to the edge-of-your seat conclusion that leaves the reader literally breathless. Be prepared to applaud the man, for THE FURY certainly deserves all of its success.-----Martin Boucher

Published by Thriftbooks.com User , 19 years ago
John Farris' breakthrough bestseller holds up well, after all these years. It spawned a minor cottage industry in the film business, especially, with the "evil government psychic projects" plot. Scanners and Firestarter, and their numerous clones and offspring, were inspired by this piece. It was ahead of its time in discussing then-unknown true-life psychic spying programs, which have since been written about in quite some detail - though discussing nothing quite like what happens in this book.Robin and Gillian are twins separated at pre-birth, reincarnated souls meant to grow up together who instead are growing up separately. Robin is the more powerful of the two, and comes to the attention of MORG, a nefarious super-secret government agency that attempts to murder Robin's CIA assassin father in order to more fully take Robin under their wing. Robin's father is mighty ticked-off about all this, and wages a private little mini-war with MORG head Childermass to get his son back. In the meantime, promising newcomer Gillian has also come to MORG's attention - and Robin's father's, as well, who wants to use her to locate his sequestered son.Definitely one of Farris' best. Even though Farris also wrote the screenplay to the stylish Brian DePalma movie, the film is weak compared to its original source material.

Published by Thriftbooks.com User , 21 years ago
5 Turning fifteen, New Yorker Gillian Bellaver possesses a rare talent. She can convert psychic energy into a powerful, destructive force that she struggles to restrain. Teenager Robin Sandaz also contains the same power. The Feds, several foreign governments, and other wealthy interests share in common the desire to control Gillian, Robin, and similar talents for purposes of exploiting their respective powers mostly as weapons. Robin's father, Peter is one of the US government's most dangerous and successful assassins, but feels it is time to retire. The sanguinary Middle East has been his most frequent playground, but a recent personal incident has returned him to America. Peter worries that he may be too late to save his son from the brain washing happening to Robin back in the States. Peter plans to attempt to free Robin and the other "student"-prisoners from their captivity before they become inhuman pawns deadlier than any known terrorist in the world today. Failure means death while success means being on the lam perhaps forever. It has been twenty-five years since John Farris released THE FURY, but the book is being re-released in anticipation of Mr. Farris' sequel. I feel like the star of Steely Dan's "Hey Nineteen" that I read so long ago and just reread yesterday. The original retains all the freshness that made it a best seller as the look inside the unused segments of the mind seems even more relevant in this age of rapid medical achievements. This reviewer strongly recommends reading the novel followed by the De Palma's movie because both are excellent.Harriet Klausner

Published by Thriftbooks.com User , 21 years ago
John Farris hasn't gotten much recognition as a horror writer. This is the only book of his I've read, but if the rest are nearly as good as this one then he's one of the least recognized writers out there. There are quite a few things that set this book apart from the conventional horror novel, and these are the things that make this book truly horrifying. It is an extremely dense book and seems longer than its 400 page length, although it never drags. Its chock-full of intertwining characters and plot elements with lots of shocking twists. Farris isn't afraid to make us care about his characters and then subject them to horrible fates. The author's treatment of the book's main character, Peter Sandza, is especially chilling. So are the unwilling results of Gillian's special ability. The depiction of the government officials and the character Childress are quite menacing. The true relationship between Gillian and Sandza'a son is at once beautiful and unsettling. The watchable Brian De Palma film starring Kirk Douglas only scratches the surface of this solid thriller which accomplishes what few horror novels ever do: leave the reader both horrified and satisfied. If you can find this book anywhere read it at once!

Published by Thriftbooks.com User , 22 years ago
This book blew me away, I haven't read a good book in a while but this griped me. I was sad to finish it
Copyright © 2020 Thriftbooks.com Terms of Use | Privacy Policy | Do Not Sell My Personal Information | Accessibility Statement
ThriftBooks® and the ThriftBooks® logo are registered trademarks of Thrift Books Global, LLC