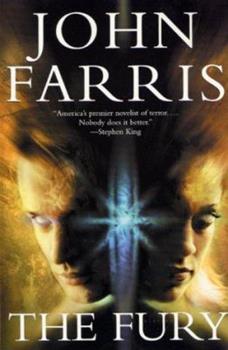 Gillian Bellaver is from one of the wealthiest and most powerful families in the world. Robin Sandza's father, Peter, is one of the United States government's deadliest assassins. Gillian and Robin are from two different worlds. Outside they have nothing in common. Yet they are spiritual twins, possessors of a horrifying psychic energy that threatens humanity. While dangerous and fanatical men vie for the secrets of their awesome power, Peter Sandza,...

Published by Thriftbooks.com User , 15 years ago
What possessed John Farris to write, in 1976, such an avant-garde no holds barred of a novel, we will never know. But one thing's for sure, his FURY is one heck of a roller coaster ride. From the get go, the novel screams of ingeniuty, whether it's in its pre-Koontz-like subject (Gouverment propaganda behind "gifted" subjects), its dead-on characterization or in its dynamic and assured pace. The author's skills as a writer shine through and through, up to the edge-of-your seat conclusion that leaves the reader literally breathless. Be prepared to applaud the man, for THE FURY certainly deserves all of its success.-----Martin Boucher

A FANTASTIC SEQUEL TO A CLASSIC BESTSELLER!!!

Published by Thriftbooks.com User , 18 years ago
It's taken John Farris over twenty-five years to finally write a sequel to his most famous novel, THE FURY, and I'm happy to say that it was well worth the wait. THE FURY AND THE TERROR takes up twenty years later where its predecessor left off. Gillian Bellaver has been dead for over a year, having been murdered by a team of assassins in front of her husband, Tom Sherard. Robin Sandza has been in a coma-like state for two decades-his body housed in the ultra-secret MORG facility in Montana-while his twin body (or doppelganger), using the name of Victor Wilding, now runs MORG with the help of Rona Harvester, who's married to the President of the United States. The story starts out with a commando raid on a Hawaii compound that's led by the First Lady. The mission of the raid is to capture of Kelanie Cheng, whose psychic abilities are so strong that she's considered to be what's known as an avatar. After the raid is successfully completed, Rona Harvester decides to remain in Hawaii for an extra day, while Kelanie is heavily drugged and then flown to the MORG facility, guarded by the team of commandoes. The plane, however, never makes it to Montana. Kelanie uses her power to divert the aircraft to northern California where it crashes into a stadium during a college graduation ceremony. Eden Waring is in the process of giving the valedictory address at the ceremony when the tragedy occurs, and it's only because of her own psychic ability that the several thousand people in the stands aren't killed when the airplane crashes and then explores. This immediately draws national attention to Eden and what she did. It also draws the attention of MORG and Rona Harvester. It isn't long before Eden's hidden identity is discovered. She's the daughter of Gillian Bellaver and Peter Sandza (Robin's father), and her psychic powers are stronger than anyone can imagine. Everybody now wants her either dead or alive, and will do whatever it takes to accomplish this vital task. Eden's grandmother (Katherine Bellaver) sends Tom Sherard to save her-a man who's known danger in a thousand different ways and is prepared to put his own life on the line to save the daughter of his late wife. Even with the help of many close and powerful friends, Tom may not be able to do the impossible because there's more at stake here than just the life of one young girl-the entire country may be on the brink of a nuclear disaster. Understand that this brief description of the storyline is only the tip of the iceberg for THE FURY AND THE TERROR. John Farris has managed to intertwine a dozen different subplots into the novel that almost boggles the reader's mind. At the crux of the story, however, is Rona Harvester's conspiracy to murder her invalided husband with the help of her lover, Victory Wilding, and to take over the Presidency. Once Kelanie Cheng is killed in the plane crash, however, Rona has to turn to Eden Waring, hoping that she might be able to help heal Robi

Farris is back with a vengeance

Published by Thriftbooks.com User , 20 years ago
John Farris' 1976 novel "The Fury" and the 1978 Brian de Palma film version have always been favorites of mine. Now Farris has returned to this world of nefarious secret government agencies and young renegade psychics with a new novel that takes place approximately 20 years after the previous installment. Eden Waring's college valedictorian address starts off well, but veers away from platitudes about the rosy future of her peers into a warning to RUN FOR YOUR LIVES, because she's had a premonition that a plane is about to crash in the very stadium in which thousands are gathered on grad day. Who's in the plane, why it's crashing, and Eden's adventures from that harrowing moment on form the substance of a great horror-suspense-espionage-good vs. evil extravaganza that starts at breathtaking speed and doesn't let up till the last page. John Farris has lost none of his trademark skills -- he's an economical yet extremely deft writer whose imagination runs as wild as a runaway train, pulling the reader helplessly and happily along. The twists and turns come at a relentless pace, involving cross-dressing assassins, shapeshifters, not-a-moment-to-lose pursuits, nuclear catastrophes, and more. Popular entertainment is rarely as entertaining as this. Best news? Another installment is forthcoming!

Farris deserves to be huge...this book should do it.

Published by Thriftbooks.com User , 20 years ago
I'll leave a plot synopsis for other reviews. Whether you're familiar with The Fury or not, this book stands on its own as a literary masterpiece. It's a perfect example of good storytelling, plain and simple. John Farris has been writing for more than 30 years and The Fury and the Terror is a prime example of a man who has mastered his craft. For those who read Stephen King and Thomas Harris, discover one of the originators of the genre...

Published by Thriftbooks.com User , 21 years ago
5 Turning fifteen, New Yorker Gillian Bellaver possesses a rare talent. She can convert psychic energy into a powerful, destructive force that she struggles to restrain. Teenager Robin Sandaz also contains the same power. The Feds, several foreign governments, and other wealthy interests share in common the desire to control Gillian, Robin, and similar talents for purposes of exploiting their respective powers mostly as weapons. Robin's father, Peter is one of the US government's most dangerous and successful assassins, but feels it is time to retire. The sanguinary Middle East has been his most frequent playground, but a recent personal incident has returned him to America. Peter worries that he may be too late to save his son from the brain washing happening to Robin back in the States. Peter plans to attempt to free Robin and the other "student"-prisoners from their captivity before they become inhuman pawns deadlier than any known terrorist in the world today. Failure means death while success means being on the lam perhaps forever. It has been twenty-five years since John Farris released THE FURY, but the book is being re-released in anticipation of Mr. Farris' sequel. I feel like the star of Steely Dan's "Hey Nineteen" that I read so long ago and just reread yesterday. The original retains all the freshness that made it a best seller as the look inside the unused segments of the mind seems even more relevant in this age of rapid medical achievements. This reviewer strongly recommends reading the novel followed by the De Palma's movie because both are excellent.Harriet Klausner
Copyright © 2020 Thriftbooks.com Terms of Use | Privacy Policy | Do Not Sell My Personal Information | Accessibility Statement
ThriftBooks® and the ThriftBooks® logo are registered trademarks of Thrift Books Global, LLC