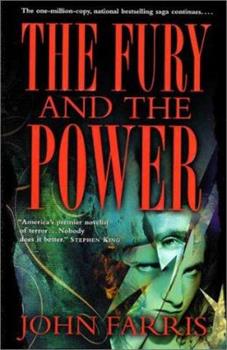 The Fury and the Power

Eden Waring is an Avatar, a talented young psychic with the ability to produce at will her doppelganger - her mirror image, who calls herself Gwen and possesses remarkable powers beyond even Eden's. Gwen can become invisible to mortal eyes and can travel back and forth in time. As gifted as Eden and Gwen are, there is a stronger entity that stalks them, coveting Gwen's unique talents. Mordant, the Dark Side of God, is both ageless and deadly, so evil...

The Amazing Talent of John Farris

Published by Thriftbooks.com User , 13 years ago
It always amazes me that not more people know the work of John Farris and not more people feel the need to write reviews about his books. The Power and the Fury being a case in point. This rip-roaring tale of psychic avatar Eden Waring starts with a great bloody scene in church and doesn't let up until the end of the book. The characters are wonderful guides through a story that twists and turns like a serpent. It is obvious that Farris loves to tell a great story and lucky for us is that he has the talent and a sharp and very clever mind to give us more than what we can ask for for a great thriller. John Farris has been and is still one of the best horror and thriller writers since the late nineteen fifties. Sadly most of his titles are out of print, but I guess this makes finding one of his books an even more pleasure experience. This upcoming may the fourth and final installment of The Fury series will be published. I for one am looking forward to it. Thank you Mr. Farris for giving us so much scary and thrilling entertainment.

Published by Thriftbooks.com User , 18 years ago
She is not ordinary woman in any sense of the world. She is a powerful psychic who can call forth her doppelganger at any time she chooses, an entity equal in power to Eden Waring. She defused a bomb by using her powers but that doesn't make her a safe or happy person. The Assassin of the Impact Sector of the FBI tried to kill her once but failed and he's back for a second shot.That is not the worst danger she faces because, after all, the Assassin is only a mundane psychopath. She has attracted the attention of Mordant, an evil being from another plane, who has lost part of his soul. He hopes to use Eden to find it so he can plunge the world into chaos. He also wants to mate with her so that the child they will produce will be quite the fury. Eden wants no part of the evil Mordant and will fight him with her last breath before she gives him any victory over her.THE FURY AND THE POWER is a pulse pounding work of psychological suspense and chilling horror. Eden is a young woman who must cope with her own powers and otherworldly beings without succumbing to their dark side. There are many violent scenes in this book but they are appropriate in the context of the story line. The sequel promises to be even better but readers will have to wait something that will prove a very difficult task.Harriet Klausner
Copyright © 2020 Thriftbooks.com Terms of Use | Privacy Policy | Do Not Sell My Personal Information | Accessibility Statement
ThriftBooks® and the ThriftBooks® logo are registered trademarks of Thrift Books Global, LLC