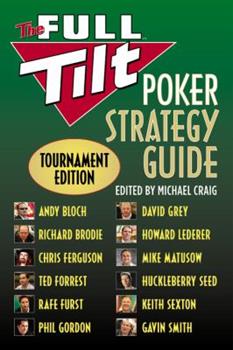 The professionals of Full Tilt Poker include the best and most famous poker players in the world. Their accomplishments are unparalleled, with countless World Series of Poker and World Poker Tour championships to their names and well in excess of $100 million in winnings in private games. Now, this group of poker legends has banded together to create The Full Tilt Poker Strategy Guide , which will stand as an instant classic of the genre and is sure...

Published by Thriftbooks.com User , 14 years ago
Like others, I was a bit skeptical seeing the Full Tilt logo, thinking the book could be promotional in nature. But the amount of quality material here is excellent. The book is geared primarily toward no-limit tournies, although the Huck-Forrest Razz chapter is a particular highlight due its highly user-friendly dialogue format. C. Ferguson's post-flop chapter is a must-read, and I like that he begins by analyzing the purpose of a bet: 1. Getting a better hand to fold (e.g., bluffing) 2. Getting a worse hand to call/raise (e.g., value betting) 3. Protecting your hand (e.g., flopping a low top pair heads up) But my favorite chapter is Gavin Smith's short text on exploiting the big stack. He advocates going after pots before the ante to build a big stack by the time the ante's introduced, and then discusses specific plays to accumulate the big stack. One very interesting play is the flat-call steal, where a player raises and you flat-call widely if you have position and feel confident out-maneuvering the initial raiser post-flop. A lot of very interesting material and quite well-edited. Highly recommended for tournament players. - Collin Moshman Author, Sit 'n Go Strategy

Published by Thriftbooks.com User , 14 years ago
This is the type of book I hate to recommend to other players. It just flat out gives away too much information (see previous reviewer's comments re: content). Novices and those of us who have only been playing hold'em for 5 years or less could spend another 10 years on the felt to ever absorb this much knowledge. I own 50+ poker books and countless DVD's. This is among the top 3, including the Harrington on Holdem series (1-3) and Super System. Michael Craig has produced another poker gem. If you paid $100 for this book you would still be receiving a great bargain. Buy this book now while you still have time to exploit your opponents (that is before they read it too).

A true diamond in the rough...

Published by Thriftbooks.com User , 14 years ago
In the midst of the poker frenzy that has erupted as a result of all the tv coverage and marketing, one clear result has been the emergence of myriad poker how-to books. It isn't surprising that many individuals and writers are capitalizing on a profitable opportunity and terrific timing, but the consequence is that there are so many out there which just don't produce quality reads or aren't from well-known names. This book is the answer to that! In The Full Tilt Poker Strategy Guide: Tournament Edition, Michael Craig has assembled and drawn from some incredible talent who possess invaluable insights and lessons to share. But don't be fooled - this isn't necessarily going to try to instruct you on every possible hand with every possible strategical approach to each given situation. That would be impossible. What this guide does is far more impressive - it encourages the reader to consider the mindsets of the pros and how they approach their hands and the situations at the table. This book gets you, the reader, to think for yourself why you should play a given hand or utilize one type of approach in a particular manner. And as the various experts suggest, different hands can be played differently, depending upon given situations. As Howard Lederer says regarding his chapter on the theory of "Leverage," which is a concept that not previously been written about to my knowledge, "The goal here was to get you thinking about how leverage can help you after the flop" (p.45). There are, certainly, plenty of statistics and math to consider which are graspable to those whose trade isn't math, and Andy Bloch's charts are a nice reference for the strengths of pre-flop hands vs. all other hands you may face. There are new concepts as well as clarification and elaboration on some of those ideas that are familiar to the serious student of poker. I like that it really doesn't try to sell you on a particular overall method, but suggests some different and, even contrasting, approaches (especially chapter 5, titled, "[Don't] Play Like Ted Forrest)." This strategy guide makes for not only good reading but also deep thinking. And that is a tremendous aspect of this book - the concepts are very deep, but the language and manner in which they are described are very comprehensible. It flows well, and you get the feeling that the different authors are almost conducting thoughtful interviews and are right there explaining why and how to do what they sugget. It doesn't have that stiff, didactic manner that some instructional books do; rather, it is told matter-of-factly and clearly. It reads quickly, and I found myself going back and rereading portions over again because there is so much substance in each of the chapters. And, as something of a relief, you don't have to be a math genius or have played for decades to grasp the principles in this book (but, as is suggested throughout the book, it all becomes more clear and applicable with practice at the table). These

Published by Thriftbooks.com User , 14 years ago
This is destined to become one of the "must have" poker books. Brunson's Super System (I and II) covers the spectrum of poker as played in ring games at casinos. This volume is the counterpart for tournament play. The title suggests a joined-at-the-hip connection with the web site. Nothing could be further from the truth - the primary connection I see is that the book covers the games played on the site, and the site covers the games played at casinos, the World Series of Poker, etc. Michael Craig (author of "Professor, the Banker, and the Suicide King", probably the best told tale ever of the biggest poker game ever) has done a masterful job of organizing the book. Though I did note a few small grammatical problems, none interfere with either the flow or the message. Games discussed include: (1) No-Limit Hold'em (of course), (2) Limit Hold'em (similar name, different game), (3) Pot-Limit Hold'em (different strategy requirements), (4) Pot-Limit Omaha, (5) Omaha Eight-or-Better, (6) Seven-Card Stud, (7) Stud Eight-or-Better, and (8) razz. Long, long ago and far, far away I was a Draw Poker and Five-Card Stud player. Things I learned from those games make me a better Hold'em player, and if you'll learn a bit about other variations of poker you will find your game improves. A story has been told about Chris Ferguson and Andy Bloch in which Ferguson spotted Bloch setting in a restaurant. When Chris went over to Andy's table he saw that Andy was poring over a binder of computer-generated tables, the result of Bloch's extensive simulations of hand versus hand, hand versus table, etc. Ferguson had done precisely the same sort of computations prior to launching his highly successful career in tournament No-Limit Hold'em. The similarity of their style of play - and their success - stems from this mathematical analysis away from the table. In one fact and concept filled chapter of 57 pages Bloch presents a series of tables showing some of the results of his simulations. This chapter alone is worth far more than the price of the book. Other notable chapters include: - A chapter on Seven-Card Stud by noted Stud authority Keith Sexton. - A cram session on Razz strategy by Huck Seed and Ted Forest. - Chris Ferguson on Pot-Limit Omaha. - Ironically, Mike Matusow on Omaha Eight-or-Better - a game in which bluffing is particularly difficult written by a master of bluffing at No-Limit Hold'em. - Limit Hold'em by Howard Lederer. - Rafe Furst and Andy Bloch on Pot-Limit Hold'em. - Phil Gordon discusses Short Stack Play in No-Limit Hold'em. - Gavin Smith shares some of his tricks for Big Stack Play at No-Limit Hold'em. - And more. This book does for tournament poker what Super System did for ring games. If you aspire to be good - really good - at tournament poker, you need to study this book.

Published by Thriftbooks.com User , 14 years ago
I was suspicious of this book and wasn't sure it would include any new information that isn't in other poker books (Harrington or Sklansky and Malmuth). Many poker books rehash concepts (play tight early, more aggressive later). This book has several new concepts I haven't read before. For example, Howard Lederer talks about a hand versus Phil Ivey when Ivey raised. Howard raised all-in. Ivey folded. Lederer analyzes this nondescript hand and explains the concept of leverage. Andy Bloch in his preflop hands goes far beyond "play early tight, play quality hands" and gives a chart for the "Jam or Fold" game (small blind v. big blind). His chart, he believes, is superior to the Sklansky-Chubakov Jam of Fold ratings because in the S-C rankings the small blind turns up their hand. In Bloch's chart, the small blind does not (which is more realistic). Andy explains that the S-C underestimates hands such as 9-T s Jam value. Howard Lederer's chapter on Limit Holdem made me excited to play Limit holdem. He gives the reader a good limit system that the blinds can play out of position against a raiser. Chris Ferguson's chapter on postflop No Limit play is also valuable. Ferguson's chapter is like a minilesson with him. Other games besides Holdem are covered. Matusow in the 08 chapter explains why he raised with K-Q-J-6 facing heavy preflop action! The book is full of things like this. I was afraid that this book was an attempt to make a quick book on the poker boom with many authors writing a chapter for a quick paycheck and not taking responsibility for overall shoddy work. It isn't the case. You will find material here that you will not find elsewhere.
Trustpilot
Copyright © 2022 Thriftbooks.com Terms of Use | Privacy Policy | Do Not Sell My Personal Information | Accessibility Statement
ThriftBooks® and the ThriftBooks® logo are registered trademarks of Thrift Books Global, LLC