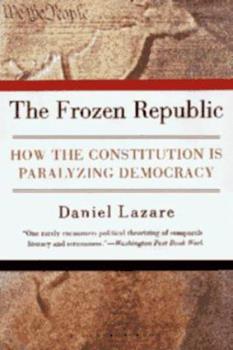 The Frozen Republic: How the Constitution Is Paralyzing Democracy

In this thought-provoking polemic, "an accomplished iconoclast" whose "knowledge of american history is as persuasive as his wit" (New York Times Book Review) blames america's outmoded constitutional system of checks and balances for the political malaise and governmental gridlock of recent years. Index.

Best ORIGINALIST argument I've read for a parliamentary government in the U.S.

Published by Thriftbooks.com User , 16 years ago
People calling Lazare a socialist are the ones who obviously don't know the Constitution or its formation. The Founders, after the Preamble, mentioned Congress first, in Article II, because the envisioned -- and PLANNED and DESIRED -- that Congress be the strongest and pre-eminent of the three brances, ideas of "checks and balances" notwithstanding. Today's "executive presidency," going to war without explicit Congressional declarations (whether it be a Republican or Democratic president who does that) might have made some of them wonder just what they had rebelled for. That's certainly true of those who signed the Declaration of Indepdendence. Lazare does have some ground to stand on, though, when he argues that the Constitution was in some ways "hijacked" by a more conservative "counter-reformation." The Frozen Republic is his argument of how to get back to the spirit of 1776, in the places where the spirit of 1787 fails to live up to it.

Published by Thriftbooks.com User , 20 years ago
Lazare has hit the nail on the head. Everyone is always complaining about the government, and yet, the system by which that very government is ruled is considered holy. How can this be?Real reform, and the only reform that can snatch our government away from the big money handlers that are running it now, is only possible from the ground up. That means that you cannot expect that a little tinkering will fix it. You have to realize that the entire system needs an overhaul.Lazare makes that point beutifully in his book. His grasp on American history and how the constitution has failed in the past is an eye opening experience. This is required reading for anyone interested in reclaiming thier democracy.

Published by Thriftbooks.com User , 21 years ago
Lazare makes a very original argument (so original that, clearly, it went right over the heads of several of the reviewers on this site). What Lazare is arguing is not-as some seem to think-ideological, per se. Rather, he is arguing structure. The rights that the Constitution was designed to protect is not the question; the question is whether the structure set up by the Constitution is effective in that protection. More importantly, does that protective structure ultimately tend to freeze us in eighteenth century thought, making the transition into the twenty-first century unduly painful?I highly recommend the book, not because I think Lazare has all the right answers but because he has asked some very important questions. That is something sorely lacking in U.S. politics. We tend to cling to our individual partisan political views with religious fervor.

If you think it's broken, let's start figuring out why...

Published by Thriftbooks.com User , 21 years ago
This is an intelligent, reasonable exploration of the problems with the American governmental system. It is certainly not perfect; any effort so ambitious that it tries to cover the history of Constitutional governments for the last 600 years is bound to overreach. But Lazare does a nice job of producing a readable, rational hypothesis as to what's ailing the USA and of suggesting some solutions. The simple fact is that what the written Constitution says and what our government do are barely related. Lawyers take an entire class in law school studying the contradictions and hypocracies currently involved in Constitutional law. We lawyers learn how to use the current law to win cases and to argue our client's positions, but no one ever steps back and looks at the system as a whole and says, "hey, this needs to be fixed, it's not working anymore!" Lazare in this book tries to give some reasons and make some suggestions. Most people will find his suggested response to the problems -- eliminating the Constitution and its checks and balances -- too radical. But those of us who are paying attention to our world are glad that someone is learning from history, and is attempting to raise the level of political discourse in this nation above the mindless level of the current political debates. ("I'm a real reformer!" "No, he's a Washington insider -- I'm a real reformer! I was only in Washington when Dad was acting as President!" "Even though I've been Vice-President for the past eight years, I'm really an outsider who's all for reform...!") Real reform might have to jettison the entire system.

A powerful, literate examination of the US Constitution

Published by Thriftbooks.com User , 24 years ago
Daniel Lazar's book is a literate, powerful, critical, and insightful commentary on the extent to which the structure of the US Constitution has guided American history for the past two centuries. Beginning with the Elizabethan era of Britain, Lazar uses historical examples and astute analysis to reveal the true motivations behind the founding fathers in constructing the document that shaped this nation. Departing far from the "child's history" of the United States that is to be found in many history books, "Frozen Republic" draws back the curtain to reveal how the Constitution doomed the United States to such seeming unrelated tragedies as the bloody civil war and 20th century urban decay. Although far more critical than other Constitutional works, Lazar's tome avoids becoming political polemic by confining most arguments to historical fact, instead of concentrating upon political revisionism. Through careful and methodical analysis, Lazar reveals to the reader how our Constitution is one of the least democratic in the free world, and what alternatives exist. Lazar is a barely veiled Anglophile (Great Britain is the most common counter-example to the American political process), and openly advocates a parliamentary system for the United States. He is able to muster powerful arguments for this position, and only occasionally slips into the critical fallacy of idealizing other systems or experiences without proper evidence. While Lazar's work lacks realizable suggestions for changing the American system, it does serve as a powerful inspiration for further thought on the political structure and processes of the United States.
Trustpilot
Copyright © 2022 Thriftbooks.com Terms of Use | Privacy Policy | Do Not Sell My Personal Information | Accessibility Statement
ThriftBooks® and the ThriftBooks® logo are registered trademarks of Thrift Books Global, LLC