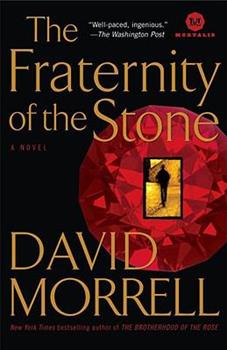 The Fraternity of the Stone

(Book #2 in the Mortalis Series)

Drew Maclane was a star agent - until the day the killing had to stop. He withdrew and for six years lived the life of a hermit in a monastery. But someone has tracked him down, leaving a trail of corpses. Someone who knows all about him, who knows how to draw him back into that electrifying world where no one is as he seems, and where life's most horrifying and harrowing game is played....

Published by Thriftbooks.com User , 19 years ago
This book was wonderful. I just finished reading it after receiving it from my historyteacher. I could not stop reading it. If you like Clive Cussler books this book will appealto you greatly! The way Morrel incorporates an elaborate plot, conspiracy, action, love,and history into one book is amazing. Highly recommended to anyone who enjoys theabove-mentioned aspects of a book. If I could give this a 6 star rating, I would. Buy this.

MORRELL GETS BETTER AND BETTER

Published by Thriftbooks.com User , 20 years ago
No matter what order you read his books in, each is complete in itself and explains history and the Catholic church in relation to the the current book. A priest finally explains the origin of the ring with the ruby, sword and crucifix and who wears it. Drew is living in a monastary to escape from those who would kill him. Everyone thinks he is dead for he has tied up all the loose ends and entered the hermit order to redeem his soul. But after six years his location is found out and he escapes only by a twist of fate. Now he must seek revenge on those who violated the Church. Contains a lot of violence, killing and has a lot of action but it is a good read.

Published by Thriftbooks.com User , 21 years ago
Well, it looks like I'm late to this on reviews so let me just list a few highlights:OVERALL FEELING: Great pacing; tense; excellent main character; ending was a bit of a letdown; great spy ideas; great action.SCORING: Superb (A), Excellent (A-), Very good (B+), Good (B) Fairly Good (B-) Above Average (C+), Mediocre (C ), Barely Passable (C-) Pretty Bad (D+), Dismal (D), Waste of Time (D-), Into the Trash (F)DIALOGUE: A- STRUCTURE: B+ CHARACTERS: B+ EMOTIONAL IMPACT: A SURPRISES: B+ SPY IDEAS/GADGETS/SKILLS: A INTRIGUE: B+ PACING: A THE LITTLE THINGS: A OVERALL STYLE: A FLOW OF WORDS: A- CHOICE OF FOCUS: A TRANSITIONS/FLASHBACKS/POV: A COMPLEXITY OF WORDS/SYMBOLISM/THEMES: B+OVERALL GRADE: A (at the lower cusp)CONCEPT: Great idea. What makes this blend interesting is Morrel's mix of the church with the violence of espionage. Drew carries the guilt around with him and worries about his soul, but another part of him is still a killer.INTRIGUE: Keeps turning the cork screw here. For a good part of the novel, Drew isn't sure who's trying to kill him. And, even when he gets a lead, its only one segment of the part. So, he may wipe out a few enemy agents but it takes a long time before he realizes who's out to get him.CHARACTERS: There's a great deal of focus on Drew and he's an interesting character. He isn't the typical assassin type since he bears so much regret that he sequesters himself away into a monastery and then inflicts wounds on himself with a little whip. But once he gets moving, he's a killing machine. And, I think the majority of readers find this fascinating. We may not admit it but a spy is like the cowboys of old; self sufficient and working outside the rules. In a homogenous society, this is a very attractive set of traits. Drew has an interesting mix of temptation in regards to sex with his old love. THE LITTLE THINGS: Morrel did his research. Many of the means used to execute maneuvers seem to be real, as if real spies would have used them in such circumstances. This isn't a silly James Bond style story. Agents get hit by bullets and it hurts like hell. Lots of questions that Drew asks himself. Helps us understand the life of a spy and risks to be avoided (vital towards understanding the agent and making the story work).Highly recommended to spy thriller fans.

Published by Thriftbooks.com User , 21 years ago
This is the first david morrell book i read. But it is a truely amazing book. Author cares about details so much such as the death of the mouse Stuart Little. He describes the training and life style of an agent in a very realistic way. He also gives us the story about Iranian leader Ayetullah to make the story linked with the reality so this is not a pure fantasy for a reader. Moreover he explains the structure of church very well-especially for a muslim like me. I wish he developed the relationship between Arlene and Drew more through the story then the book would be excellent.

Published by Thriftbooks.com User , 22 years ago
I have previously read other Morrell books and somewhat expected this one to be a little less delivering when I started. Boy was I wrong! Morrell takes us through the first few chapters giving the necessary background info while weaving in the events of the present, set in a monastery. The story then takes off as the ex-master assassin Drew is forced to run for his life from the monastery escaping those who had killed off all the monks. He is forced back into an unfamiliar society searching for friends. He is stabbed in the back and rekindles an old love while learning of an underground fraternity of priests dedicated to protecting the Church at any cost. I felt this book was an excellent showing by Morrell-twisting the usual violence and chaos in with the usage of religion, immense inner struggle, and an interesting new story involving the protection of the entire Catholic Church. A highly recommended action-packed book!
Trustpilot
Copyright © 2022 Thriftbooks.com Terms of Use | Privacy Policy | Do Not Sell My Personal Information | Accessibility Statement
ThriftBooks® and the ThriftBooks® logo are registered trademarks of Thrift Books Global, LLC