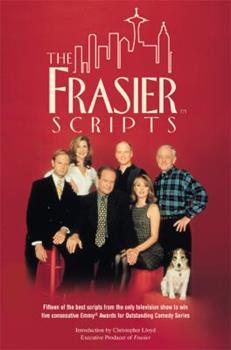 First-time publication of 15 full scripts, including all the Emmy Award winners, of the sensational TV show, starring Kelsey Grammer, David Hyde Pierce, John Mahoney, Jane Leeves, Peri Gilpin, Dan... This description may be from another edition of this product.

For the serious Frasier Fans

Published by Thriftbooks.com User , 14 years ago
Fifteen of the best episodes and their original scripts. What could be better than watching these and following along with the scripts to see exactly how the written word was acted out by this great group of actors? They have done a masterful job in choosing 15 of the best scripts, especially the pilot episode "The Good Son". Watching them trying to establish a long ago relationship between father and son is great! Following with the script makes it even better. I highly recommend The Frasier Scripts for all of us serious fans. We can always use more Frasier. Oh how I wish they'd bring the show back, even for a reunion/bring everyone up to date on what's happening now type show would be great. Maybe someday.

Published by Thriftbooks.com User , 15 years ago
Frasier was long one of my favorite television shows, and purely from a writing standpoint, I enjoy reading screenplays and scripts to see just how different writers structure their stories. This book collects 15 scripts from the show's first six seasons, and having seen most of the episodes, I can concur that they have chosen 15 of the best episodes. From a storytelling standpoint, these are just great tales. The pilot episode, in which Frasier and his father try to adjust to living together, is touching and funny in all the right proportions. Stories like The Matchmaker and Ham Radio lose almost nothing in their pure script form, and The Ski Lodge is just as funny as it was on television. Even moments of pure slapstick, like the classic "silent movie" opening scene from Three Valentines, is delivered very well here. From a writer's standpoint, the book is also entertaining. We can see how the many wonderful writers crafted their stories. Those segments that don't work as well in the script fall a little flat only because the performances on the program were so wonderful. For that, the actors and writers both deserve credit -- the actors for having that talent and the writers for knowing how to use it. There are a lot of things that don't quite work if you don't know how it was delivered, and the fact that it made it into the show proves that the the writers knew what they had and how to use it. If you aren't familiar with the episodes presented here, some of the scripts may not read as well, but if you're a fan of the show, this really is a wonderful collection.

It is an original!

Published by Thriftbooks.com User , 21 years ago
This book is great because it is an original! You have the original storylines and no additions from other authors. You learn how such a series is made and how important the actors are to bring the action to live.

A Collection of Classic Moments

Published by Thriftbooks.com User , 21 years ago
This book is a perfect mechanism for catching up on the early years of Frasier or to relive those wonderful moments. I started watching Frasier in season 6 and this book has been a constant companion to fill the gaps and relive the moments I loved from the episodes I have caught up on. Having this book WILL lift your IQ!!

Published by Thriftbooks.com User , 22 years ago
This book was a lot of fun reading. The Fraiser Scripts is a great book. A must have for the die hard Fraiser fan.
Trustpilot
Copyright © 2023 Thriftbooks.com Terms of Use | Privacy Policy | Do Not Sell My Personal Information | Cookie Preferences | Accessibility Statement
ThriftBooks® and the ThriftBooks® logo are registered trademarks of Thrift Books Global, LLC