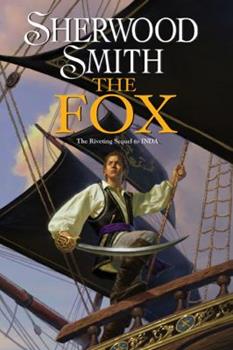 The Fox: Book Two of Inda

Attending the King's Military Academy had been Inda's greatest dream. But Academy reality is far from what he'd imagined-for by defending the second son of the king, Inda becomes embroiled in a vicious political struggle among the nobility that he has no hope of winning. But these petty squabbles are only a faint shadow of what is to come. His future holds betrayals he cannot even imagine, and before growing to manhood, his fate will sever him from...

Published by Thriftbooks.com User , 11 years ago
"Fox" picks up at the end of "Inda", to chroniole Inda's campaign to end piracy in the strait. Inda's story is a wonderfully engaging tale, with a highly likeable central character who is forced into a violent life. After the ship on which Inda was indentured and wrongfully exiled is attacked by pirates, the survivors band together to fight piracy under Inda's inspired direction. Beyond the challenge of the pirates' Brotherhood of Blood looms the Venn, the seagoing country which has threatened Inda's childhood home all his life. Again, the tale includes wonderful cameos of the excellently drawn peripheral characters as they begin to carve out their lives. The book handles the beginnings of adulthood and sexuality in the central characters with sensitivity and thoughtfulness. Here again as in Inda, magic comes into the tale in only a minor way. Unlike many books that deal with sea battles and maneuvers, the intricate detail of large ship sailing never intrudes in the story, but is instead brushed on in the passing of the plot. Another excellent book in this excellent series.

Published by Thriftbooks.com User , 12 years ago
I have learned the hard way that sequels are not always up to the quality of the original. This book, however, carried forward the stories of the characters, and keeps the reader wanting to know what happens to them as they progress in their life's adventure. I am picky about fantasies --but this series has captured me. It's a good way to spend a rainy day, or a quiet evening.

Published by Thriftbooks.com User , 12 years ago
After the high standards of Inda, the prequel to Sherwood Smith's The Fox, it was next to impossible to be better this time. But, still, Smith delivers a quality second book in the series. After the drama of the first book, Inda was left at sea after being forced from his homeland. Smith had really run Inda through a ragged race of events while growing him slowly into the man he would become. That process continues in The Fox. Inda remains, as always, the leader without an ego. He follows the impossible standard of leading from the front. As a weapon against pirates, that had been effective. At home, the politics of selfishness and hunger for power continue to spiral towards an inevitable conclusion. Inda's family continues to cope with the second and third order after-effects of unconscionable acts by members of the ruling family. This is not an instant process -- rather the villains continue to grow more and more isolated from reality as their actions lead further and further from the honor and loyalty that is expected. The many supporting characters remain very interesting. Flaws, strengths, and change are all part of each character's story and Smith really keeps them moving. It's like a well choreographed ballet with many different dancers moving at the same time. However, I felt at times that the story seemed to drag. As a reader I would come to a point where the inevitable next step was obviously coming and I didn't want to slog through another 100 pages to get to it. The "filler" sections were not really boring, but they didn't seem as vital to the story as they did in most of the first book. That doesn't mean that The Fox was slow -- merely that Smith had a lot of story to tell and sometimes it felt like it took a long time to get where she wants to take us. Again, Smith's ability to treat different moral perspectives as windows into a character's personality instead of a judgment made several divisive themes entirely appropriate. She effectively creates character faults and shows us how things taken too far can turn from bad to good. On the whole, The Fox was a good book. Not as good as Inda, but still worth the effort to get through almost 800 pages of text. I look forward to further journeys in the world Sherwood Smith has created.

Published by Thriftbooks.com User , 13 years ago
This story is amazing I love the richness and depth, and especially the complexity of Sherwood Smith's characters. Inda and The Fox are two of my favorite books ever, and for someone who reads as much as I do that says alot. If you are looking for a great book I highly recommend this series!

Published by Thriftbooks.com User , 14 years ago
I almost put 4 stars because I would give Inda 5 stars and found it to be a slightly better book, but then I had to remind myself how much better BOTH books are than most books being published in the genre, so 5 stars it is. I was completely captivated by reading Inda last year and have been waiting impatiently for The Fox to come out--I found the only copy in a nearby bookstore on Monday and was so thrilled that the store clerk thought I was a little weird! At any rate, I've finished reading and will now wait just as impatiently for the third book. As in Inda, injustice continues to ride Inda's heels in The Fox, making you root for him every step of the way. The irony, of course, is that Inda is so very just and is working for the greater good on almost every page. The Fox, which starts with Inda as a new prisoner on a pirate ship, goes on to show him engineering a mutiny and becoming a pirate to pirates. The world-building is wonderful, as is the plotting, but for me, the most fascinating thing about these books is the characters--their various motivations and interactions. The characters read as being so very real that, as in my experience of the first book, it is easy to care for them and to feel like they are about to walk off the pages. (I have gotten to be a picky enough reader that not many authors can do this to me anymore, so Smith's books are a happy find!) For those who've been scoffing about Inda's heroic perfections, his imperfections show a bit more in The Fox--but the strength of his integrity and of his desire to make the world a better place keep coming to the forefront. Both books are also a curious commentary on the nature of true leadership, as we consider characters who WANT to be great leaders and don't understand why they aren't, then contrast them with Inda, who has a natural gift for leadership (and what does this mean?). Inda's friend Fox makes a particularly edgy foil for him. Smith also riffs on the meaning of great beauty and the uses and abuses of sexuality, though there must be a universe somewhere where Joret and Tau hook up! Plot-wise, the main thrust of The Fox is Inda's efforts to break the hold of a pirate community over the sea lanes, with a segue to the beginning of his work to stop the Venn invaders, possessors of a large and magically supported navy. Another player, the ominously powerful magical kingdom of Norsunder, threatens to take center stage at a later point. Meanwhile, back in Inda's home kingdom, plots and counterplots continue to swirl, with certain key villains getting some comeuppance, but not without casualties. Inda also meets up with a new breed of villain, causing considerable angst for readers until he is rescued. In the sense that The Fox is a middle book in a trilogy or series, it feels somewhat incomplete, but it does end with a great setup for the next book, leaving Sherwood Smith with rich material to develop--I hope for next summer, if not sooner! I will add that Smith's take on
Copyright © 2020 Thriftbooks.com Terms of Use | Privacy Policy | Do Not Sell My Personal Information | Accessibility Statement
ThriftBooks® and the ThriftBooks® logo are registered trademarks of Thrift Books Global, LLC