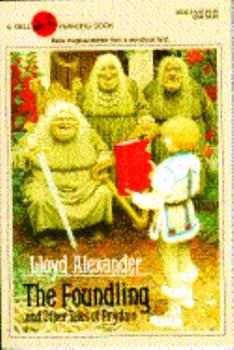 (Part of the The Chronicles of Prydain Series)

A companion book to The Chronicles of Prydain, this collection of short stories revisits beloved characters and reveals more about the history of the magical land of Prydain. Here, readers will find... This description may be from another edition of this product.

Published by Thriftbooks.com User , 16 years ago
Lloyd Alexander's "Chronicles of Prydain" have become a classic staple of fantasy literature, a few rungs below "Lord of the Rings" and a few inches down from "Chronicles of Narnia." In this volume, all six books in his series are brought together, showing all of Prydain's beauty, richness, humor and sorrow as one big book. "The Book of Three" opens with Assistant Pig-Keeper Taran yearning for adventure -- and getting more than he bargains for when he chases the pig into the woods, and is nearly run down by a sinister horned rider. Soon he teams up with a wandering king-minstrel, a sharp-tongued princess and a furry creature called Gurgi to save Prydain from the power of the Horned King. "The Black Cauldron" has Taran and the others setting out to destroy Arawn Deathlord's evil cauldron, which turns dead men into unkillable zombies. But other forces are after the cauldron, including three peculiar witches who insist on trading something for the cauldron. What is worse, the company faces treachery from someone in their own camp... "The Castle of Llyr" ties up some loose ends from the first book, as Princess Eilonwy is sent to the isle of Mona to become a fine lady. But she has barely arrived when she is kidnapped by a minion of the evil enchantress Achren, her "aunt." Taran sets out to save her, but must team up with the young man who wishes to marry Eilonwy -- even though Taran is rapidly falling in love with her. "Taran Wanderer" has Taran setting out to discover his past, since he feels he can't ask Eilonwy to marry him if he is lowborn. With only Gurgi at his side, he encounters evil wizards, malevolent bandits, and finally learns that his father just might be a shepherd... until a new revelation leads him to learn of his true worth. "The High King" wraps up the saga, with Taran returning home. But no sooner has he arrived than he learns that noble Prince Gwydion has been half-killed -- and the magical sword Dyrnwyn has been stolen by Arawn Deathlord. Now the heroes set out one and for all to attack Arawn's stronghold and get back the sword -- but how can they defeat a deathless army and a shapeshifting enemy? Finally, "The Foundling" fills in a few of the gaps with short stories that illustrate the backstory of the Prydain novels. Among the stories are the tragic history of Dyrnwyn, how the wizard Dallben was reared by the three witches (and where he got the Book of Three), and the love story of Eilonwy's parents. Take two parts "Lord of the Rings," add a bit more humor and comedy, and stir in bits and pieces of Welsh mythology. That pretty much sums up the Prydain Chronicles, which is one of the rare series that is meant for kids, but is as rich an experience for adults. Even better, if they know the origins of the old legends and myths that make up the edges of these stories. Alexander populates this little world with evil enchantresses, deathless warriors, eager teenagers and talking crows, all the while coming up wit

Don't miss out this book!

Published by Thriftbooks.com User , 18 years ago
"Stories of the mythical land so beautifully conceived by Alexander are written with grace and humor....Each tale stands alone, a small gem." -Bulletin of the Center for Children BooksThis book is really all adventure, magic and very imaginative! The short stories makes the other Prydain Chronicles clearer, more interesting, and makes it have more depth.There are eight tales in this book:"The Foundling" is a story of the old enchanter Dallben and how he is found as a baby floating in a wicker basket by the three old hags of the Marshes of Morva. This tale is interesting and also surprising in a way."The Stone" tells about a farmer named Maibon and how he helps one of the Fair Folk, Doli(!), and recieves or more like requests one of the precious Stones which can make the person and everything else stay young forever."The True Enchanter" is a romantic story of Princess Angharad, the mother of Eilonwyn, and how she has to choose her husband, an enchanter, at the Castle of Llyr."The Rascal Crow" is a kind of like a fable about a crow who scorns the help of others and ends up nearly getting killed if it was not for those very animals he had looked down on."The Sword" is a sad and grim tale about the real history of the enchanted sword Dyrnwyn and of King Arhitta."The Smith, The Weaver, and the Harper" is an interesting tale about how the Lord of Death attempts to get the greatest hammer, shuttle, and harp of all Prydain."The Truthful Harp" is about who else than Fflewddur Fflam and about his special, if a bit troublesome, truthful harp."Coll and his White Pig" is the story of Coll and how King Arawn tries to get Henwig. Animals of all kinds aids Coll in his journey to retrieve Henwig.This book was very interesting and I honestly can say that it's one of the best books I've ever read. The moment I read the first page, I didn't want to stop until I finished. Even though it looks very boring because it is a fairly small book, don't 'judge a book by it's cover!' I definenly and higly recommend this book!

A must-read for the fans of the Prydain Chronicles!

Published by Thriftbooks.com User , 18 years ago
I've always loved reading the Prydain Chronicles by Lloyd Alexander. Filled with great adventures, the Prydain Chronicles tells the story of Taran, a lowly assistant pig-keeper, who grows up fighting evil with the comradship of numerous friends. His most beloved friends include the high-spirited and talkative Princess Eilowny, the faithful to the end Gurgi, and Fflewddur Fflam, a king who wants to be a bard. In the five books of the Prydain Chronicles, Alexander opened up the reader's eyes to a wonderful world of imagination.In "The Foundling and Other Tales of Prydain", the reader is given a chance to explore more of Prydain, the world of adventure and magic. Altogether, there are eight enchanting tales in this book:"The Foundling": Learn about Dallben when he was young and find out how he came to be in possession of The Book of Three."The Stone": Read about the lovable yet still bad-tempered Doli of the Fair Folk and his magic stone."The True Enchanter": The story of how Princess Eilowny's mother, Princess Angharad of the Castle of Llyr, finds true love with a true enchanter."The Rascal Crow": As Medwyn, the ancient guardian and protector of animals, the rascal crow Kadwyir learns a valuable lesson in an Aesop's Fable type of story."The Sword": Learn the terrible and tragic story of Rhitta, the sword Durnwyn, and the Spiral Castle."The Smith, the Weaver, and the Harper": Of the three, who was the wisest and became a hero as he faced evil?"The Truthful Harp": King Flewddur Fflam maybe getting a lot more than he expects when he receives a beautiful harp..."Coll and His White Pig": Finally, the story of brave Coll when he sets out to rescue Hen Wen, his white pig.A truly must-have book for the Prydain Chronicles fans, this book won't disappoint. Though this book is aimed mroe for Young Adults, teens and adults might probably enjoy this book, too. I love how the stories blend into the history of Prydain and how us readers can learn more about our favorite characters. Though it wouldn't matter whether you read this before or after the Prydain Series, I suggest that afterwards is better, I think this book will be better enjoyed that way. Don't forget to read the author's note! All-in-all, a short read full of terrific stories!

Published by Thriftbooks.com User , 22 years ago
This is an amazing collection of short stories, that fills in gaps in the immortal Prydain Chronicles. Among the stories are the chilling story of Spiral Castle and the sword Dyrnwyn, a story of crime and horrific punishment, and the story of Angharad, Eilonwy's mother, who defied tradition and orders for true love. Also, the backstory for the three hags in the Marshes of Morva, the book of Three, and the foundling Dallben. A must-see for Prydain fans.

Published by Thriftbooks.com User , 22 years ago
This collection of short stories focuses on events long before Lloyd Alexander's Prydain Chronicles. While it sheds more light on some of the characters and situations in that series, the book really stands alone. And, to be honest, I liked it better. Alexander evokes the atmosphere of the best fairy tales without merely copying them. Often, modern writers in this genre try to candy coat the material, removing the danger and threat of evil from their fantasies; or they merely parody existing tales, attempting to add "sophistication" to their stories so that we jaded adults will like them, too. Alexander is above such tactics. These stories are really morality tales about honor, the price of knowledge, the importance of community, the value of friendship, the sacredness of life. Readers, regardless of their ages, come away having learned something. But Alexander is never preachy or obvious; he tells his tales with wit, charm, and imagination. Buy this book for yourself, read it to your children, and save it for your grandchildren.
Copyright © 2022 Thriftbooks.com Terms of Use | Privacy Policy | Do Not Sell My Personal Information | Accessibility Statement
ThriftBooks® and the ThriftBooks® logo are registered trademarks of Thrift Books Global, LLC