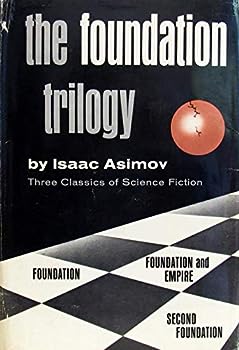 (Part of the Foundation Universe Series)

This description may be from another edition of this product. Isaac Asimov's seminal Foundation trilogy--one of the cornerstones of modern speculative fiction--in a single hardcover volume. It is the saga of the Galactic Empire, crumbling after twelve thousand...

Not what I expected

Published by Vicki , 1 month ago
Careful - this is a transcript of a BBC RADIO ADAPTATION of Asimov's Foundation Trilogy. This does NOT contain the 3 actual books.

Recieved an adaptation, not the original.

Published by Morgan , 6 months ago
I received a transcript of the BBC Radio adaptation, which was not what I ordered. It did arrive on time and in perfect condition, but I was very disappointed to have an adaptation and not the original version.
Published by Thriftbooks.com User , 5 years ago
Dr. Asimov actually tied together his Robots/Galactic series all the way through the Foundation group. I have read them 3 times and it is just as good and interesting with each reading. Asimov is by far my favorite author of SciFi, science for youth, Biblical commentary, and murder mysteries.

Published by Thriftbooks.com User , 11 years ago
I read these at the behest of a neighbor. I had to have all of them after that (at least the ones written by Asimov). I wasn't interested in the non-Asimovian "Second Foundation" trilogy. But The Original Trilogy is great, and it continues in many other books with the word Foundation in it.

Published by Thriftbooks.com User , 12 years ago
This is a wonderful edition of this classic series. Very nice, slightly glossy, pages and excellent binding. I would say this should be considered as the "definitive" version. If you're a new-comer to the Foundation series, or a veteran looking to replace those battered old paper-backs with a shiny new edition, this one should be top of the list. The story itself is 5-star greatness, of course! The price is also excellent and shipping was super-fast, for me.

Published by Thriftbooks.com User , 12 years ago
Asimov is not my favorite author--nor is he my favorite sci/fi writer (that would be Simak). Be that as it may, This is my favorite work of sci/fi. Not due to the quality of the prose, but because of the ingenious stories and characters here. I also like the great span of the trilogy. But, the main reason I keep re-reading it year after year is because of The Mule. The Mule is one of the most evil and tragic personas ever to grace a novel. The depth of his solitude is on a par with Ophelia, Gollum, or Count Dracula. The Mule is all powerful, pathetic, depressing to the point of suicide. An unforgettable character in all of literature.

Published by Thriftbooks.com User , 22 years ago
This series generally has total enthusiastic acclaimation. Those very few who criticize the Foundation "Septology", are nit pickers. They are so enthralled with the concept behind the story, that all they can do it find the flaws, which include a detached perspective (it is written as history after all!), lack of depth of female characters, etc. The reality is, how many books can you give a 10 year old, or a 70 year senior, and be ensured both will enjoy it equally, even if they already have read it?Asimov was in his early 20's when he wrote this, and modern readers forget this was pulp fiction. My only negative is the complete lack of insight as to our society's current computerization, leaving this subject vague and mysterious.It is refreshing to read a series so fresh in its approach, and "psychohistory" is still an incredible, yet realistic, concept.The Seldon moments, which are a highlight of the series, contain an unexplained mystery, namely "Did Seldon create his Hologram appearances beforehand, just letting the Second Foundation-ers time their release, or were the Holo-appearances complete fabrications created by the Second Foundation-ers to keep the Psycho-Historical time line on course?"So not only read this initial series, but all of the books around it! If you read Sci-Fi, this is one of the MUST reads for ALL Sci-Fi readers. the worst you will come away with is "wow, incredible, but maybe if it also had...". You will be thinking about the book afterwards for weeks or even months.really.

The Foundation of science fiction

Published by Thriftbooks.com User , 24 years ago
YOU MUST READ THE FOUNDATION TRILOGY!!! The Foundation Trilogy proved to be a milestone and gave science fiction-literature of the 50's a complete face-lift almost overnight. This new type of science-fiction literature was much more profound and intellectual and focused more on the human psyche rather than green-eyed monsters with ray-guns. Eventually, others followed Asimov's steps, the most famous being Frank Herbert. What Asimov accomplished was truly amazing, and that explains why the Trilogy won the Hugo Award for the best science-fiction series of all-time. There are four more novels in the series, read them and I'll guarantee you'll enjoy them
Copyright © 2020 Thriftbooks.com Terms of Use | Privacy Policy | Do Not Sell My Personal Information | Accessibility Statement
ThriftBooks® and the ThriftBooks® logo are registered trademarks of Thrift Books Global, LLC