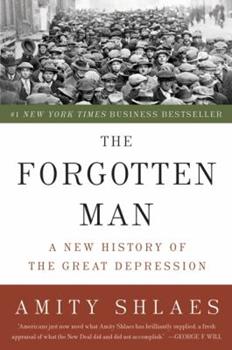 The Forgotten Man: A New History of the Great Depression

In The Forgotten Man, Amity Shlaes, one of the nation's most-respected economic commentators, offers a striking reinterpretation of the Great Depression. She traces the mounting agony of the New Dealers and the moving stories of individual citizens who through their brave perseverance helped establish the steadfast character we recognize as American today.

Published by Thriftbooks.com User , 15 years ago
The Forgotten Man (TFM for short) is not a polemic. It is not an argument for a particular theory or economic interpretation of the Depression. Instead, the author steps back and lets the story tell itself. She has sifted through memoirs and contemporaneous accounts in order to carry the reader back into the mindset of the 1930's. She focuses on a diverse selection of protagonists from that period, including opponents of Roosevelt like Andrew Mellon and Wendell Wilkie as well as members of Roosevelt's "brain trust" like Paul Douglas and Rexford Tugwell. Note that in the context of that time, "trust" meant the same thing as cartel (as in anti-trust laws). Roosevelt was claiming that with his advisers he had cornered the market on brains. If so, then after reading TFM, my sense is that there was not much value in this particular monopoly. I came away with three major conclusions. 1. For better or worse, much of the country saw the Depression as something akin to a natural disaster, and people accordingly lowered their expectations for their standard of living. 2. Economic ignorance among policymakers was much worse than I had realized. I was steeped in the myth that the reason the Depression was so bad was that only Keynes had the answer, and he had to overcome the resistance of "the classical economists," such as Irving Fisher. But the differences between Fisher and Keynes seem small when compared to the differences between the policymakers and both economists. In physics, it would be like watching an academic debate over the meaning of quantum mechanics while policymakers are unable to grasp the simple concept of gravity. 3. The struggle over economic policy in the 1930's was really an episode in the long, historical conflict between business participants in the market and anti-business academics. Roosevelt gave free rein to the professors, until the start of the Second World War led him to realize that he would need the tycoons to help mobilize to defeat Hitler. I suspect that one reason that Roosevelt and the New Deal come off so well in the conventional wisdom is that history books are written by professors, not by entrepreneurs. I should stress that these are my own views, and that TFM is much less prone to making generalizations and drawing conclusions. Readers with a variety of backgrounds and predispositions can appreciate the book and learn their own lessons.

Beware of the Elites

Published by Thriftbooks.com User , 15 years ago
Amity Shlaes has written an enormously important book. She offers abundant evidence that both the Republican Hoover and the Democrat Roosevelt unwittingly worsened the Great Depression. They opted for policies preventing the economic system from self-correcting. These two American leaders foolishly relied on the advice of elites infatuated with the Soviet Union. They essentially thought that the graduates of our best schools should manage the country. To be blunt, the elites were supposed to be our benevolent dictators. Pay particular attention to Shlaes analysis of the Schechter brothers' confrontation with intellectual thugs associated with Harvard University. The author never mentions the vastly overrated works of Arthur M. Schlesinger, Jr. Nonetheless, The Forgotten Man is something of a direct attack on the late historian's less than admirable scholarship. Did Franklin D. Roosevelt save our nation? He admittedly may have done so in our fight against the fascists during WW II. Roosevelt's attempts to manage the American economy, however, almost destroyed our democratic institutions. The road to hell is sadly often paved with good intentions. We should learn form history---and never let this happen again. Regular citizens must be willing to check and balance the behavior of those most inclined toward arrogant ego-tripping and power seeking. The Forgotten Man deserves three cheers. You should obtain a copy immediately.

Changes your understanding of the Great Depression

Published by Thriftbooks.com User , 15 years ago
Amity Shlaes: The Forgotten Man: A New History of the Great Depression HarperCollins, 2007, 433pp This is a remarkable book which will forever change your understanding of the Great Depression, Franklin Delano Roosevelt's role and the lessons to be learned from government intervention. Amity Shlaes makes a compelling case that Hoover and Roosevelt actually lengthened the Depression. They did this, Shlaes argues, by following bad monetary policy, which further deflated the currency, and by raising tariff barriers, which broke up world trade and reduced economic activity everywhere. Shlaes makes the best case I have seen that business confidence is the key to economic expansion and that each step of the New Deal was a further blow to business confidence. She also explains the view of the pre-government control entrepreneurs and investors who had created an extraordinarily successful country prior to 1929. This is a superb book well worth reading, studying and then thinking about for a long time.
Trustpilot
Copyright © 2022 Thriftbooks.com Terms of Use | Privacy Policy | Do Not Sell or Share My Personal Information | Accessibility Statement
ThriftBooks® and the ThriftBooks® logo are registered trademarks of Thrift Books Global, LLC