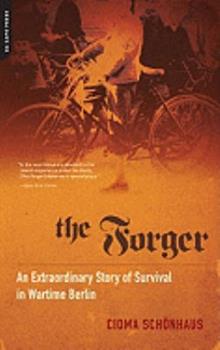 The Forger: An Extraordinary Story of Survival in Wartime Berlin

In Nazi Germany, twenty-year- old graphic artist Cioma Schnhaus found a unique outlet for his talent: he forged documents for people fleeing the Reich, ultimately helping to save hundreds of lives. Even as the Gestapo posted his photo in public, he lived a daringly adventurous life, replete with fine restaurants and beautiful women, all the while managing to elude the Nazis until he could escape in the most unlikely of ways--by bicycling to Switzerland...

This book is a good and worthwhile read

Published by Thriftbooks.com User , 13 years ago
When we exclaim that truth is stranger than fiction, it certainly is true in the book entitled The Forger, by Cioma Schonhaus. A gripping story of intrigue emerges from a placid beginning about a boy who grows into a heroic man in Nazi Germany. We soon become enmeshed into how some people survived and the methods they used to accomplish Herculean tasks which would seem impossible to accomplish today. Schonhaus was an art student before WWII intensified and his studies were stopped by the Third Reich. Events were so chaotic in the early days that his parents were removed from their home and sent to concentration camps without protest. Cioma was able to avoid deportation, and this is his story of survival. Living underground and yet in plain sight, he was able to aid hundreds of Jews by learning how to falsify documents and using talents mastered by him as an art student. Many of the documents he copied and where they came from make this story compelling. Church members would put their documents in collection baskets so they could be altered and used by Schonhaus to create new identities. These pious members would report loss of documents and be issued new replacements, but with the risk of certain death if caught for aiding Jews! None of them knew who the forger was so they could not be forced to turn him in as their only connection was through the church basket. Cioma tells of dating and eating out at the finest restaurants along with the hierarchy of the Nazi regime. His exploits of being in plain sight come to an abrupt halt when his identity is discovered and posters with his picture are posted all over Berlin. Still he continues his masterful plan after nightfall. An epic tale of forgery could have been the complete story covered by The Forger, but the captivating tale of his escape to Switzerland on a bicycle makes this even more adventuresome. Cioma with his own forged documents passes many check points and proves he is quite an adept con man as he makes his perilous journey to freedom. This book is a good and worthwhile read. Clark Isaacs Reviewer

Published by Thriftbooks.com User , 13 years ago
I thought this was a very good book to show how clever some people can be in the face of adversity. This young man outsmarted the Nazis at every turn and lived to tell t he tale. I lived in Berlin from 1965-1968 and I'm sure that is one of the reasons I can appreciate this young man's exploits so much. I have been to a number of the places he mentions and it brought back old memories. Good reading.

The most visible invisible man imaginable

Published by Thriftbooks.com User , 14 years ago
This is the breathtaking--literally breath taking--true story of the author's years living as an undocumented Jew in Berlin during the Nazi madness. Spared initially by his skilled-labor designation for work in a war factory, soon even that was not enough to save him from the order that he be evacuated to the East, code for the concentration camps. Already he had seen his parents, grandmother, and aunt and uncle off on the train. Thus, it is time for him to go underground. Underground, however, for Schonhaus does not mean invisibility. Indeed, he is the most visible invisible person imaginable, eating in restaurants packed with high-ranking Nazis, for example, on the theory that such would be the last place to look for a Jew. Theory is fine on paper, but in real life it takes either a madman or a fool. The author is a bit of both and lucky beyond reason. Trained as a graphic artist, Schonhaus is asked one day whether he can copy a Nazi stamp on some papers. He can, and soon he is working with anti-Nazi non-Jews and forging all manner of documents. Fully aware of what fate awaits him (and his colleagues) if he is caught, he carries on with almost youthful bravado. Indeed, it is this insouciance that is at the heart of his numerous heart-pounding near disasters and his brilliant bluffs that allow him to escape over and over again. Written decades after he lived the adventure, The Forger is a series of vignettes that concludes with Schonhaus's several-day bicycle ride in broad daylight down highways and through checkpoints--miles and miles and miles--from Berlin to Switzerland. He crossed that border in 1943 and still lives in that country. Steve McQueen could not have done it better, even with the motorcycle.

Published by Thriftbooks.com User , 14 years ago
Memoir of a Jew who survived on his wits in Berlin before making his escape into Switzerland in late 1943. He lived legally as long as he could, using an exemption as a worker in an essential war factory to stay in Berlin while his parents, aunt and uncle, and grandmother were all transported east; none returned. In his free time, he became the forger of the title, helping Jews to survive and escape with forged papers, until he made his own escape by riding out of Berlin in broad daylight on a bicycle, relying on his brazen ability to bluff his way past danger and on his impeccably forged papers. His story meanders free-form from incident to anecdote, with many small moments of verisimilitude. As a young man of 19 in 1941, Schonhaus spent much of his time thinking about, looking at, and chasing after women, and found surprising opportunities to consummate affairs with several different women of different ages and walks of life. His account of leaving his parents at the train station as they headed east to their death is heart-breaking in its quiet matter-of-factness. His father's voice stayed with him and helped him escape some of his tight spots during his life underground in Berlin and then during his final bike ride to safety. This will never take its place as a great book of Jewish perseverance during the Holocaust, but it should be read by those who treasure the small human triumphs that give us hope.

Published by Thriftbooks.com User , 14 years ago
Born in 1922 in Berlin, the man with the akward name Cioma, never knew that he would live one of the most fascinating lives under the Nazi regime, helping others, saving lives and fleeing to Switzerland on a daring bycicle ride. Altough he was scheduled to be deported he was a skilled worker at a munitions plant and this saved him. Time and again luck, perhaps stemming from the penny he kept in his pocket, saved him. This riveting narrative by the survivor himself keeps the reader wandering and worrying, fearing for the awful fate that might befall the narrator at any time. The book is a chronicle of a master forger and daring genious who set about creating ruses and brilliant escapes to foil the Nazis and save not only himself but others. Forging documents, moving from house to house under the very nose of the authorities this book offers a rare glimpse into life under the Nazi regime. It is also a story of how other Germans helped the author and how many risked their lives for him. A great tale of survival that will inspire many. Seth J. Frantzman
Trustpilot
Copyright © 2022 Thriftbooks.com Terms of Use | Privacy Policy | Do Not Sell My Personal Information | Accessibility Statement
ThriftBooks® and the ThriftBooks® logo are registered trademarks of Thrift Books Global, LLC