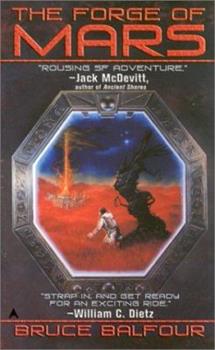 The Forge of Mars

NASA's made a monumental discovery in the caverns of Mars-alien artifacts that have already killed the first man who touched them. Now they're sending brilliant scientist Tau Wolfsinger to unlock the secrets of the artifacts. But Tau's in for a big surprise. And not just the one waiting for him on Mars.

A fascinating spider web of intrigue and action!

Published by Thriftbooks.com User , 18 years ago
Balfour has composed another intelligent and intriguing work of science fiction. His complex heroes, Tao and Kate, return with a host of creative new characters. The novel calls to mind the grandeur of the great science fiction authors without being derivative. This book is a true page turner; once picked up it cannot be put down. I would recommend it both to long term science fiction fans, who will find it a breath of fresh air from the cliches of the genre, and to new readers, who will find it a fascinating introduction.

Published by Thriftbooks.com User , 19 years ago
I just stayed up till dawn to finish THE FORGE OF MARS, and I am still reeling from this magnificent book. I loved the contrast of Navajo culture with the high-tech of artificial intelligence and nanotechnology, and I didn't want the story to end.In this book, Balfour creates a fully-realized world fifty years from now, with dark conspiracies behind the scenes and characters striving to come to grips with the modern world and forces beyond their control. The writing is extraordinary, compelling, and generates a sense of wonder. The stories of Tau, Kate, and Zhukov are exciting, disturbing, and enthralling. Balfour carefully lays out several different strands of story and then braids them together with unerring skill -- the kind of plotting that trips up a lot of writers but looks easy when done by a master. On the surface, it is a gripping adventure story; but it is much more than that, for Balfour regularly brings us face-to-face with the moral dimensions of his characters. We care about their world, their struggles, and Tau's efforts to unravel the great mysteries.I want more. Right now.

Published by Thriftbooks.com User , 19 years ago
I just finished reading "The Forge of Mars" by Bruce Balfour in about three sittings. I couldn't put it down. The story takes place in the near future. Two scientists, Tau and Kate, get caught up in political intrigue involving discoveries on Mars and their implications.Normally I don't care much for hard science fiction because sometimes the plot is just an excuse to describe scientific principles that go right over my head, but in this case the plot is super interesting, the characters are complex, and the science makes complete sense. The bad guy is fascinating (I'd love to see more of HIM), and the women are capable and strong without being masculine. Balfour is a great writer and I'm sure we'll hear more from him.

Published by Thriftbooks.com User , 19 years ago
Tau Wolfsinger is a brilliant, cutting edge scientist who works on Artificial Intelligence for NASA. He is unhappy because he can't get funding because he's too independent a thinker and the powers that be believe that Tau's ideas that an A.I. can build a city is to dangerous to explore. His personal life is going down the tubes as well with his fiancee Kate heading to Mars for a long time.Evidence of an ancient civilization has been discovered on the red planet and Kate is one of the archeologists going to excavate the site. Neither Tau nor Kate know they are being manipulated by a shadow government known as the Davos group who want to find out how these ancient artifacts can be used to further their goals. They believe Tau is the best person to figure out what these artifacts and portals are all about so they give the scientist the funding he needs providing he does the testing on Mars.Bruce Balfour does an excellent job of explaining the concepts of artificial intelligence, virtual reality and nanotechnology in layman's turns. His protagonist is a mild-mannered person who can play hardball when the situation warrants it. THE FORGE OF MARS is an action packed science fiction thriller that is a one sitting read.Harriet Klausner

Published by Thriftbooks.com User , 19 years ago
A near-future speculative fiction novel with a fast pace, well-drawn characters, realistic science, shadow governments, conspiracy, and a sense of wonder. If you mixed Ray Bradbury with Kim Stanley Robinson, shook them together with a dash of Robert Ludlum and a twist of Tony Hillerman, you'd have a novel in the style of The Forge of Mars. I particularly enjoyed the character of Kate McCloud and her inner journey that reflected the trials and tribulations of her outer journey as she moved from a sedate existence in San Francisco to an amazing discovery on Mars. I also enjoyed the detailed Russian background of General Zhukov. This kind of character development is sadly lacking in much of the speculative fiction I've read over the last few years, so it's refreshing to see a skilled new author who takes as much time with the characters as he does with the plot. I got my hands on an advance copy, but I'm buying more for my friends.
Trustpilot
Copyright © 2022 Thriftbooks.com Terms of Use | Privacy Policy | Do Not Sell My Personal Information | Accessibility Statement
ThriftBooks® and the ThriftBooks® logo are registered trademarks of Thrift Books Global, LLC