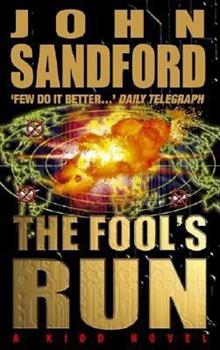 (Book #1 in the Kidd and LuEllen Series)

by John Sandford and John Camp

This description may be from another edition of this product. John Sandford , the #1 New York Times bestselling author of the Prey novels gives suspense an ingenious twist as he takes readers into the mind games of two irresistible con artists plotting the...

Published by Thriftbooks.com User , 17 years ago
This is an excellent mystery/thriller from John Sandford (of Prey Series fame). The main character here is Kidd, a professional painter and sometime computer criminal. His burglar partner -- in more ways than one -- is the beautiful and enigmatic LuEllen. The plot is absorbingly full of clever turns, and the characters are well drawn. It is admittedly a bit dated, but don't let that stop you. You'll be hooked into all of the Kidd books. If you haven't read the Prey Series, I urge you to start at the beginning (Rules of Prey) and read them in order. If you are a Michael Connelly or Dennis Lehane fan, you need to read Sandford.

It actually ages quite well...

Published by Thriftbooks.com User , 17 years ago
I just finished The Fool's Run by John Camp, better known now as John Sandford (author of the Prey series). This was originally written back in 1989, and revolves around computer hacking. You're probably thinking "a hacking story in 1989? Quaint!". Don't feel bad. I thought the same. But much to my surprise (and delight), it aged well...The main character, Kidd, is a painter who is also a hacker for hire. He's been known to pull some jobs that have kept him comfortable. He's approached by a company who claims that their fighter jet plans were stolen by another competitor, and they want Kidd to scramble the competitor's records so that they can't gain a lead in the government bidding for the plane contract. But after Kidd pretty much destroys the company, he finds out the story is not quite what he was led to believe. And now, someone's out to kill him to tie up that loose end.While much of the hacking involves mainframes and computer terminals over dialup lines, it isn't entirely juvenile. The hacks are typical for that time frame, and the story surrounding the action is well done. Maybe its because I remember those days of mainframe and dialup terminals, but I really liked this book. My kids probably wouldn't relate, but old techno-geeks like me will understand and smile...

Published by Thriftbooks.com User , 18 years ago
I do not share the disappointment expressed by some of the earlier reviewers, perhaps because I do not read many novels and this was my first exposure to John Sandford. In any event, I found this "airplane book" so interesting that I made time to finish it once I got home.The integration of several sub-plots, the detailed portrait painted of the primary character, the ins and outs of planning the destruction of a corporation, and the final surprise ending, very much an "out of the box" solution for an impossible situation, gave me great satisfaction, to the point that this author joins Robin Cook, Dick Francis, and Michael Creichton as a trusted provider of light entertainment.

THe First two thirds were good. the last third was great.

Published by Thriftbooks.com User , 23 years ago
I really enjoyed this book. AS Kidd gets his assignment, hires Luellen and Dace, and begins his project, it is just fast enough to keep you interested.Then, right around the time Dace dies, it really picks up. THe plot centers around this Tarot-reading, Computer-hacking painter who is hired by a military defense company to sabatoge another company's computer systm. This book was areally good read and I can't wait to read 'the empress file'

An enjoyable thriller that you really can't put down.

Published by Thriftbooks.com User , 24 years ago
This was the first John Sandford book I have read and I am only sorry that I was not aware of this author sooner. I hate to use the cliche that the book is a "can't put it down" type thriller, but I don't know how else to describe it. Until I finished it, I wasn't getting any work done. This is a book that you can lose yourself in. It's not a great work of literature but it sure is enjoyable. I liked the computer theme that the author used and my guess is that since you're reading this review on-line, you would probably be similarly intrigued. The book would make a great movie
Copyright © 2020 Thriftbooks.com Terms of Use | Privacy Policy | Do Not Sell My Personal Information | Accessibility Statement
ThriftBooks® and the ThriftBooks® logo are registered trademarks of Thrift Books Global, LLC