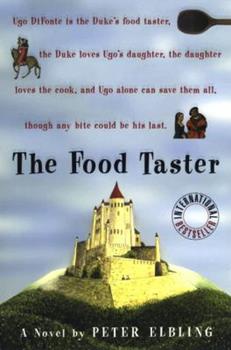 When Ugo DiFonte and his teenaged daughter Miranda are snatched from their farm and spirited away to Duke Federico Basillione DiVincelli's estate, Ugo thinks life can't get any worse...until he is... This description may be from another edition of this product.

Published by Thriftbooks.com User , 15 years ago
An innovative, sasy memoir of Ugo Difonte, a food taster in 16thc Italy; Ugo is unwillingly pushed into the service of a deliciously devious Duke. He manages in a most unwitting comical manner to prosper in his new position, until his attractice yet catty daughter, Miranda's love life adds more twists and bends to his always-precarious position. Caught between her desire to play the Duchess after catching the eye of the enormously stout and egotistical Duke DiVincelli and her more than flirty adventures with the palace cook Tommaso, Miranda contininually uses her father's devotion to burn both ends of the candle. Ugo is constantly struggling between his appalling family ties (a wicked, immoral brother who incessantly haunts him), and his own rollicking affairs of the heart and a tremendous series of witty and brilliant scenes......Just to catch his breath and live to tell his tale...whew. Elbling's usage of the little known world of the medieval food-taster brings a genuine freshness to the genre. His characters are so charmingly eccentric it's a maze worth wandering through to the end of this original and atypical historical novel's ultimately frenzied conclusion.

Published by Thriftbooks.com User , 16 years ago
This could have been an instruction booklet on how to survive the Italian Renaissance. The main character is a delightful rascal who kept me laughing as well as amazed with his "sleight of hand" tricks of survival. If you love (1) historical fiction, (2) well written characters, (3) a story that keeps you up past midnight because you can't put it down, and (4) enough humor to bring tears to your eyes...this book is the ticket.

Published by Thriftbooks.com User , 17 years ago
Loved it! Ugo and Miranda are kidnapped by the duke and taken to his palace. Ugo works as a food taster, replacing Lucca - who has just been killed. He makes friends with a lad called Tommaso (who later has an enchanting romance with Miranda). He falls in love with Agnese, who falls pregnant and dies...blah blah blah. One really has to read the book for oneself. It is awesome...something that words can't elucidate. It's one of the best fictions I have yet come across. I recommend "The Foodtaster" to anyone looking for a good fiction. The storyline is unpredictable. Each chapter is thrilling to read and filled with suspense and adventure. Ugo is a character with foibles and flaws, which makes him very much human and easy to relate to. Indeed, this duality of fiction and realism is what livens up fiction novels. Chapter 26 reminded me of "The DaVinci Code". I was hence forced to compare and contrast the two fictions. There is simply no comparison. "The Foodtaster" has a stronger, more solid plot. So, "The DaVinci Code" simply pales in comparison, in case you've read it before. The novel has sprinkles of twists every now and then that make it even sweeter - not like those found in other obnoxious fictions though. This novel is simply a joy. They don't write them like this these days.

Published by Thriftbooks.com User , 18 years ago
Imagine graduating from starving peasant, to someone who suddenly sees more food for one meal than he'd ever seen in his life. Now, imagine that you can't enjoy this for one moment, because every bite might be your last. This is "The Food Taster," and I'm pretty sure that the folks on the plane thought I was crazy because I kept laughing out loud.This is a wonderful portrait of a transitional period in the Italian Renaissance, as well as a sometimes surreal and dark tale in a voice so memorable that lines will pop into your head for days after you finish reading. For those whose mouth water at some of the meal descriptions, there's even a collection of recipes in the back!

Published by Thriftbooks.com User , 19 years ago
If you've an appetite for a richly imaginative, ribald and riotously funny tale, "The Food Taster" is your dish. We learn in the foreword that while visiting a Tuscan village some five years ago translator Elbling befriended an old rogue who soon died. Found in the departed's possessions was a yellowed manuscript which was given to Elbling. Upon returning to the U.S. Elbling consulted rare book experts and learned to his amazement that the manuscript was authentic. Since he is a bit of an Italophile he decided to translate the manuscript himself, and publish it for our pleasure. Are we to believe this yarn? Only if we're very gullible. Yet, Elbling presents his "find" with such persuasiveness and charm that readers tend to forget that it is a product of a fertile imagination with a camera's eye for period detail and unerring ear for authentic dialogue. The "long hidden manuscript" is the biography of Ugo DiFonte, who is by turns audacious, foolhardy, pitiful, and laugh-out-loud funny. A poor Italian peasant Ugo lived in 16th century Italy with his young daughter, Miranda. Just when life could not possibly take a turn for the worst the pair are torn from their hard scrabble farm by a portly, ignorant dictator, Duke Federico. Ugo soon learns that he is to be the Duke's food taster, a position now vacant since his predecessor's tongue was cut out as punishment for inefficiency. In order to survive Ugo quickly learns the tools of his new trade: antidotes, poisons, and the taste of every herb, meat, sweet, and vegetable that will be served at the castle. Thus, a man who was quite recently starving is now forced to taste glorious food, but he cannot enjoy it. On top of the dire machinations steaming from the castle's kitchen Ugo must also try to keep his willful and more-beautiful-each-day daughter in line. That in itself would be a 24/7 job as she is soon the object of lascivious stares and courted by young Tommaso, a kitchen helper who aspires to be a chef. However, when push comes to shove Ugo is able to drive all feelings of romance from Miranda's heaving young bosom with a potion of "the juice of an apple mixed with the powder of a dead frog." Despite the plague sweeping throughout the country, an evil brother who would destroy him, and sundry threats to his person the widowed Ugo is able to find love from time to time. First, there is Agnese, a washerwoman from Bosnia, and then the fair Helene. Will the beleaguered Ugo ever find happiness? Such a life.......such a story.....such an entertainment! - Gail Cooke
Copyright © 2022 Thriftbooks.com Terms of Use | Privacy Policy | Do Not Sell My Personal Information | Accessibility Statement
ThriftBooks® and the ThriftBooks® logo are registered trademarks of Thrift Books Global, LLC