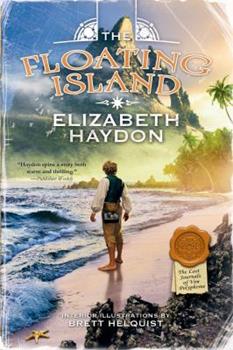 (Book #1 in the The Lost Journals of Ven Polypheme Series)

The Floating Island, the first volume in Elizabeth Haydon's critically-acclaimed The Lost Journals of Ven Polypheme series for middle grade readers, is now available with a stunning new cover Charles Magnus Ven Polypheme--known as Ven--is the youngest son of a long line of famous shipwrights. He dreams not of building ships, but of sailing them to far-off lands where magic thrives. Ven gets his chance when he is chosen to direct the Inspection of...

Published by Thriftbooks.com User , 15 years ago
If I had a little boy, this would be the book I would be reading to him at night. One chapter at a time. In fact, if I had a little girl this would be what I read her! Each chapter is the perfect mini adventure, often with a suspenseful ending. Pirate attacks, mermaid rescues, mysterious islands...all in the first few chapters. But I have no kids, so instead...I am reading it to myself before bed, and loving every twist and turn.

The BEST in a long, long while

Published by Thriftbooks.com User , 15 years ago
I bought two books two weeks ago--this one and another I shall not name here that came out on the same day. The latter, while highly promoted and hyped. was a piece of trash. This book was absolutely fantastic. The author is a wordsmith of the highest order, and while I have not read her other books, I will now. The dialog flows beautifully, the characters are perfectly drawn, but most importantly, the story is AMAZING. Ven Polypheme, the young Nain hero and 'author' of the lost journals, may be the best first-person hero ever in fantasy. Ven has all the best characteristics of an adventurer, endless curiosity, modesty and honesty, without any ridiculous powers or bravery beyond that of any other human being, blah blah. The world he travels through is full of magic and danger, beautifully drawn by Haydon as if she were an artist painting a masterpiece on canvas. Whether or not you like fantasy, I highly recommend this book and yes, I have actually read it. The humor in it is perfect and will appeal to kids from 1 to 92.

A Classic in the Making

Published by Thriftbooks.com User , 15 years ago
This book will grab you from the very first page, and will not let you go until the last past page has been turned. It will be a classic, a legend of one of the very best Young Adult adventure stories to exist. It is profoundly good, extremely well written, and immerses you into a world of lovable characters, creative worlds, and blends action, adventure, magic and horror in a unique and creative way. With an elusive and strange Albatross, a wise-cracking mermaid with an attitude, a Jules-Verne-like mysterious island, one heck of a big ship-eating shark, fire throwing pirates, a sweet and friendly ghost, and whole host of good guys and bad, this is one exciting book! I am so eager to read the next installment of Ven's adventures and hope that this series will be at least a trilogy if not more of an ongoing saga. Two thumbs up, five stars, just wonderful!

Published by Thriftbooks.com User , 15 years ago
Charles Magnus Ven Polypheme feels like an outsider amidst his extended family. While his generational heritage is with ship building as he is an offspring of renowned shipwrights who prefer to stay home, he figures he must be adopted as he dreams of sailing. Considered of an age and experience to head the quality insurance of the latest vessel, Ven begins his inspection. However, before he can complete his task, fire pirates attack his ship. Ven barely survives and only because the crew of another ship traveling the Island of Serendair rescue him. Ven is thankful to not only have a little magical adventure but unbeknownst to him he is the center of a conspiracy that started with the piracy raid. Unknown assailants believe Ven can lead them to the uncharted Floating Island where they can obtain the Water of Life; if his family, friends, and workers must die so be it. Ven's journal entries and sketches found centuries later by archeologists make THE FLOATING ISLAND seem genuine though it is a sword and sorcery tale. The story line is action-packed as Ven relates his first adventures years before he becomes famous for his classic later works The Book of All Human Knowledge and All the World's Magic. Readers will appreciate this coming of age story as the look back by archeologists at the "authentic" persona and events make the realm of THE SYMPHONY OF AGES series setting real inside a fun fantasy. Elizabeth Haydon is at the top of her game with this superb sword and sorcery "historical". Harriet Klausner

A soarkling, magical CLASSIC for young and old alike

Published by Thriftbooks.com User , 15 years ago
I got an advance copy of this book at a recent library meeting, along with several others, and read it cover to cover on my way home on the plane. And in the cab. And once I got home, to the annoyance of my wife and kids, until it was done. This book is amazing. Finally there is a new Young Adult classic in the making that really captures the magic of storytelling. I haven't been this excited by a book since the first Harry Potter, and readers who enjoy that series will love this one. Young Ven Polypheme is a boy itching for adventure, even though he is from a race of people that hate to travel and like to keep to themselves. He gets his wish in an unfortunate way, following a spectacular pirate attack, and finds himself in the midst of a magic-filled and threatening world of gigantic sharks, floating islands, gypsy-like Rovers with secret boxes, spice folk, mountains that act as guardians, ghost wolves and an endless amount of danger and intrigue. Haydon's world, an earlier era of the masterful creation in which her adult series THE SYMPHONY OF AGES is set, is so real that one can almost believe that archaeologists really DID find these ancient journals from a more magical time in history, as she claims. I am especially impressed with the characters in the book. Ven is a terrific hero, plucky and curious but with many of the doubts and issues of a real-life teenager. He and the other young characters in the story are complete people, with flaws and strengths and the ability to screw up, as well as to come through heroically. The girls in this tale are especially wonderful; for all that I love Harry Potter, it suffers from a lack of interesting female characters other than Hermoine. Haydon treats us to a host of them, from a mermaid-like creature called a merrow who has a sea-dweller's odd perspective on the world, to a snotty thief, a boisterous den-leader type and a tiny, shy creature who speaks by making flowers grow. The boys are awesome as well; I'm very fond of the cook's mate, Char, who has a miserable life and really resents anyone feeling sorry for him because of it. The messages in this book are some of the healthiest I've seen in a long time, but they don't compromise the sheer fun of the story. This is an utterly wonderful book, and I cannot wait to read the next one. With any luck, it will fill the void that the upcoming ending of the Harry Potter series will leave with a story every bit as compelling.
Copyright © 2022 Thriftbooks.com Terms of Use | Privacy Policy | Do Not Sell My Personal Information | Accessibility Statement
ThriftBooks® and the ThriftBooks® logo are registered trademarks of Thrift Books Global, LLC