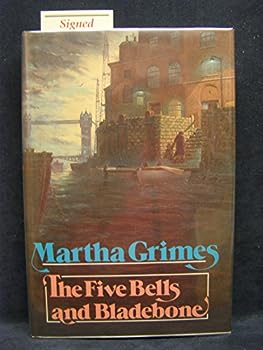 The Five Bells and Bladebone

(Book #9 in the Richard Jury Series)

This description may be from another edition of this product. When a dismembered corpse is found in the compartments of an antique secretaire a abattant, Marshall Trueblood, recipient of the precious piece of furniture, is the first to protest: "I bought the...

IT'S THE PIG'S FAULT

Published by Thriftbooks.com User , 18 years ago
Martha Grimes writes a darned good mystery, but then again, so do a lot of other folks. So why do I keep coming back to her books when there are so many other good mysteries out there begging to be read? Well, let me try to figure it out. There's Richard Jury of New Scotland Yard and his friend, and unofficial fellow mystery solver, Melrose Plant, the former Earl of Caverness (former because he has renounced the title just because he doesn't want it). Together, they make a pretty good crime solving duo. But then again, so do Holmes and Watson, or Batman and Robin, or even Nick andf Nora of "Thin Man" fame, but it's to Jury and Plant that I keep returning. Why? The truth is that Ms. Grimes has surrounded them with some of the most colorful characters in modern mystery fiction.Before I discuss a few of my favorites, I'd better reveal a bit of the plot of THE FIVE BELLS AND BLADEBONE. To start with, a piece of antique furniture in the town of Long Piddleton, home to Melrose Plant and many of the other "regulars," is found to contain a dismembered body. Elsewhere, the body of a murdered London woman is discovered. Although it is not evident, Richard Jury believes that there is some sort of connection between these seemingly unrelated murders. He takes it upon himself to determine whether or not these murders are related to one another, and to find out who committed the murders. Obviously, this is a simplified description of the plot.Before going on to my real reasons for loving Martha Grimes' novels, I do have to tell you that Richard Jury and Melrose Plant are real, lively, and interesting characters who are worth reading about on their own. They have distinct personalities, problems, etc., and it is rewarding to get to know them.For starters, there's Jury's official aide, Detective Sergeant Wiggins. Wiggins is a walking pharmacy. He knows, as surely as he knows that sea air is poisonous, that he is going to fall seriously ill in the next minute. Any air he breathes is fraught with murderous bacteria and virus. He breaks out if it's dry and wheezes if it's damp. He sneezes if it's spring and coughs if it's fall, but never fear, he has pills and potions, nostrums and salves, inhalants and something called "fishermen's friends" in one pocket or another. He takes them all, too. In spite of his hypochondria, he is an outstanding policeman with an analytic mind and an ability to take unimpeachable notes.Then, in Long Piddleton, there's Melrose's friend, Marshall Trueblood, antique dealer and a frequent partner in Melrose's pranks. Marshall dresses with a flair, in pinks and purples and mauves, in the finest silks and satins, and is rarely without a colorful scarf to set off his sartorial elegance. These clothes are the products of the finest (read expensive) tailors and designers that London has to offer. In this book, when an antique secretaire a abbant (desk to us commoners) he has purchased turns out to contain a dismembered bo

Published by Thriftbooks.com User , 19 years ago
Antique dealer Marshall Trueblood is delighted when he coaxes Lady Sommerston into selling her secretaire a abattant--at least until it arrives at his shop and vents forth the severed head of a man with more enemies than even Superintendant Jury of Scotland Yard can count. And the ensuing investigation proves problematic in more ways than one.As usual, Martha Grimes writes beautifully, presenting us with a host of likely and unlikely suspects ranging from an eccentric romance novelist to a near-hysterical book dealer to a woman who greatly enjoys her dubious reputation--and considerable humor in the form of Aunt Agatha, a plaster pig, a bicycle, and chamber pots. But fascinating as her prose is, the sheer complexity of her story seems to run away with her in this particular novel, which piles character upon character and event upon event in a truly dizzying sort way.Perhaps more to the point, this particular work deals with the thematic thread of to what degree we actually know people as individuals, the plot relies heavily upon coincidence, and Grimes juggles a great many balls to conceal the killer's hand. Whether or not readers feel these balls all fetch up together in logical order is a matter of opinion; clearly some consider this one of her most spectacular finishes while others find it frustratingly vague. For myself, I found the novel requires more concentration than one expects of a murder mystery, and while I thought the device was very clever I felt the conclusion lacked drama and consequently doesn't entirely come off. While I do recommend the novel to long-time Martha Grimes fans, I would hesitate to recommend it to newcomers, who might find BLADEBONE's deliberate ambiguity a bit off-putting.

Grimes is at her best in this one!

Published by Thriftbooks.com User , 20 years ago
Martha Grimes certainly has made Richard Jury a household name of British police procedurals, and of all the Jury novels, "The Five Bells and Bladebone" is the best. The author's penchant for local color, extreme suspense, wonderful anecdotal treats, and mesmerizing plot all abound in this episode. Readers and fans won't be disappointed.All the excitement begins with the very first page. With the opening "harrative hook" that she uses, Grimes has the reader "trapped." "What else could you think of but getting your throat slit?" she asks on page l. And who wants to stop reading until the final page? Marshall Trueblood (one of Grimes' "standard" characters and resident antiques dealer in Long Pidd) discovers a dismembered corpse in an antique escritoire! No mean feat here! And, of course, Superintendent Jury soon establishes a connection between this death and the murder of a Limehouse lady named Sadie Driver. With his faithful Sergeant Wiggins, Jury begins to do what he is best known for: solving crimes. And no Jury book would be complete without close friend Melrose Plant, the aristocratic and (de)titled Peer, whose insight, connections, wealth, good wit (he does the London Times crossword in record time, whether the answers are correct or not!), and his Aunt Agatha, is of immense aid to Jury. "The Five Bells and the Bladebone" is not a book to miss.

The bells toll for thee in this Grimes thriller!

Published by Thriftbooks.com User , 21 years ago
Of all the Richard Jury-featured novels, I think that "The Five Bells and Bladebone" if by far my favorite. How can one resist such an opening when Martha Grimes launches us into her ninth Jury episode with this sentence: "What else could you think of but getting your throat slit?" Grimes' penchant for landscape and atmosphere holds true in this book. "It was a twenty minute walk from the flat in Limehouse to the Town of Ramsgate, and she was irritated that they'd decided on what he called a `dress rehearsal....hadn't they been over it and over it? And she didn't dare tell him that Tommy was coming in tomorrow night. He'd have killed her." Is this the quintessential narrative hook or not? And Grimes doesn't let up until the final pages. Marshall Trueblood (one of Grimes' recurring characters and resident antiques dealer in Long Pidd) discovers a dismembered corpse in an antique desk. Superintendent Jury soon establishes a connection between this death and the murder of a Limehouse lady named Sadie Driver. With his faithful Sergeant Wiggins, Jury begins to do what he is best known for: solving crimes. And no Jury book would be complete without close friend Melrose Plant, the aristocratic and (de)titled Peer, whose insight, connections, wealth, good wit (he does the London Times crossword in record time, whether the answers are correct or not!), and his Aunt Agatha, is of immense aid to Jury. Grimes titles her Jury books with names of actual pubs. If you track this one down (there's a good map in the book), be careful! It really is in a section of London that should make you think twice before going--I chose noon on a Sunday and STILL was intimidated, getting my pint, quickly swallowed, and OUT of there! (Actually, it is an unassuming pub with lots of character--it's just that the locals NEVER cotton to outsiders, especially foreigners! But the ale was good! Grimes told me last October, however, that the pub had actually undergone some renovation!) Regardless, for the many fans of Grimes/Jury, "The Five Bells and the Bladebone" is not one to miss. It's my cup of tea (or pint of ale!).Billyjhobbs@tyler.net

Published by Thriftbooks.com User , 21 years ago
I find it a bit disappointing that some folks were disappointed in this book. It is not the best of the Richard Jury novels, but it does represent a turning point in Martha Grimes' writing style. She's playing with the idea of the doppelganger here and alternating points of view. The ending is ambiguous, on purpose. Grimes was playing around with reality and perception here as well as the question, "how well do we know the people we love?" Her portrayals of Lady Summerston and Sadie's brother are poignant and she is experimenting with the idea that murder is not always clear cut and even the best and brightest can be stumped. She learned from writing this book and when read in relation to the others in the series one can see her growth as a writer here. After this book Ms. Grimes plays with alternate points of view in every novel, underscoring the idea that everyone perceives the world differently. Give Five Bells a second try and it may make more sense.
Copyright © 2020 Thriftbooks.com Terms of Use | Privacy Policy | Do Not Sell My Personal Information | Accessibility Statement
ThriftBooks® and the ThriftBooks® logo are registered trademarks of Thrift Books Global, LLC