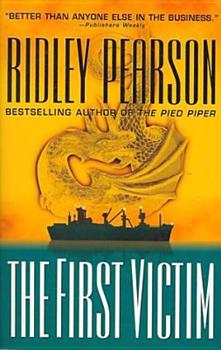 (Book #6 in the Boldt & Matthews Series)

Lieutenant Lou Boldt, the Seattle cop who stars in Ridley Pearson's deservedly popular series, is a sharp and touching figure--perhaps the most believable police officer in current fiction. Early in this ninth book about his public and private life, Lou has to put on a bullet-resistant vest to lead a raid against some dangerous criminals. "The vest was not physically heavy, but its presence was," Pearson tells us. It meant battle; it meant risk. For...

Published by Thriftbooks.com User , 21 years ago
Ridley Pearson reminds me of James Mitchner: he always does his homework. His latest work is another winner. "The First Victim" exposes the horrifying ordeal many endure to gain their freedom through a yarn involving my favorite detective, Lou Bolt. Centering on the expoitation of illegal aliens, Bolt and company work smart and fast in spite of the beauracracy and hidden agendas around them. This episode isn't as heavily entrenched in forensics as previous works but a few new scientific tools are employed to keep pace with the hunt. Instead, Pearson concentrates on the frequent conflict between the media and police along with span of control issues whenever the Feds are involved. This is "bigger" than the regular Lou Bolt yarn because of the type of story it is. Overall, it represents a nice change of pace. Loyal Pearson followers will see their favorite players but the storyline doesn't dwell on them as much as previous works. That seems to work well too. It must be hard to keep storylines fresh when an author does a series around the same central characters. Pearson does the job and then some.

Great book to take with you on vactation!

Published by Thriftbooks.com User , 21 years ago
As with all of Ridley's books, this was a winner. I really have enjoyed all of the Lou Boldt-Daphne Matthews series and this one was no exception. I recommend reading them in order though. I think you get a real sense of the characters and their problems and growth, by reading them in order. Highly recommended.

The First Victim is First Rate

Published by Thriftbooks.com User , 21 years ago
I first met Lou Boldt in The Pied Piper and then backtracked in our relationship by reading No Witnesses and Beyond Recognition. When I like a book series I usually read in groups of three and then take a year off.I'm glad I didn't follow my rule with this Ridley Peason novel. It was a great read and I find myself looking forward to Middle of Nowhere. This is a first for me--five series books in a row without a significant break. And, you should know, that as a former English teacher I am very picky. Here are the top three things about The First Victim:1. Lou Boldt continues to be incredibly believable. I have a good friend who is a homicide detective in Washington State. Lou Boldt is so much like him that it's uncanny. His strained yet loving relationship with his wife adds deeper truth to the police procedural genre. I can personally vouch for Lou Boldt's feelings about his wife's recovery from cancer. They are real. Anything but cliche.2. There is plenty of action in this novel, but the book never falls prey to the kind of trite, police stereotypes that litter most novels of this type. Boldt's friend and subordinate LaMoia comes the closest to a two dimensonal character, but the fact that he is the only one makes him unique.3. The addition of the Stevie McNeal, the headstrong TV anchor, gives the novel a new direction. I am glad that Pearson gave the Daphne Matthew's/Boldt attraction a bit of rest.

A Crime Thriller for the Mind

Published by Thriftbooks.com User , 21 years ago
First Victim is an extremely well written and fascinating story dealing with illegal immigration, sweat shops and prostution. This is not a book to read if you are looking for blood, gore, lurid desciptions of torture victims, etc. it is a book that deals with the mind, strategy, trying to outthink the criminal as well as all the politics that go on behind the scenes of government agents - the in-fighting for credit, the hestitancy to work with each other or at least share information, the struggles of the police to make sure that they do everything within the law so that the criminal doesn't end up back on the street, and corruption. It is a treat for the mind. Ridley Pearson has given the main character Lou Boldt, police detective, a very well rounded character who tries to find balance between his love for his work and his love for his family. The other equally prominent characters of Daphne Matthews psychologist, Sergeant John LaMoia, and Forensic expert Bernie Lofgrin give the story added spice skillfully because of their extremely opposite personalities yet they blend well and compliment each other. The story line flows very well so there is no getting lost between one chapter and the next as can happen so easily in a thriller. One part of the thrillers I have always found fascinating is the forensic area of police work because no true police thriller is complete without it. Ridley Pearson has found a good balance in this area, there is enough detail when forensics is used in the book to keep someone fascinated in the area interested but won't turn off the reader who isn't and has it dispersed throughout the novel which adds to the suspense. This novel deals with the human spirit, the dark side of immigration, corruption and love. This was not the first Lou Boldt novel I have and most definitely will not be the last.

Published by Thriftbooks.com User , 22 years ago
I always look forward to Ridley Pearson books, particularly the Lou Boldt series. Wonderful characters and always a mesmerizing plot. The First Victim focuses on the illegal immigrant trade and shows us what their plight might be when hitting the shores of the country whose streets are paved with gold. Also a fascinating look at the press/news media and how it can either assist and defeat the best interests of all involved in this thorny problem.This author just keeps getting better and I always look forward to his new books. He never fails me and is among my favorite authors.
Copyright © 2020 Thriftbooks.com Terms of Use | Privacy Policy | Do Not Sell My Personal Information | Accessibility Statement
ThriftBooks® and the ThriftBooks® logo are registered trademarks of Thrift Books Global, LLC