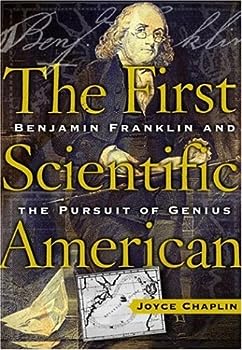 The First Scientific American: Benjamin Franklin and the Pursuit of Genius

Famous, fascinating Benjamin Franklin--he would be neither without his accomplishments in science. Joyce Chaplin's authoritative biography considers all of Franklin's work in the sciences, showing... This description may be from another edition of this product.

Published by Thriftbooks.com User , 15 years ago
THE FIRST SCIENTIFIC AMERICAN: BENJAMIN FRANKLIN AND THE PURSUIT OF GENIUS comes from a history professor at Harvard, who shows how Franklin's evolving status as a scientific genius lends to appreciating his works and the evolution of science as a whole. There have been many biographies of Franklin over the years; but this is the first to narrow the focus on his scientific investigations and how they led to his political prominence. All of his scientific research is considered, linking science works with problem-solving at the social and political levels. New research into documents from his early career and those of his colleagues lend to a unique discussion here. Diane C. Donovan California Bookwatch
Trustpilot
Copyright © 2022 Thriftbooks.com Terms of Use | Privacy Policy | Do Not Sell My Personal Information | Accessibility Statement
ThriftBooks® and the ThriftBooks® logo are registered trademarks of Thrift Books Global, LLC