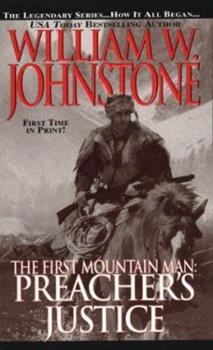 (Book #10 in the The First Mountain Man Series)

Employing his survival skills, Preacher, the first mountain man, leaves his home in the Rocky Mountain range to avenge the death of a woman from his past, in this thrilling novel that details the origins of the legendary Preacher. Original.

Preacher - Jennie killed and he visits his family

Published by Thriftbooks.com User , 13 years ago
This is another of the "can't put it down" books by William W. Johnstone. How that man can write! In this story, Preacher is on his way back to St. Louis, where Dog has been guarding Jennie. He arrives to learn that Jennie was killed to keep her from talking about the swindle which Epson did to her. The killer Epson hired was named Caviness. Preacher (Art) sets out to find Epson, who has moved to Philadelphia where he has an excellent position with a much-larger bank than had employed him in St. Louis. On the way, he stops at his family's farm, to learn his father has a mortgage which must be paid very soon and there is no money to pay it. We learn Art's last name is Coopersmith. He pays the mortgage, in the process teaching the banker and his thugs a harsh lesson, and tells his father that the farm should go to his brother, Morgan, who stayed home and worked hard while Art "went to see the Creature". He tells his father that he believes he did see it, and that he is happy with his life out West. Tracking down Epson and Coopersmith in Philadelphia, Art kills Caviness after the criminal kills Epson. A very-engrossing tale, and almost every page has excitement and intrigue.

Published by Thriftbooks.com User , 15 years ago
The service in receiving this book was as promised. The book itself was excellent, although later in the series it is changed some what. All in all it was an excellent book.

Published by Thriftbooks.com User , 16 years ago
A great story with lots of events and a great mix of characters. Hard to put down but there is enough seperate events to make up a series in a single volume.
Copyright © 2020 Thriftbooks.com Terms of Use | Privacy Policy | Do Not Sell My Personal Information | Accessibility Statement
ThriftBooks® and the ThriftBooks® logo are registered trademarks of Thrift Books Global, LLC