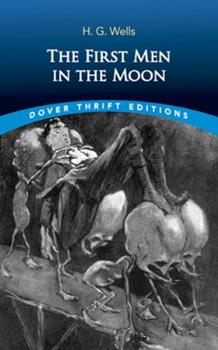 The First Men in the Moon

Of the enormous body of work produced by H. G. Wells -- more than a book a year over the course of half a century -- the early science fiction novels that first made him famous have proved to be the most enduring and have earned him the sobriquet "the father of modern science fiction." In the 1901 classic The First Men in the Moon , Wells reveals not only a fertile imagination at ease with biological and astronomical phenomena, but also a passionate...

A fun read, and a fascinating sci-fi book

Published by Thriftbooks.com User , 17 years ago
When the young and penniless Mr. Bedford meets an eccentric scientist, Mr. Cavor, who doesn't realize the importance of his own inventions, it seems most fortuitous. Of greatest interest is Cavor's realization that he can create a substance that shields against gravity. Together, they come to the conclusion that, with this new substance, they can make ships to take them to other planets within the solar system. And so, with Cavor dreaming of scientific breakthroughs and Bedford dreaming of wealth, the two build such a ship, and set off for the Moon.Arriving at the Moon, the two quickly realize what a strange and amazing place it is. During the lunar day, there is a breathable atmosphere on the surface of the Moon, and their investigations soon demonstrate that the Moon is inhabited by a race of intelligent beings. An insectoid race, the Selenites (or "Moonies" as Cavor whimsically dubs them) have a highly-organized caste system much like terrestrial ants. Can our heroes escape from the Selenites and return to Earth? And, what are the long-term affects of this new meeting of societies going to be?H.G. Wells (1866-1946) is often remembered for his late-nineteenth century science-fiction, including The Time Machine, The Invisible Man, and The War of the Worlds. This book was first published in 1900, and shows a different side of Wells. Whereas his earlier book were rather preachy, this book is more light-hearted, telling a cracking good story for its own enjoyment, rather than being a vehicle to teach a lesson.Yep, this is a fun read, and a fascinating sci-fi book. As might be expected from such an old book, the "science" that Wells used is extremely out of date. But, if you are willing to practice a little suspension of disbelief, you will be treated to an excellent story. The story hangs together well with then current science, and shows you science-fiction from an entirely different angle. I really enjoyed this book, and highly recommend it to you.

H.G. Wells at his best

Published by Thriftbooks.com User , 19 years ago
The title seems a little strange, but the Moon as imagined by Wells is inhabited by creatures living underground--thus, the title. The plot is typical of the author--a seemingly normal man happens to meet a man with strange scientific ideas, and he quickly finds himself an active participant in the grand designs of his new acquaintance. Mr. Bedford, our narrator, escapes to as quiet and isolated a space as he can find in order to write a play. His hideaway is visited every night by a strange little man with a penchant for humming. Accosting the man for his nightly interruptions, he learns that the man, Dr. Cavor, is a scientist working to find a means by which to nullify gravity. Seeing the possibility of great profit from such a discovery, the narrator quickly enlists as a scientific assistant. The serendipitous discovery of Cavorite results in the scientist's home being destroyed and the surrounding countryside buffeted and damaged by powerful winds. With the discovery now made, Cavor embarks on a monumental quest to reach the moon by creating a huge sphere--a coating of Cavorite provides the means of locomotion, and a complex system of blinds serves as the means for controlling the thing. With the blinds closed, all gravitational forces are blocked from the sphere; with one or more blinds open, the sphere is once again subject to the gravitational pull of the nearest large object. In this fashion, the intrepid explorers make their way to the moon.The moon they discover is not barren; in daylight, a bevy of plants emerge from the ground only to wither and die as the lunar night returns. When the explorers lose their way, they are captured and taken underground. While Cavor wants to communicate with the Selenites, as he immediately dubs the lunar inhabitants, Bedford is more concerned with escape and eventually effects just that, having found the moon dwellers easy prey to his strong, earthgrown muscles. The two men search for the sphere, but Bedford is forced to escape the moon alone after learning that Cavor has been captured and presumably killed. Bedford returns to earth, tells his story to some incredulous beach dwellers, and then finds the sphere hijacked by a young boy (who flies off and is never heard from again). Thus, he has no way of returning to the moon, nor does he have the knowledge required to make more Cavorite. A short time later, Bedford is amazed to learn that Cavor is not dead and is in fact sending radio signals from the moon to the earth. The rest of the novel relates the story of Cavor's stay on the moon, culminating in a description of his interview with the Grand Lunar. In lunar society, each individual is assigned a certain job and is trained and even surgically altered to do that job and nothing else. Cavor's description of earthly society is a revelation to the lunar inhabitants; through his words, Wells seems to point out some of the follies of mankind, particularly war. Thus, the book ends on so

Maybe my favorite sci-fi book of all

Published by Thriftbooks.com User , 21 years ago
What always gets me with Wells is the forcefulness of his imagination -- his ability to construct powerful, symbolically resonant setpieces based upon the scientific ideas of his time. In the final pages of "The Time Machine" he gave us one of the great apocalyptic visions in all of literature. In "The First Men in the Moon," he gives us a magnificently alien setting, full of bizarre moments -- jumping about the lunar surface in 1/6 G; the Giddy Bridge and the Fight in the Cave of the Moon-Butchers; the bizarre lunar ecology, in which all the plants die every night and are reborn each dawn.Scientifically, much of this stuff doesn't hold up after a hundred years. And the device he comes up with to get his characters to the moon -- Cavorite -- is without basis, an arbitrary magical tool not unlike the time machine. Even when Wells' science is iffy, though, he presents it in such a clear, convincing fashion that you are only too glad to suspend disbelief while the story unfolds.In the Selenites we have a metaphor for a different type of society -- rigidly hierarchical, with the needs of the individual sublimated to the whole. The metaphor obviously comes from social insects; though it became a sci-fi cliche, it was still fresh circa 1901. In the remarkable last section of the book (Cavor's communications from the moon), Wells describes the Selenite society with delightful attention to detail. He ends with a haunting, unforgettable image, and probably the best closing sentence of any sci-fi novel.

Published by Thriftbooks.com User , 22 years ago
The notes to The First Men In The Moon's text were truly informative.You can find out much about the times,as well as the advancement of the telegraph as well as ideas had at the turn of the century concerning space-travel.Wells was much,much more than a science-fiction writer.

Published by Thriftbooks.com User , 22 years ago
The book starts at the end. A very unique, yet often used form of writing. The man who lands from the moon immediately is picked up by a small fishing boat. He then is transfered over to a man who has a "wireless" and is picking up signals from the moon. The man who landed tells his journey from the start all the way to the end when he recalls when he lands in the ocean. It kept me at the edge of my seat. The actors did a great job of describing and acting the characters.

The First Men in the Moon Mentions in Our Blog