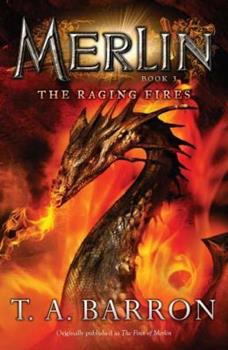 In this the third story in his Arthurian epic, T. A. Barron adds a thrilling new dimension to the legend of Merlin. Wings of Fire, the sleeping dragon, has awakened, threatening to loose his terrible wrath on all of Fincayra. Only young Merlin, grandson of the great wizard Tuatha, can stop him, though the price may well be the young wizard's life.But before he can face the dragon's fires, Merlin must endure fires of other kinds--including those within...

AMAZING! A MUST READ FANTASY THAT WILL TOUCH THE SOUL

Published by Thriftbooks.com User , 20 years ago
This was all in all a great book. Once again, in the land of Fincayra, there is trouble. An old prophecy seems to state the sure death of Merlin when an old dragon awakes from his ever so long slumber. Due to past help from the dwarves, Merlin now owes them a favor-even if it means certain death. This book is filled with tricks and treachery as you travel with Merlin on this great adventure, seeking what is right and just. When he is put to the final test he realizes that all things have their place in the world and some of the truest power comes from within. Come and explore Fincayra with Merlin and his friends and experience magic in some of its earliest forms. Dravia, dravia Fincayra. (Live long, live long Fincayra.)

Published by Thriftbooks.com User , 21 years ago
This book is the 3rd book in a 5 book series (the last hasn't been published yet). It is the continuation of the story of Merlin before he became aurthur's mentor. In this book Merlin has just completed training as a wizard which includes making an instrument. Just as Merlin is about to test his instrument and see if he can indeed be a wizard. Urnalda of the dwarves who readers met in the last book summons Merlin to help save her people. As it turns out the "darkest day"on Fincayra has come and the greatest of all dragons, Valdereg, has awoken from the enchanted sleep he had been put in by Merlins grandfather, Tuatha. As Merlin reaches Urnalda he realizes he has walked right into a trap. He escapes and a random act of kindness doesn't go unrewarded. The prophesy speaking of Valdereg's awakening and of the only way to defeat him and who the only one to defeat him can be is interpted all wrong and Merlin sets out to find out why it was the dragon and Fincayra's darkest day and on the way meets many strange and ineresting characters and a new race of people is introduced. Merlin must trust his own wit, instinct, and his heart to find out more about the dragon and a suspious race of winged creatures, magic eaters, that were supposedly extict long ago but now roaming Fincayra in ever increasing numbers. This book combines wit, humor, fantasy, love, terror, revenge, and true kindness in a wonderful blend that keeps the reader entralled throughout the story. This is a must read book and once you start you can't put it down. The only unsatifying bit is that Rhia who readers will remember from the first 2 books has a very small part in this book which is upseting since she is a terrific character and the female who takes her place in these books is not as fully developed.

A glorious addition to some of the best Arthurian lit ever

Published by Thriftbooks.com User , 21 years ago
A great third novel in what may be the most imaginative and inspired account of Merlin ever. I wonder if TA Barron will ever do his own version of later Arthurian myth--he'd do it better than anyone else.Young Emrys Merlin is just managing to relax after the devastating events of the second book, with his sister Rhia and his mother Elen. But their vacation is cut short when a horrific creature appears in the skies: A kreelix, sort of a magic vampire. They were supposedly extinct, but have reappeared. In addition, Valdearg, one of the last dragons in Fincayra, is on the warpath: Someone killed his newborn dragon hatchlings, and he is going to kill whoever did it.This book is another talented romp by the clearly-inspired TA Barron, full of the same effervescent characters and colorful places as the previous books. Merlin is a little older, a little wiser, and still the same lovable guy as ever.My little quibble: The kreelixes. Their function is intriguing, but they feel a bit misplaced. Their name and the description of them resemble something more out of Star Trek than Fincayra. However, this is the ONLY problem, and is therefore a teeny one.Valdearg is my favorite dragon in literature or movie: He's an aggressive, homicidal creature, but at the same time he's endearing. He's not evil, and the things that he does are portrayed as part of his nature.Some things will definitely not make sense unless you read "Lost Years" and "Seven Songs", but that's a pretty minor requirement for such good stuff!

Definitely another great novel in the Merlin series!

Published by Thriftbooks.com User , 21 years ago
Book 3 is another great work added to T.A. Barron's fantastic series. In this story, Merlin must solve an ancient riddle and confront a fierce dragon, in what seems to be an event that will claim the young wizard's life. Besides that, there is the dreaded kreelix, the magic-destroying animal which was thought to have been distinct years before. While Merlin searches for the answer to the riddle and the culprit in the mysterious killing of the dragon's eggs, he meets Hallia and her brother Eremon, two brave and loyal deer people, who are brother and sister. He must also confront Domnu, in hopes of regaining the treasured Galator. In The Fires of Merlin, the wizard matures even more, and discovers much about himself, friendship, and bravery that he never knew before. An entertaining read, number 3 is definitely a must-read book!

Published by Thriftbooks.com User , 22 years ago
this book gives another level of understanding Merlin a littie bit more.I've also read the other two books in this series, but I think this one is a must read for fantasy lovers(Ialso think you should read the other ones in order before you read this one).I can't wait to read The Mirror of Merlin.I like the way this book explians why everyone is trying to kill him or give him to the dragon.This book ,and all of the rest of The Lost Years of Merlin books,always explian whats going on so you arent left in the "dust".
Copyright © 2020 Thriftbooks.com Terms of Use | Privacy Policy | Do Not Sell My Personal Information | Accessibility Statement
ThriftBooks® and the ThriftBooks® logo are registered trademarks of Thrift Books Global, LLC