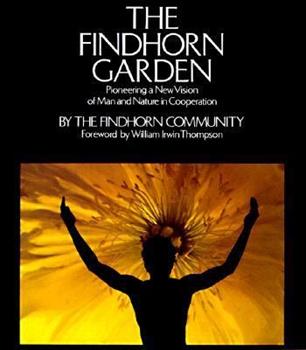 The Findhorn Garden: Pioneering a New Vision of Man and Nature in Cooperation

by The Findhorn Community

Newly updated to showcase color photographs, this spiritual classic presents the history and philosophy of Scotland's Findhorn Community. Findhorn was founded more than 40 years ago in far northeast... This description may be from another edition of this product.

Published by Thriftbooks.com User , 16 years ago
I became attached to The Findhorn Foundation before reading any of the publications that have made it famous. It is an amazing place, and although I did not personally connect with Nature Spirits during any of my visits, I did have what I can only call spiritual experiences that prevent me from doubting any one else's connections to energy we don't understand. To those who have placed reviews that judge the place without going there, you should open your minds. It is not a hoax, but a place where many people are able to access a different perception of life. Findhorn really isn't about gardening, but about people and their relationship to the earth and each other. That's what makes this book so beautiful. It gives us an insider's look at some of the Founding members of a place that has nutured a diverse collection of caring, open minded, peole. Findhorn Foundation members have been advisors to the UN and are on the leading edge of the Ecovillage movement, reforestation, herbal remedies, spiritual and personal development, and alternative medicices that have all come closer to the mainstream since the 1960's. For me, The Findhorn Garden is both a history of a place I love, and an inspiration in keeping my mind open to the infinite possibilities of the universe -- even though I'm quite happy just having an ordinary life with an ordinary garden!

Published by Thriftbooks.com User , 17 years ago
This book gets you thinking about why some people's gardens flourish and others perish under the same conditions. Second half of the book gets a bit tedious in places, but worth a read.

Published by Thriftbooks.com User , 17 years ago
This book is lovely and fun! Sure its concepts are also outrageous to the logical mind, but remember so was microbiology 100 years ago. The controversy of this book doesn't reach the underlying meaning: Through a lot of love, humility, faith and hard work you can lead a gentle and honerable life that creates beauty and gives life and hope where it appears hopeless. Even if you think you can't hear nature spirits and they are someone else's imagination, you can still find strength and peace while working with the natural world. Plus the more people learn to appreciate and love the natural world as part of us, the more we will collectively be able to hold for the future. The people who founded Findhorn are inspiring on many levels. It is wonderful.

Published by Thriftbooks.com User , 19 years ago
This is a book of conversations and pictures with each of the founders of the Findhorn garden and community. The most remarkable thing about Findhorn is that it is a flourishing garden with plants from every climate (even tropical), growing many times normal size, in sand in Scotland, of all places! Throughout the years horticulturists have tested the soil and declared the results incomprehensible, even impossible. Findhorn also does not use pesticide, but instead talks to the insects and makes agreements about what the insects eat and what they don't (after all, we wouldn't have anything without them and they should get their share of Earth's bounty!). The candid thoughts in the book, simply expressed, gave me the shivers, they felt so true. I can only read it in spurts because after only a page or 2, there is so much to digest and think about. The pictures are only in black & white, but I find myself constantly looking at them in awe of the Joy and Life coming through in the people and the plants. This would be a great book for environmental scientists to read, as we move into a unique time where serious decisions will have to be made about natural resources and how to use our waste. The Findhorn community presents an idea that things would be so much easier for us if we allowed the veil to come down that exists between man, beast, and the spirit world. According to them, the Universe is full of helpful entities who genuinely WANT life to continue and for us to create heaven on Earth.

The Magical Garden that Talks Back

Published by Thriftbooks.com User , 22 years ago
This is one of those extraordinary books, like those of Carlos Castaneda, that, whether you believe them or not, are valuable for the way they open your mind to new possibilities. There really was a wonderful, unexplainable (in normal terms) garden at Findhorn, and people came from far and wide to see it. This book tells the story of how that garden came to be. Personally, I squirm at some of the assertions about the channeling of nature spirits. However, over the years I have recommended this book to a number of people, because it unsentimentally makes a human-nature connection that is real but rarely mentioned. The second half of the book is dull and unnecessary to its main point, but I and others I know have reread the first half many times. If you are interested in human-nature connections, or if you like to have books that remind you that life and the world are larger than our views of them, you want The Findhorn Garden in your library.
Copyright © 2022 Thriftbooks.com Terms of Use | Privacy Policy | Do Not Sell My Personal Information | Accessibility Statement
ThriftBooks® and the ThriftBooks® logo are registered trademarks of Thrift Books Global, LLC