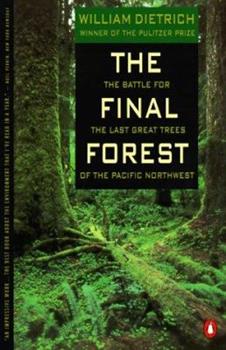 The Final Forest: The Battle for the Last Great Trees of the Pacific Northwest

In a riveting exploration of our connection to all that we cherish and exploit on Earth, a Pulitzer Prize-winning correspondent for The Seattle Times examines the human side of the struggle that looms... This description may be from another edition of this product.

thoughts from a logger, cutter, environmentalist and more

Published by Thriftbooks.com User , 14 years ago
This book was very interesting and well-written. Dietrich uses descriptive language that makes you feel like the mountains are right out your window. The organization of the book also made it easy to read and understand everyone's individual stories and viewpoints on the issue of the forest. It was interesting to hear the logger's and cutter's stories because they are so attached to the forest in such a different way than we normally hear about, such as from biologists or environmentalists. They talk about even what they wear to work and how if their job wasn't in the forest, they would be changed because the forest is all they know. The way the controversy was brought up because of the owl also shows the impact it has in the forest. The trees that make up the forest are some of the largest in the world, so when a large political and environmental debate is brought up because of an owl, it is quite amazing. The book focused mostly on human-environment interaction. Every person has their own ideas that matter to the forest as an ecosystem, place of work, and a place to study the environment making this book a very interesting read.

Published by Thriftbooks.com User , 17 years ago
We use this book on NOLS expeditions specifically because it treats conservation as a dilemma of competing moral values. It really helps our students, whether they are greenies or industrialists, to see all sides of an issue. And if we choose to carry a book like this at NOLS, it means we literally carry it in a backpack for the entire 30 day expedition, which speaks highly for the value of this book.

Published by Thriftbooks.com User , 17 years ago
"I hope you read it [the book] for whatever understanding it provides. Then, when you get a chance, go and read the living things that it came from." This, the last sentence in the book, powerfully wraps up an engrossing examination of both sides of the controversy on logging old-growth forests. Always on the side of the environmentalists, I came to understand and sympathize with the loggers who cut them down. Not an easy task for any writer to undertake. But Dietrich has done it, and done it well. No wonder he won a Pulitzer Prize. The writing is clear and sharp, and at times, poetic in imagery. Yes, I have been to the Olympic old-growth forests of which he speaks, and he is right when he says that the minute you enter them, there is magic. Even the loggers feel this. The stories of individuals, both on the side of timber and the side of trees, eloquently speak of passions and lifestyles, battles won and lost. Anita Goos is not someone I will soon forget. Dietrich tells of men and women who choose their battles, sometimes unwillingly, but who enter the fray with hearts and minds wholly in the cause. It is well to follow this book with "The Hidden Forest" by Jon Luoma, written seven years later.

this book is great!

Published by Thriftbooks.com User , 18 years ago
I read this book for my research paper on old growth forests. Originally I was going to just try to fly through it and take out the information that I needed for my paper, but as I read it I got really into it and almost forgot about my paper altogether! I think the best thing about this book is that it represents all sides of the issue. William Dietrich talks to cutters, truck drivers, biologists, environmentalists, foresters, and the community itself and tells all sides of the situation in his book. When I originally chose to do my paper on preservation of old growth forests, I was completely against cutting down of trees, and even though I am still not exactly for it, this book really helped me to be more open-minded and understand the different point of views...

All sides of the story

Published by Thriftbooks.com User , 21 years ago
I gained a deeper understanding of the conflicts surrounding forestry in the Pacific Northwest. The stories told in this book could never be explained or understood in a 30 second television news broadcast. And while much of the news is depressing, this book offers hope for a brighter future where science, conservation, forestry, and consumer interests can meet for the future use of our forest resources.
Trustpilot
Copyright © 2022 Thriftbooks.com Terms of Use | Privacy Policy | Do Not Sell My Personal Information | Cookie Preferences | Accessibility Statement
ThriftBooks® and the ThriftBooks® logo are registered trademarks of Thrift Books Global, LLC